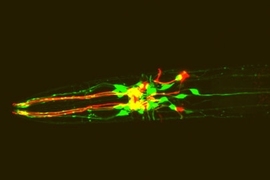 Caption:
C. elegans expressing red fluorescent protein in dopamine neurons and green fluorescent protein in dopamine receptor-expressing neurons.
Credits:
Image courtesy of Niels Ringstad/MIT
Although the tiny roundworm Caenorhabditis elegans has only 302 neurons in its entire nervous system, studies of this simple animal have significantly advanced our understanding of human brain function because it shares many genes and neurochemical signaling molecules with humans. Now MIT researchers have found novel C. elegans neurochemical receptors, the discovery of which could lead to new therapeutic targets for psychiatric disorders if similar receptors are found in humans.

Dopamine and serotonin are members of a class of neurochemicals called biogenic amines, which function in neuronal circuitry throughout the brain. Many drugs used to treat psychiatric disorders, including depression and schizophrenia, target these signaling systems, as do cocaine and other drugs of abuse. Scientists have long known of a class of biogenic-amine receptors that are G protein-coupled receptors (GPCRs) and that, when activated, trigger a slow but long-lasting cascade of intracellular events that modulate nervous system activity.

A study in the July 3 issue of Science has found that in C. elegans these chemicals also act on receptors of a fundamentally different type. These receptors are chloride channels that open and close quickly in response to the binding of a neurochemical messenger. By allowing the passage of negatively charged chloride ions across the cell membrane, chloride channels can rapidly inactivate nerve cells.

"These results underscore the importance of determining whether, as in the C. elegans nervous system, a diversity of biogenic amine-gated chloride channels function in the human brain," said H. Robert Horvitz of the McGovern Institute for Brain Research at MIT and senior author of the study. "If so, such channels might define novel therapeutic targets for neuropsychiatric disorders, such as depression and schizophrenia."

In 2000, Horvitz's group discovered that serotonin activates a chloride channel they called MOD-1, which inhibits neuronal activity in C. elegans.

In the current study, Niels Ringstad and Namiko Abe, a postdoctoral researcher and an undergraduate in Horvitz's laboratory, respectively, looked for other ion channels that could be receptors for biogenic amines. Using both in vitro and in vivo methods, they surveyed the functions of 26 ion channels similar to MOD-1 and found three additional ion channels with an affinity for biogenic amines: dopamine activates one, serotonin another, and tyramine (the role of which in the human brain is unknown) a third. All three were chloride channels, like MOD-1.

"We now have four members of a family of chloride channels that can act as receptors for biogenic amines in the worm," Ringstad said. "That these neurochemicals activate both GPCRs and ion channels means that they can have very complex actions in the nervous system, both as slow-acting neuromodulators and as fast-acting inhibitory neurotransmitters."

It is unknown as yet whether an equivalent to this new class of worm receptor exists in the human brain, but Horvitz points out that worms have proved remarkably informative for providing insights into human biology. In 2002, Horvitz shared the Nobel Prize in Physiology or Medicine for the discovery based on studies of C. elegans of the mechanism of programmed cell death, a central feature of some neurodegenerative diseases and many other disorders in humans.

"Historically, studies of C. elegans have delineated mechanisms of neurotransmission that subsequently proved to be conserved in humans," says Horvitz, the David H. Koch Professor of Biology at MIT and a Howard Hughes Medical Institute Investigator. "The next step is to look for chloride channels controlled by biogenic amines in mammalian neurons."

This study was supported by the NIH, the Howard Hughes Medical Institute, the Life Sciences Research Foundation, and The Medical Foundation.