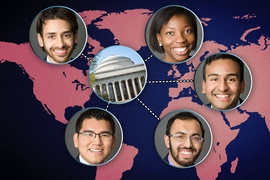 The Paul and Daisy Soros Fellowships for New Americans, the premier graduate school fellowship for immigrants and children of immigrants, has announced their 2016 recipients. The 30 awardees include three Harvard-MIT Program in Health Sciences and Technology (HST) students and two additional MIT alumni, selected for their potential to make significant contributions to U.S. society, culture, or their academic field.

The three HST students are Vishwajith Sridharan, who is from southern India and is enrolled in the HST medical degree program as well as an MBA program at Harvard University; Suan Lian Tuang ’14, a native of Myanmar; and Eran Hodis from Israel. Tuang and Hodis are both pursuing MD-PhD degrees in the HST program.

The two MIT alumni honored include Abubakar Abid ’15, who is from Pakistan, and Lindsey Osimiri ’14, daughter of Nigerian immigrants. Grad student Suan Tuang also received his undergraduate degree in chemistry from MIT in 2014.

“The Fellows are from all different countries and socio-economic and religious backgrounds, and they have come to the United States in a myriad of ways – some were born here, while others are asylum seekers, refugees, and green card holders – but they all bring excellence to the table," said Craig Harwood, who directs the Fellowship program. “They demonstrate that immigrants, regardless of their background, continue to be a critical part of our nation.”

Sridharan was born and raised in southern India. His grandmother, who had limited education, cared for him while his mother worked many jobs and his father sent money home from the United States. At the age of 9, Sridharan, his mother, and his sister were reunited with his father in New Jersey, where he began third grade. He worked hard to catch up with his classmates. Soon Sridharan was excelling, and by the age of 15, he was working at Children’s Hospital in Washington, where he spent multiple years developing novel HIV vaccine models, one of which was patented.

Sridharan lost his grandmother to abdominal cancer the same year he was admitted to the University of North Carolina at Chapel Hill for his undergraduate studies and so he changed his focus to cancer. Sridharan’s National Science Foundation-funded college research on protein thermodynamics led to publications in Molecular Cell and the ACS Journal Biochemistry, and also earned recognition from the Goldwater Scholarship Foundation.

Sridharan is interested in working with vulnerable populations across the globe. He has traveled to Uganda and helped set up health care infrastructure in rural villages and has also held an internship with the United Nations in Switzerland, working to develop guidelines regarding hazardous chemicals management for resource-poor countries.

Sridharan is now working towards his MD in the Harvard-MIT Program in Health Sciences and Technology, where he is investigating immunotherapy in the treatment of cancer. He is also pursuing an MBA at Harvard Business School. He hopes to develop translational therapeutics in the lab, bring them to market, and make a difference in cancer care among underserved communities.

Tuang was born and raised in rural Tedim in northwestern Myanmar. His family, practicing Christians and members of the Zomi ethnic group, immigrated to Orlando, Florida.

Seeing education as a key to helping his family overcome their socioeconomic situation, Tuang entered high school in the U.S. as a junior, fully determined to succeed. With the mentorship of a teacher, Jacquelyn Gomez, who instilled in him the belief that he could realize any dream in America despite his background, he was accepted to MIT with full financial aid.

As an undergraduate at MIT, Tuang developed an interest in chemistry and conducted research in bioinorganic chemistry and systems biology as an Amgen scholar. He worked in the labs of Stephen Lippard at MIT and Ralph Weissleder at Massachusetts General Hospital.

Having benefited from service projects during his childhood in Myanmar, Tuang sought to implement community-centered service projects around the world. He served as the president of MIT’s International Development House (iHouse) and developed a passion for teaching, serving as a teaching assistant for two undergraduate classes and received the Frederick D. Greene Teaching Award. During his senior year, he was awarded the Albert G. Hill Prize.

In 2014, after receiving his BS from MIT, Tuang became a United States citizen. He is now pursing an MD in the Harvard-MIT Program in Health Sciences and Technology, and a PhD in chemistry at MIT. He is currently working in Bradley Pentelute’s laboratory. Tuang hopes to combine his chemistry expertise and medical knowledge to treat infectious diseases and neglected tropical diseases. Guided by his faith, he aims to apply his training to help others.

Born in Haifa, Israel, Hodis is the son of Israeli immigrants. When his father’s employer offered relocation to the United States, his parents jumped at the chance to pursue the American dream and one day become U.S. citizens. Hodis learned to appreciate hard work and the value of education, inspired by the example of his parents and their efforts to make a fulfilling life in a new country.

Fascinated by math and science from a young age, Hodis relished any opportunity he had to pursue advanced coursework as he progressed through the Massachusetts public school system. After earning a bachelor’s in math and biology from Boston University, where he was a University Scholar, Hodis returned to Israel to study computational biology as a graduate student at the Weizmann Institute of Science.

When his mother was diagnosed with cancer, Hodis moved back to Boston to be with his immediate family and resolved to refocus his research efforts on cancer.

Hodis’ subsequent research in cancer genomics at the Broad Institute of MIT and Harvard and the Dana-Farber Cancer Institute has led to landmark advances in the field. His work has been published in Nature, Science, Cell, and Nature Genetics and highlighted on the front page of The New York Times. In 2015 Hodis was named among the Forbes’ “30 Under 30” in science.

Outside of the research lab, he has shared his excitement for science with students by co-creating and co-teaching a highly-rated course in computational biology at Harvard College.

Hodis is currently an HST MD-PhD student, working toward a PhD in biophysics. He would like to imagine a world where cancer is a “friendlier” disease and believes this can be accomplished through scientific research.

A 2015 MIT graduate, Abubakar Abid plans to pursue a PhD in electrical engineering at Stanford University. Born in Pakistan, Abid came to the U.S. at the age of 1 and grew up in Friendship, Wisconsin. At MIT, Abid majored in electrical engineering and computer science, with a focus on applications in biology and medicine. He also started an initiative to mentor immigrant high school students in the Boston area.

For his PhD research, Abid will work on building medical devices that can stay in the human body for extended periods of time to provide unique, patient-specific biomedical information to help diagnose diseases and provide real-time feedback.

The daughter of Nigerian immigrants, Osimiri was raised in Texas. At MIT, she majored in biological engineering, and applied her diverse interests to the field of systems biology. Osimiri worked in several MIT research labs, and after graduation took a position as a computational biology research associate at the consulting firm Selventa. In her PhD research she uses algorithms to analyze and predict the functions of complex biological systems, and she plans to eventually return to industry to create tools to make biological research more efficient.

Daisy M. Soros and Paul Soros founded the Paul and Daisy Soros Fellowships for New Americans in 1997. The couple, both Hungarian immigrants, has contributed $75 million to the organization's charitable trust, and the fellowship program has awarded more than 550 fellowships over its 18-year history.

In addition to receiving up to $90,000 in funding for the graduate program of their choice, each new fellow joins a prestigious community of past recipients. This year’s 30 winners were selected from a pool of 1,443 applicants with a 2 percent acceptance rate, making this the most competitive year in the fellowship’s history. Eight MIT students and alumni have won Soros Fellowships since 2013.

Individuals can learn more about the fellowship, current fellows, and the 2017 application at the program's website. Applications are due on Nov. 1 at 11:59 p.m. EDT.

Across an ocean, finding his dream