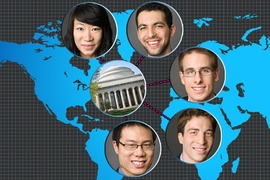 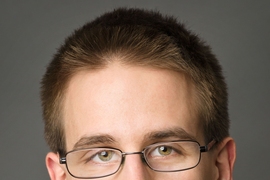 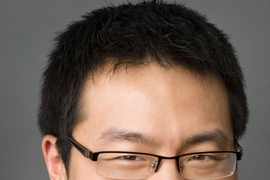 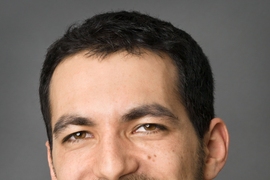 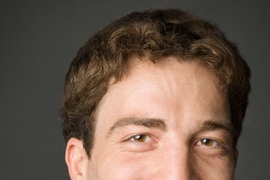 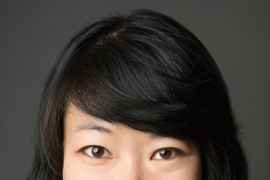 Four MIT graduate students and an alumnus are among 30 new recipients nationwide of the Paul and Daisy Soros Fellowships for New Americans.

The four current or incoming MIT graduate students who have won Soros Fellowships are Stephanie Speirs, whose mother emigrated from Korea, and who will pursue an MBA at the MIT Sloan School of Management; Yakir Reshef, from Israel, and Andre Shomorony, from Brazil, both of whom are currently enrolled in the Harvard-MIT Health Sciences and Technology (HST) program; and Krzysztof Franaszek, from Poland, who will enroll in HST this spring.

In addition, alumnus Allen Lin ’11, MEng ’11, whose parents are Taiwanese immigrants, will use his Soros Fellowship to pursue a PhD in systems biology at Harvard University.

The Soros Fellowships, established in 1997, award $90,000 for immigrants and children of immigrants to complete graduate studies in the United States. Applicants may propose graduate work in any discipline, and are selected for their potential to make significant contributions to American society, culture, or their academic field.

This year’s 30 winners were selected from a pool of 1,200 applicants. Including this year’s winners, 18 MIT students and alumni have won Soros Fellowships since 2010. 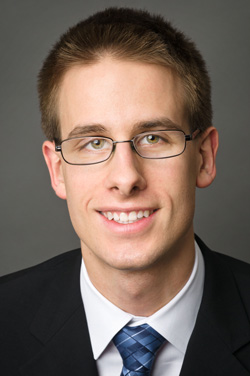 Krzysztof Franaszek emigrated from Poland with his parents; his father, a theoretical physicist, and his mother, a neuropharmacologist, both now work at federal research institutions in Maryland. With an interest in biological science and technology, Franaszek completed his undergraduate degree in cell biology and economics at the University of Maryland; as an undergraduate, he was named as a Howard Hughes Medical Institute Undergraduate Research Fellow.

Franaszek, who aspires to establish a biotechnology and medical research company to develop treatments for age-dependent diseases, is pursuing training as a physician-scientist. With a Gates-Cambridge Scholarship, he is currently completing a PhD in pathology at Cambridge University, focusing on how molecular genetics techniques can combat viral diseases; Franaszek’s Soros Fellowship will allow him to pursue an MD through the HST. 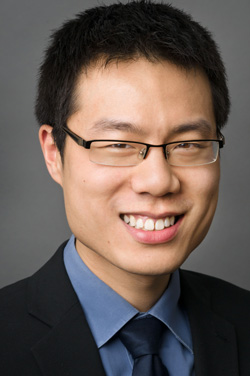 Alumnus Allen Lin, whose parents emigrated from Taiwan, grew up in New Jersey. He came to MIT with an interest in complex systems; as an undergraduate, he immersed himself in the study of synthetic biology, computer science, technology policy, and public health.

In 2011, Lin was named a Marshall Scholar; as an MIT undergraduate, he also received a Barry M. Goldwater Scholarship and a Department of Homeland Security Scholarship for his research.

Lin holds three degrees from MIT, all awarded in 2011: a bachelor’s in electrical engineering and computer science (EECS), and in biological-chemical engineering, and a master’s in EECS. Following his graduation, Lin’s Marshall Scholarship allowed him to complete an MPhil in technology policy at Cambridge University, followed by an MS in public health at the London School of Hygiene and Tropical Medicine. 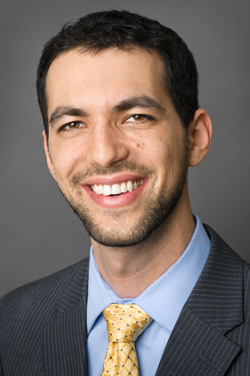 HST graduate student Yakir Reshef, whose father is Romanian and mother is Iraqi, was born in Israel and spent his early childhood in a suburb of Jerusalem. He then moved to Kenya with his parents, who work in the medical and public health fields, before the family settled in Maryland.

Passionate about math and computer science, Reshef majored in mathematics as an undergraduate at Harvard, where he developed a method to detect associations between pairs of variables in large data sets. This research resulted in a publication in the journal Science. After completing his undergraduate work, Reshef returned to Israel as a Fulbright Scholar, conducting research in mathematics and computer science at the Weizmann Institute of Science.

Reshef, who aims to use his computational knowledge to analyze medical data and improve outcomes for patients, is now training as a physician-scientist. The Soros Fellowship will support his studies in HST, through which he plans to obtain an MD and a PhD in computer science. 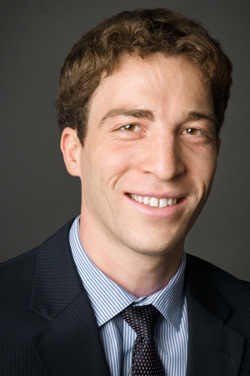 Andre Shomorony grew up in Rio de Janeiro, in a family with Jewish and European roots. When Shomorony was 15, his parents, who were engineers in Brazil, decided to move with their three sons to Florida. The transition was difficult: Shomorony had to learn English, and adapt to a new culture, while his parents struggled to find stable employment.

Despite these difficulties, Shomorony won a full scholarship to Yale University through QuestBridge, an organization that supports low-income, high-achieving students. When his father developed pancreatic cancer, Shomorony turned his interests toward biomedical research. At Yale, he studied the development of techniques to generate tissues for use in transplantation, stem-cell therapy, and reconstructive surgery — work that resulted in a paper in the journal Chemistry Letters on which he was first author. He has since worked at Boston Children’s Hospital, developing a technique for noninvasive, extracorporeal blood filtration to treat sepsis.

Driven by his interests in research, clinical work, and serving underrepresented patient populations, Shomorony enrolled in HST, pursuing an MD while conducting biomedical engineering research. Ultimately, he wants to use his background in biomedical engineering to improve surgical procedures. As an aspiring physician, he intends to work at the intersection of reconstructive plastic surgery, otolaryngology, and surgical oncology. 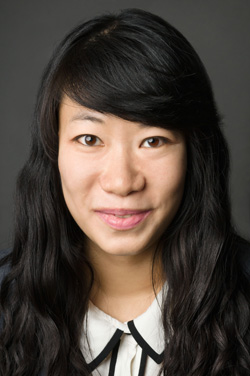 Born in Hawaii, Stephanie Speirs was raised by a single mother who emigrated from Korea. Growing up with two siblings, Speirs gained an appreciation for hard work at an early age, earning money to help her mother with expenses. Through these early experiences, she became committed to domestic and international social change.

Speirs received her bachelor’s degree from Yale, and then earned a master’s degree from Princeton University in public affairs and international development. Her interest in government led Speirs to work as a field organizer for Barack Obama’s 2008 presidential campaign; she then went on to work at the National Security Council (NSC), developing policy for the Middle East. In her work at the NSC, Speirs traveled to Yemen and Pakistan, where she focused on economic development.

Speirs’ passion for international development led her to become a fellow at Acumen, a nonprofit venture capital fund that works to reduce poverty in the developing world. In addition, Speirs co-founded Solstice Initiative, a nonprofit whose mission is to give low-income households access to solar energy.

The Soros Fellowship will allow Speirs to complete her MBA at MIT Sloan, giving her the business knowledge to continue developing Solstice Initiative, and furthering her work as an agent of social change.