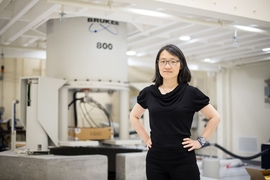 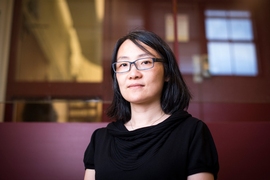 Cell membranes are fluid, chaotic structures composed mainly of fatty molecules. Forming critical barriers between cells’ contents and their surroundings, these membranes also contain important proteins that allow cells to communicate with the outside world.

Such membrane-bound proteins are difficult to study because they change their structure when removed from membranes and therefore must be analyzed in place. Mei Hong, an MIT professor of chemistry who has spent much of her career studying membranes and the proteins embedded in them, embraces that complexity.

“You have to be willing to spend time measuring under conditions where the signals are not very pretty, but it tells you a lot. Those dynamics are something that a lot of people don’t quite want to deal with,” she says. “But it’s extremely important because so many drug targets are membrane proteins.”

Hong, who joined MIT’s faculty in 2014 as a tenured professor after 15 years at Iowa State University, has developed many novel techniques that use nuclear magnetic resonance (NMR) spectroscopy to reveal precise information about the structure of these complicated proteins.

“My lab’s goal is to really provide molecular insight, using NMR spectroscopy to answer a lot of structural, dynamic, and mechanistic questions,” she says.

Hong grew up in China and attended Fudan University in Shanghai. Interested in both sciences and humanities, she began studying economics, a popular choice in China in the late 1980s. However, after a year of economics, Hong realized it wasn’t a good fit and switched to chemistry, which she found appealing because “it’s centrally positioned between physics and biology, so you can branch out in both directions,” she says.

She transferred to Mount Holyoke College in Massachusetts for her last two years of college, where she worked in a physical chemistry lab using laser spectroscopy, which uses high-energy laser pulses to study atoms and molecules over extremely short timescales.

From there, she went to the University of California at Berkeley to pursue a PhD in chemistry. She expected to continue studying laser spectroscopy, but near the end of a tour of Berkeley’s physical chemistry labs, she happened to visit a lab that focused on NMR spectroscopy. Though she had never used it before, NMR intrigued her.

“At the last stop, I decided to switch to NMR spectroscopy. It was a good decision,” Hong says. “A lot of students come to graduate school and do something that they have been exposed to before. It’s rare to do something completely different, but I thought the nuclear spin Hamiltonians in NMR seemed more interesting.”

For her PhD thesis, Hong used NMR to study how phospholipids, the major building blocks of membranes, take on their shapes. These molecules consist of fatty tails that face inward and protein heads that face outward. This research helped prepare her for her future work studying proteins embedded in cell membranes.

“It did lay a lot of groundwork for thinking later on about membrane proteins. You need to know the lipid membrane environment, their conformation, their dynamics, the feel for it,” she says.

After finishing her PhD, she came to MIT as a postdoc in chemistry professor Robert Griffin’s lab, where she developed techniques for measuring torsion angles in proteins, which help to reveal the structure of the proteins’ amino acid backbone. She then taught at the University of Massachusetts for a couple of years before going to Iowa State University.

Over her career, Hong has developed several NMR techniques that allow her to better understand the structure of membrane-embedded proteins and other biological molecules. NMR, which uses the magnetic properties of atomic nuclei to reveal the structures of the molecules containing those nuclei, often relies on labeling the proteins of interest with an isotope of carbon known as carbon-13. Interactions between the carbon-13 atoms generate signals that allow scientists to interpret the proteins’ structure.

Early in Hong’s career, NMR researchers were labeling just a few carbon atoms per protein, which limited the information content of each measurement. Hong came up with a way to selectively label more of the carbon atoms — but not so many as to make the carbon-carbon interactions too numerous and difficult to interpret.

Among the proteins Hong has studied using these techniques is the influenza M2 protein, which forms a proton channel and is embedded in membrane that forms the influenza viral envelope. The influenza drugs amantadine and rimantadine interfere with the M2 protein, preventing the virus from infecting host cells.

“We did a lot of studies to figure out how drugs bind to it and what’s the drug-bound structure,” Hong says.

She is now also studying the structure and dynamics of virus fusion proteins, which are embedded in the viral envelope and help viruses to fuse to the cells they are infecting. “If you can inhibit these fusion proteins then you could stop the very first entry step, which makes them good drug targets,” she says.