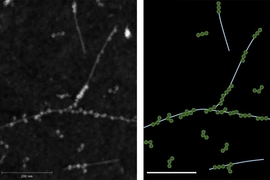 ↓ Download Image
Caption: The atomic-force microscopy (AFM) image on the left demonstrates the physical binding between fibrinogen proteins and single walled carbon nanotubes. The right shows a trace of the AFM image with the fibrinogen in green and nanotubes in light blue.
Credits: Courtesy of the researchers 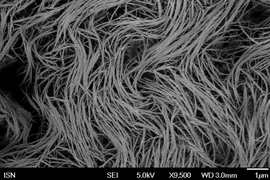 Caption:
The atomic-force microscopy (AFM) image on the left demonstrates the physical binding between fibrinogen proteins and single walled carbon nanotubes. The right shows a trace of the AFM image with the fibrinogen in green and nanotubes in light blue.

Using carbon nanotubes, MIT chemical engineers have devised a new method for detecting proteins, including fibrinogen, one of the coagulation factors critical to the blood-clotting cascade.

This approach, if developed into an implantable sensor, could be useful for monitoring patients who are taking blood thinners, allowing doctors to make sure the drugs aren’t interfering too much with blood clotting.

The new method is the first to create synthetic recognition sites (similar to natural antibodies) for proteins and to couple them directly to a powerful nanosensor such as a carbon nanotube. The researchers have also made significant progress on a similar recognition site for insulin, which could enable better monitoring of patients with diabetes. It may also be possible to use this approach to detect proteins associated with cancer or heart disease, says Michael Strano, the Carbon P. Dubbs Professor in Chemical Engineering at MIT.

Strano is the senior author of a paper describing the method in Nature Communications. Gili Bisker, a postdoc in Strano’s lab, is the paper’s lead author.

The new sensor is the latest example of a method developed in Strano’s lab, known as Corona Phase Molecular Recognition (CoPhMoRe).

This technique takes advantage of the interactions between a given polymer and a nanoparticle surface such as that of a fluorescent single-walled carbon nanotube, when the polymer is wrapped around the nanotube.

Certain regions of the polymers latch onto the nanoparticle surface like anchors, while other regions extend outwards into their environment. This outward-facing region, also known as the adsorbed phase or corona, has a 3-D structure that depends on the composition of the polymer.

CoPhMoRe works when a specific polymer adsorbs to the nanoparticle surface and creates a corona that recognizes the target molecule. These interactions are very specific, just like the binding between an antibody and its target. Binding of the target alters the carbon nanotubes’ natural fluorescence, allowing the researchers to measure how much of the target molecule is present.

Strano’s lab has previously used this approach to find recognition sites and develop nansensors for estradiol and riboflavin, among other molecules. The new paper represents their first attempt to identify corona phases that can detect proteins, which are larger, more complex, and more fragile than the molecules identified by their previous sensors.

For this study, Bisker began by screening carbon nanotubes wrapped in 20 different polymers including DNA, RNA, and polyethylene glycol (PEG), a polymer often added to drugs to increase their longevity in the bloodstream.

On their own, none of the polymers had any affinity for the 14 proteins tested, all taken from human blood. However, when the researchers tested polymer-wrapped nanotubes against the same proteins, they turned up a match between one of the modified nanotubes and fibrinogen.

“A chemist or a biologist would not be able to predict ahead of time that there should be any kind of affinity between fibrinogen and this corona phase,” Strano says. “It really is a new kind of molecular recognition.”

Fibrinogen, one of the most abundant proteins in human blood, is part of the blood-clotting cascade. When a blood vessel is damaged, an enzyme called thrombin converts fibrinogen into fibrin, a stringy protein that forms clots to seal the wound.

A sensor for fibrinogen could help doctors determine if patients who are taking blood thinners still have enough clotting capability to protect them from injury, and could allow doctors to calculate more finely tuned dosages. It could also be used to test patients’ blood clotting before they go into surgery, or to monitor wound healing, Bisker says.

The researchers believe their synthetic molecular recognition agents are an improvement over existing natural systems based on antibodies or DNA sequences known as aptamers, which are more fragile and tend to degrade over time.

“One of the advantages of this is that it’s a completely synthetic system that can have a much longer lifetime within the body,” Bisker says.

In 2013, researchers in Strano’s lab demonstrated that carbon nanotube sensors can remain active in mice for more than a year after being embedded in a polymer gel and surgically implanted under the skin.

In addition to insulin, the researchers are also interested in detecting troponin, a protein that is released by dying heart cells, or detecting proteins associated with cancer, which would be useful for monitoring the success of chemotherapy. These and other protein sensors could become critical components of devices that deliver drugs in response to a sign of illness.

“By measuring therapeutic markers in the human body in real time, we can enable drug delivery systems that are much smarter, and release drugs in precise quantities,” Strano says. “However, measurement of those biomarkers is the first step.”