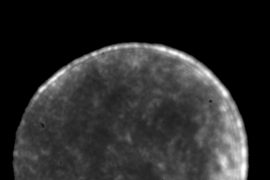 ↓ Download Image
Caption: A micrograph of the nanosensor array. The florescence of each
carbon nanotube changes in intensity upon binding to a target molecule. 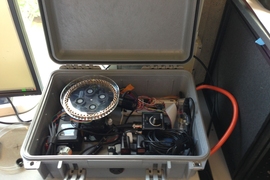 ↓ Download Image
Caption: Chemical engineering graduate student Nigel Reuel has spent much of
this year adapting his nanosensors to mobile measurement, building this
briefcase-sized detector system that can measure real-time binding kinetics of 20 to 50
different biological samples. The device will be tested at Novartis later
this year.
Credits: Photo courtesy of the researchers

Caption:
A micrograph of the nanosensor array. The florescence of each
carbon nanotube changes in intensity upon binding to a target molecule.

Caption:
Chemical engineering graduate student Nigel Reuel has spent much of
this year adapting his nanosensors to mobile measurement, building this
briefcase-sized detector system that can measure real-time binding kinetics of 20 to 50
different biological samples. The device will be tested at Novartis later
this year.
Credits:
Photo courtesy of the researchers

MIT chemical engineers have discovered that arrays of billions of nanoscale sensors have unique properties that could help pharmaceutical companies produce drugs — especially those based on antibodies — more safely and efficiently.

Using these sensors, the researchers were able to characterize variations in the binding strength of antibody drugs, which hold promise for treating cancer and other diseases. They also used the sensors to monitor the structure of antibody molecules, including whether they contain a chain of sugars that interferes with proper function.

“This could help pharmaceutical companies figure out why certain drug formulations work better than others, and may help improve their effectiveness,” says Michael Strano, an MIT professor of chemical engineering and senior author of a recent paper describing the sensors in the journal ACS Nano.

The team also demonstrated how nanosensor arrays could be used to determine which cells in a population of genetically engineered, drug-producing cells are the most productive or desirable, Strano says.

Lead author of the paper is Nigel Reuel, a graduate student in Strano’s lab. The labs of MIT faculty members Krystyn Van Vliet, Christopher Love and Dane Wittrup also contributed, along with scientists from Novartis.

Strano and other scientists have previously shown that tiny, nanometer-sized sensors, such as carbon nanotubes, offer a powerful way to detect minute quantities of a substance. Carbon nanotubes are 50,000 times thinner than a human hair, and they can bind to proteins that recognize a specific target molecule. When the target is present, it alters the fluorescent signal produced by the nanotube in a way that scientists can detect.

Some researchers are trying to exploit large arrays of nanosensors, such as carbon nanotubes or semiconducting nanowires, each customized for a different target molecule, to detect many different targets at once. In the new study, Strano and his colleagues wanted to explore unique properties that emerge from large arrays of sensors that all detect the same thing.

The first feature they discovered, through mathematical modeling and experimentation, is that uniform arrays can measure the distribution in binding strength of complex proteins such as antibodies. Antibodies are naturally occurring molecules that play a key role in the body’s ability to recognize and defend against foreign invaders. In recent years, scientists have been developing antibodies to treat disease, particularly cancer. When those antibodies bind to proteins found on cancer cells, they stimulate the body’s own immune system to attack the tumor.

For antibody drugs to be effective, they must strongly bind their target. However, the manufacturing process, which relies on nonhuman, engineered cells, does not always generate consistent, uniformly binding batches of antibodies.

Currently, drug companies use time-consuming and expensive analytical processes to test each batch and make sure it meets the regulatory standards for effectiveness. However, the new MIT sensor could make this process much faster, allowing researchers to not only better monitor and control production, but also to fine-tune the manufacturing process to generate a more consistent product.

“You could use the technology to reject batches, but ideally you’d want to use it in your upstream process development to better define culture conditions, so then you wouldn’t produce spurious lots,” Reuel says.

Another useful trait of such sensors is their ability to measure very weak binding interactions, which could also help with antibody drug manufacturing.

Antibodies are usually coated with long sugar chains through a process called glycosylation. These sugar chains are necessary for the drugs to be effective, but they are extremely hard to detect because they interact so weakly with other molecules. Drug-manufacturing organisms that synthesize antibodies are also programmed to add sugar chains, but the process is difficult to control and is strongly influenced by the cells’ environmental conditions, including temperature and acidity.

Without the appropriate glycosylation, antibodies delivered to a patient may elicit an unwanted immune response or be destroyed by the body’s cells, making them useless.

“This has been a problem for pharmaceutical companies and researchers alike, trying to measure glycosylated proteins by recognizing the carbohydrate chain,” Strano says. “What a nanosensor array can do is greatly expand the number of opportunities to detect rare binding events. You can measure what you would otherwise not be able to quantify with a single, larger sensor with the same sensitivity.”

This tool could help researchers determine the optimal conditions for the correct degree of glycosylation to occur, making it easier to consistently produce effective drugs.

The third property the researchers discovered is the ability to map the production of a molecule of interest. “One of the things you would like to do is find strains of particular organisms that produce the therapeutic that you want,” Strano says. “There are lots of ways of doing this, but none of them are easy.”

The MIT team found that by growing the cells on a surface coated with an array of nanometer-sized sensors, they could detect the location of the most productive cells. In this study, they looked for an antibody produced by engineered human embryonic kidney cells, but the system could also be tailored to other proteins and organisms.

Once the most productive cells are identified, scientists look for genes that distinguish those cells from the less productive ones and engineer a new strain that is highly productive, Strano says.

Potential applications such as monitoring drug-producing cells are what make the new technology exciting, says Lara Mahal, an associate professor of chemistry at New York University, who was not part of the research team.

“It’s potentially very powerful as a way of being able to select out colonies,” Mahal says. “Production is something that people are very interested in monitoring. You can have all of these cells growing in the same environment, yet they don’t show the same behavior.”

The researchers have built a briefcase-sized prototype of their sensor that they plan to test with Novartis, which funded the research along with the National Science Foundation.

“Carbon nanotubes coupled to protein-binding entities are interesting for several areas of bio-manufacturing as they offer great potential for online monitoring of product levels and quality. Our collaboration has shown that carbon nanotube-based fluorescent sensors are applicable for such purposes, and I am eager to follow the maturation of this technology,” says Ramon Wahl, an author of the paper and a principal scientist at Novartis.