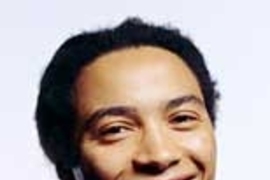 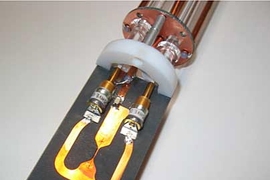 ↓ Download Image
Caption: MIT researchers created this NMR probe, which is smaller than a credit card and decreases by several orders of magnitude the amount of a protein needed to measure the protein's structure.
Credits: Photo courtesy / Yael Maguire

Caption:
MIT researchers created this NMR probe, which is smaller than a credit card and decreases by several orders of magnitude the amount of a protein needed to measure the protein's structure.
Credits:
Photo courtesy / Yael Maguire

Detecting the molecular structure of a tiny protein using nuclear magnetic resonance (NMR) currently requires two things: a million-dollar machine the size of a massive SUV, and a large sample of the protein under study.

Now, researchers from MIT's Center for Bits and Atoms report the development of a radically different approach to NMR. The new highly sensitive technique, which makes use of a microscopic detector, decreases by several orders of magnitude the amount of protein needed to measure molecular structure.

The new technology could ultimately lead to the proliferation of tabletop NMR devices in every research laboratory and medical office. Among other things, such devices could prove invaluable in diagnosing a variety of diseases.

"It's revolutionary," said Shuguang Zhang, one of the authors and associate director of MIT's Center for Biological Engineering. "It's not just incremental progress."

The research team reports the work in the online and print editions of the Proceedings of the National Academy of Sciences the week of May 14. Lead author Yael Maguire, a former MIT graduate student who earned his Ph.D. for this work, will give a talk on it May 16 at the VII European Protein Symposium in Stockholm.

NMR, along with X-ray crystallography, is commonly used to determine the structure of proteins and other molecules. NMR probes normally consist of a coil that surrounds the sample being studied. The coil creates a magnetic field that interacts with the nuclear spin of atoms in the sample, and those interactions reveal how the atoms are connected.

With current NMR machines, you need about 1017 (more than a million billion) molecules of a protein to determine its molecular structure. Some researchers have tried to make tiny coils to study smaller samples, but it has proven very difficult to scale these to small sizes to analyze tiny samples and to create high throughput methods.

Instead, research originally aimed at improving quantum computing led the MIT researchers to a completely different approach based on guiding waves.

"We were trying to get away from coils and see if we could find a new way to look at it," said Maguire, now a visiting researcher at MIT and chief technology officer of Cambridge-based ThingMagic.

The new approach starts with technology similar to the Wi-Fi antennas found in laptop computers. These antennas consist of a flat strip of metal. Using a laser, the MIT team made a microscopic defect (a slot) in such a conducting structure, known as a strip line. In that location a little bit of the magnetic field leaks out of the line, creating a uniform, concentrated magnetic field. That field allows the slot to be used as an NMR probe, in place of a coil.

The detector described in the PNAS paper is a plastic card about one-third the size of a credit card and is easy and inexpensive to produce. To get structural information, the new detector must still be placed in a massive machine housing a superconducting magnet, just as the coil probes are. However, the MIT researchers anticipate that the microslot's small sample volume will allow much smaller tabletop spectrometers to be developed.

Zhang said such NMR devices could prove especially valuable in diagnosing diseases caused by misfolded proteins, such as Alzheimer's and Huntington's, or prion diseases like Creutzfeld-Jakob disease. It could also allow early detection of glaucoma and cataracts, which could be diagnosed by testing a single teardrop. "You could detect it so early it will become treatable," Zhang said.

The new technology could dramatically improve the rate of biomedical research, because it can take up to a year to obtain enough material for an NMR study using the coil probes, said co-author Professor Neil Gershenfeld, director of MIT's Center for Bits and Atoms. That is "a major limiting step in drug discovery and studying biological pathways," he said.

The probes could also be used to make portable devices for diagnostics or soil analysis. And because the smaller devices are cheaper to make, they should be affordable even in developing countries where NMR machines are now rare, said Zhang.

Maguire got the idea for the project after talking to Zhang and asking him what kind of new device would make the biggest impact in biology. For Zhang, the answer was immediate: improving NMR.

Elucidating structure is critically important for biologists because structure determines function, said Zhang. The goal for the project was to create an NMR detector sensitive enough to detect structural information using the amount of protein in a spot on a two-dimensional gel used for electrophoresis (about 1014 molecules).

The task was daunting. "Nobody in their right mind would try to take one spot from that gel and get a molecular structure from it," said Zhang.

However, Zhang said that he believes in the sentiment expressed by Francis Crick, the legendary biologist who determined the double helix structure of DNA along with James Watson: You need to ask big questions in order to get big answers.

Zhang adds that the project probably never would have happened without interdisciplinary collaboration: "Biologists would never have thought of this type of machine, but a physicist would never have asked the question," he said.

Before starting this project, Maguire and Gershenfeld, with co-author Isaac Chuang, had already used NMR to create early quantum computers. Their effort to improve the computing capabilities turned out to be surprisingly relevant to detecting molecular structures, an "unexpected spinoff," said Gershenfeld.

"We were not at all thinking about biology, but this turned out to be exactly what was needed to improve biological sensitivity," Gershenfeld said.