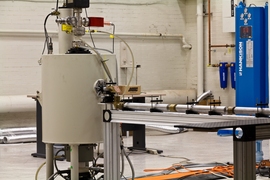 ↓ Download Image
Caption: MIT researchers used this gyrotron to generate the microwaves used to transfer polarization from unpaired electrons to protons. This allowed them to increase the sensitivity of nuclear magnetic resonance enough to study protein structures in their natural environment.
Credits: Photo: Ta-Chung Ong

Caption:
MIT researchers used this gyrotron to generate the microwaves used to transfer polarization from unpaired electrons to protons. This allowed them to increase the sensitivity of nuclear magnetic resonance enough to study protein structures in their natural environment.

Proteins can fold in different ways depending on their environment. These different configurations change the function of the protein; misfolding is frequently associated with diseases such as Alzheimer’s and Parkinson’s.

Until now, it has been difficult to fully characterize the different structures that proteins can take on in their natural environments. However, using a new technique known as sensitivity-enhanced nuclear magnetic resonance (NMR), MIT researchers have shown that they can analyze the structure that a yeast protein forms as it interacts with other proteins in a cell.

Using this type of NMR, which is based on a technique known as dynamic nuclear polarization (DNP), scientists can gain much more insight into protein structure and function than is possible with current NMR technology, which requires large quantities of purified proteins, isolated from their usual environment.

“Dynamic nuclear polarization has a capacity to transform our understanding of biological structures in their native contexts,” says Susan Lindquist, a professor of biology at MIT, member of the Whitehead Institute, and one of the senior authors of the paper, which appears in the Oct. 8 issue of Cell.

Robert Griffin, an MIT professor of chemistry and director of the Francis Bitter Magnet Laboratory, is also a senior author of the paper. Kendra Frederick, a former Whitehead postdoc who is now an assistant professor at the University of Texas Southwestern, is the paper’s lead author.

Traditional NMR uses the magnetic properties of atomic nuclei to reveal the structures of the molecules containing those nuclei. By using a strong magnetic field that interacts with the nuclear spins of carbon atoms in the proteins, NMR measures a trait known as chemical shift for some of the individual atoms in the sample, which can reveal how those atoms are connected.

“You look at changes in chemical shift and that tells you, for example, if there is an alpha helix or a beta sheet, which are two different conformations that a protein backbone often takes,” Frederick says.

However, traditional NMR is not very sensitive, because it only allows you to obtain information from the carbon-13 nuclei in a sample, which occur at 0.1 percent natural abundance.

For the past 20 years, Griffin’s lab has been developing dynamic nuclear polarization, which requires transferring polarization from unpaired electrons to protons and then carbon nuclei, using microwaves generated by a gyrotron, a high-frequency microwave oscillator developed in collaboration with Richard Temkin of MIT’s Department of Physics and Plasma Science and Fusion Center. In addition, Tim Swager and his group in the MIT Department of Chemistry have developed paramagnetic polarizing agents for the experiments. This allows researchers to boost signal intensities in carbon-13 NMR spectra by factors of 100 to 400, a very significant increase in sensitivity.

With traditional solid-state NMR, about 30 milligrams of purified protein are needed to get information within a reasonable amount of time. But with the boost in sensitivity from DNP, the protein no longer needs to be purified, and it can be analyzed in quantities that would normally be found inside a cell.

“It’s opening up a completely new set of problems that we can access,” Frederick says. “Using the sensitivity enhancement technique allows you to look at the protein at the correct levels, which is really important when you’re thinking about its biology.”

To make sure they are getting data only on the protein of interest, the researchers label their target protein with carbon-13 — a stable isotope of carbon — while the rest of the proteins are unlabeled.

“This technique has the potential to really open up a wide range of studies, under physiological conditions, that no one has been able to do before,” says Tim Cross, director of the NMR program at the National High Magnetic Field Laboratory and a professor at Florida State University.

“You don’t have to crystallize the proteins, you don’t have to put them into a uniform solution. You can study them in their natural environment, and that’s tremendously exciting,” says Cross, who was not part of the research team.

In the Cell paper, the researchers analyzed a yeast protein called Sup35, which Lindquist’s lab has been studying for many years. Sup35 is a prion — a type of protein that can form tangled clumps known as amyloids. Its usual function is to help cells terminate protein translation, but when it takes on an amyloid structure, it stops performing that function.

These are both normal states for the yeast protein, but when human proteins form amyloids they are usually associated with diseases — especially neurodegenerative diseases such as Alzheimer’s, Parkinson’s, and Huntington’s, as well as rheumatoid arthritis.

In previous studies using traditional NMR with purified Sup35 protein, scientists have found that a large section of the protein, which forms the amyloid, has a beta-sheet structure, which resembles the folds of an accordion. Another large section is intrinsically disordered and tends to flop around instead of forming a consistent structure.

However, in the new study, when the researchers looked at Sup35 surrounded by other cellular proteins, they found that the intrinsically disordered region actually does take on a regular structure, which they believe to be beta sheets. However, more powerful resolution is needed to tell for sure, Frederick says.

Frederick plans to continue using this NMR technique to study other yeast proteins, as well as human amyloid proteins. In particular, she wants to study why proteins can take on different conformations in different types of cells, or cells from people with different genetic backgrounds.