There’s something in the air 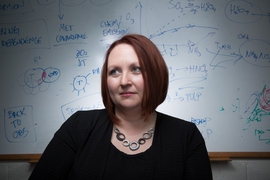 ↓ Download Image
Caption: Colette Heald describes her current work as “trying to understand the sources, transformation, and impact of gases and particles in the atmosphere, which is very dynamic with a lot of chemical compounds that interact.”
Credits: Photo: Bryce Vickmark 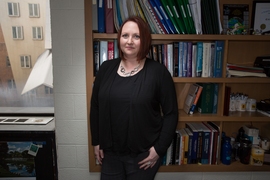 ↓ Download Image
Caption: Colette Heald describes her current work as “trying to understand the sources, transformation, and impact of gases and particles in the atmosphere, which is very dynamic with a lot of chemical compounds that interact.” 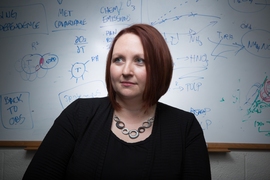 ↓ Download Image
Caption: Colette Heald describes her current work as “trying to understand the sources, transformation, and impact of gases and particles in the atmosphere, which is very dynamic with a lot of chemical compounds that interact.”
Credits: Photo: Bryce Vickmark

Caption:
Colette Heald describes her current work as “trying to understand the sources, transformation, and impact of gases and particles in the atmosphere, which is very dynamic with a lot of chemical compounds that interact.”
Credits:
Photo: Bryce Vickmark

Winds that blow across the Sahara desert in North Africa pick up particles of soil and sand, and typically carry them westward. Many of these grains travel across the Atlantic, leading to poor-visibility days in the southern U.S. and Caribbean, transporting nutrients to far-flung ecosystems in South America, and impacting hurricane formation in the Atlantic.

That’s just one example of the myriad ways that the behavior of tiny particles blown by the wind can have large-scale local, regional, and even global effects on the complex systems that govern Earth’s atmosphere. For Colette Heald, trying to unravel the intricate patterns of the atmosphere’s composition and chemistry, and the way these affect ecosystems, air quality, and even the climate itself, has been the driving force of her career.

Heald, who earned tenure at MIT last year, is the Mitsui Career Development Associate Professor in the Department of Civil and Environmental Engineering and also holds an appointment in the Department of Earth, Atmospheric and Planetary Sciences. Originally from Canada, she was born in Montreal and grew up in Ottawa, where her father was a paper industry executive and her mother a nurse. An older sister, who still lives in Canada, is an aerospace engineer.

Heald earned her BS in engineering physics at Queen’s University in Kingston, Ontario, and while there started doing summer research projects with faculty members at the University of Toronto. That’s when she got introduced to the field of atmospheric science. “I was so excited,” she says, to discover the deep connections between the kind of technical engineering research she had studied and the global environment. That led her to pursue a doctorate in atmospheric chemistry at Harvard University.

Coming from all directions

“That seemed like a flip from physics,” she recalls, “and I was concerned that I didn’t have the chemistry background for it.” But she soon discovered that the field “is so interdisciplinary; people come from a variety of directions” and bring different perspectives to the research.

She immediately became fascinated by the use of satellite data to study the atmosphere and its interactions. The timing was good: The first satellites measuring atmospheric pollution had been launched just a few years earlier.

One of the things measured by satellites was the concentration of carbon monoxide in the air. That compound “is produced from all kinds of combustion processes, and it’s a nice indicator because it stays in the atmosphere for about a month,” she says, “so we can use it to investigate the transport of plumes from sources to continents down-wind.”

Heald describes her current work as “trying to understand the sources, transformation, and impact of gases and particles in the atmosphere, which is very dynamic with a lot of chemical compounds that interact.” In a sense, she says, her focus is on figuring out what’s missing — where the holes are in models of the atmosphere, and how to fill those gaps. “I take an endpoint perspective,” she says. “I integrate the knowledge we have, and look for new ways to analyze the data to see what’s missing in our models.”

The effects are often subtle and hard to tease out from the chaotic mix of atmospheric processes. For example, in summer months the plumes of dust that constantly waft away from the Sahara desert end up in the North Atlantic and can make landfall in the United States and contribute to poor air quality in Florida. In the winter months winds blow the dust, which bears a complex load of assorted minerals, across to South America.

One of those minerals is phosphorus, which happens to be a key limiting element for the growth of plants in the Amazon basin — so those African breezes are actually contributing to the Amazon’s fertility. That’s the kind of complex interaction, she explains, that would never be derived solely from theoretical modeling or experimental observation but requires the integration of different disciplines and approaches. “That gives you a sense of the challenge,” she says.

“There needs to be a strong coupling between observational work and modeling,” Heald says, “and these are models that take decades of development and a large community of scientists.” Much of her research focuses on aerosols, particles of matter so small that they virtually defy gravity and can stay aloft for weeks. Another major area of her research is the complex interaction between the atmosphere and the biosphere.

One thing that makes the modeling difficult is that many of the important processes in atmospheric chemistry involve transport across ocean basins, and “there are not a lot of observations available” over vast stretches of ocean. For example, for dust “we have long-term records in Barbados and in Florida, but we have to connect the dots” to extrapolate to the missing areas. Satellite data are helping to fill in the blanks, but careful calibration is required to make sure these measurements dovetail with the ground-based records.

Heald’s modeling work has showed, for example, that in recent decades winds have been slowing over Africa, and that could reduce the flow of those aerosols to the Americas. Since those particles have an overall cooling effect, by radiating back incoming sunlight, their reduction leads to an overall warming, she explains.

Heald says she has always been interested in many different subjects and had a hard time initially in college deciding what she wanted to major in, even considering art history. “My sister told me, you’ll always be able to experience art and literature, but it’s hard to pursue science and engineering as a hobby!”

While acknowledging that many women have experienced discrimination in their scientific education and careers, “I feel very fortunate,” Heald says, about the support and encouragement she received throughout her education and early career. “I was never discouraged, always only encouraged. I never felt that any doors were closed to me.”

The community of atmospheric chemists, she says, “is very collegial, and I’m grateful for the smooth path I’ve had and the friendly collaborations I’ve developed along the way. I know not all fields are like that, so when I have a chance to help or give back, I try to get involved.”

What’s in your air?