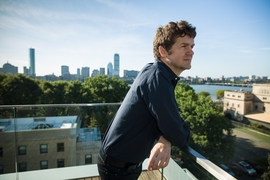 ↓ Download Image
Caption: “Design is one of many forces that can contribute to improving society. As a physical piece of most people’s lives, it is very important,” says Brent Ryan, an associate professor in MIT’s Department of Urban Studies and Planning.

Caption:
“Design is one of many forces that can contribute to improving society. As a physical piece of most people’s lives, it is very important,” says Brent Ryan, an associate professor in MIT’s Department of Urban Studies and Planning.
Credits:
Photo: Casey Atkins

Most of us have looked at an ugly building and thought: I could do better than that. Brent Ryan turned that idea into a career.

Ryan, an associate professor in MIT’s Department of Urban Studies and Planning, is a trained architect and outspoken advocate for the role of good design in city life. Indeed, his work is at the interchange of architecture and planning. Good architectural design, in Ryan’s view, is not only a matter of aesthetics but also linked to good ideas about planning.

“Design is one of many forces that can contribute to improving society,” Ryan says. “As a physical piece of most people’s lives, it is very important.”

Ryan’s sense that he could make contributions in this area dates back to his high school and college days in Connecticut, when he had a taste for exploring cities with a camera in hand, taking photographs of cityscapes. One day above all stands out in his memory: Near the city of New Haven, Ryan recalls, he encountered a series of 19th-century row houses, marred by an eyesore of a 1980s house that had been tacked on to the end.

“That one’s terrible,” Ryan remembers thinking. “I could do much better.”

That one experience didn’t send Ryan headlong into a design career — he was a biology major at Yale University who later recommitted to design — but it did reinforce a very specific idea that has animated his work: In cities, particularly those struggling with postindustrial renewal, design matters greatly.

“The architect alone can’t solve social problems,” Ryan says. “But the architect can be a meaningful contributor to solving them.”

Growing up in Connecticut, Ryan long had an interest in the built environment, even before it occurred to him that he could study and teach about it for a living.

“I was always interested in the world at large,” he reflects. “I was particularly interested in the visual qualities of urban neighborhoods, places where I thought there were shortcomings, where buildings had been torn down or they had built a highway.”

Even while majoring in biology at Yale, Ryan began realizing he was more drawn to architecture and design.

“I loved the creativity,” Ryan says. “Architecture is a totally open, creative field.” In architecture studio class, he notes, professors say, “Here is a site. Tell us what you think should happen.”

Ryan also found himself enjoying the method of learning in architecture, in contrast to his massive biology classes.

“In architecture, I was one of 12 students working with the professor. I felt I was really getting an engagement with the faculty. I still see that as being true at MIT. Our undergraduate architecture and planning programs are a great opportunity for students to engage with faculty.”

After graduating from college, Ryan decided to pursue design in earnest, receiving a master’s in architecture from Columbia University — where, he notes, being in New York City helped reinforce to him the importance of design in urban life.

“That’s how I combined my interest in creative design with the reality of the city as a place inhabited by millions of people,” Ryan says.

He then moved to MIT, where he received his PhD in urban design and planning in 2002. Ryan taught at the University of Illinois at Chicago from 2002 through 2007, before joining Harvard University for two years. He joined the MIT faculty in 2009 and received tenure earlier this year.

Ryan’s best-known research is his 2012 book, “Design After Decline,” a call for new modes of urban planning in cities that are trying to bounce back after major episodes of de-industrialization. The impetus for the book came from his experiences analyzing Detroit but the work looks closely at Philadelphia and other locales as well.

Ryan’s thesis is that de-industrialization occurred while people were becoming disenchanted with the massive, modernist-based program in urban planning, which had resulted in notorious housing projects such as the Pruitt-Igoe buildings in St. Louis, or Chicago’s high-rise low-income housing. In responding against high modernism, however, planners moved too far in the direction of suburban taste and scale, Ryan contends, producing ill-fitting efforts that left nonaffluent urban residents stranded within their own cities.

In contrast to both these trends, Ryan advocates a program of “palliative planning.” While designers cannot reverse economic decline, in the form of jobs being sent away over recent decades, they can still rebuild struggling cities around core urban ideas of density and mobility.

“Let’s not pretend we can reverse years of history, but neither should we punt on trying to make the city a better place,” Ryan says, reflecting on his book. “I would still recommend the same things. I still think we have a way to go.”

He is further extending these ideas in a forthcoming book, “Plural Urbanism” — to be published by the MIT Press in 2017 — which looks at ways of relating design to the economic and social structures of cities around the globe. Ryan calls the next book “a measured manifesto that calls for urban design to be seen in the context of society. … These principles are universal to the design of all cities.”

What Ryan preaches in his books, he practices as an instructor, too. Since joining the MIT faculty, he has taught urban-planning studio classes on “shrinking cities,” closely examining design challenges in de-industrializing areas, including Buffalo, Baltimore, East St. Louis, and most recently, urban spaces in Mexico.

Ryan credits MIT for its “characteristic latitude” in letting him range far and wide as a teacher, and he lets students know both the value and natural limits of planning. It is impossible to know all the needs of cities decades from now, but it is possible to improve cities in the present.

“We remind our students that the planner and the designer are always acting with incomplete information,” he notes.

So while Ryan does want designers and planners to think big, he also wants them to put their plans at the right scale — not to be utopian, perhaps, but “semitopian,” as he quips.

“Maybe I’m a semitopian,” Ryan says. “In design we tend to reward extremely utopian proposals, and there’s a place for those. The 20th century was full of utopian proposals, for good and ill. I’d like to see proposals that incorporate the reality of the world and yet set it on a course to a better future.”

A design to save American cities