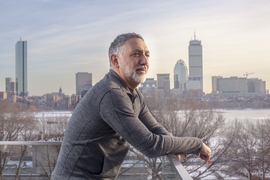 ↓ Download Image
Caption: “I have wanted to become an architect since the age of three,” says Hashim Sarkis, dean of MIT’s School of Architecture + Planning.
Credits: Photo: Sham Sthankiya

Caption:
“I have wanted to become an architect since the age of three,” says Hashim Sarkis, dean of MIT’s School of Architecture + Planning.
Credits:
Photo: Sham Sthankiya

Caption:
Detail of the Byblos Town Hall and Alphabet Museum.

The town of Byblos, in Lebanon, is several thousand years old. Indeed, it may be the oldest continuously inhabited place in the world. But now this ancient settlement is the site of a sleek new modernist town hall: three angular cubes linked by a glass-encased ground floor, set in a park. In a fitting match of architect and project, the building’s designer is Hashim Sarkis, dean of MIT’s School of Architecture and Planning (SA+P).

After all, Sarkis is a historically minded modernist who has spent years examining the architecture of civic institutions — town halls, schools, and other public buildings. He studied political philosophy while getting his PhD in architecture at Harvard University. A native of Lebanon and a long-time U.S. resident, Sarkis has global interests as a scholar and practitioner.

And as Sarkis is happy to explain, there are civic principles at work in the Byblos building.

That description also illuminates a key belief Sarkis holds: Architecture and urban design do not just reflect social values but help form them.

“We contribute to the making of society rather than simply representing it,” says Sarkis, who was recently named by the journal DesignIntelligence as one of its 25 Most Admired Educators for 2016.

Sitting in his airy MIT office, Sarkis, who became dean of SA+P in January 2015, cannot remember a time when he was not hoping to be an architect.

“I have wanted to become an architect since the age of three,” he says. Growing up in Beirut in the 1960s, he lived in a distinctive modernist home designed by the Polish architect Karol Schayer, the Lebanese architect Wassek Adib, and his father, Yousif Sarkis.

“It’s a small, small house,” Sarkis says. “But it had … modernist optimism. I must have been fascinated by how much people were fascinated by it. And whenever I was asked, ‘What do you want to do?’ I said, ‘I want to be an architect.’”

Beirut was then a glamorous world city — the “Paris of the Middle East,” as the saying had it — and a cultural crossroads between east and west, with co-existing Muslim and Christian communities and increasing tourism. That changed with the onset of Lebanese civil war, which lasted from 1975 until 1990 and made Beirut synonymous with destruction and strife.

Sarkis left home to study at the Rhode Island School of Design, earning a BA in architecture and in fine arts in 1987. Then he stayed in the U.S., receiving his MA in architecture from Harvard in 1989 and his PhD in 1995.

“In a way I became an academic because of the war,” Sarkis says. “The war kept going on. I couldn’t go back.”

In an unusual twist, Sarkis’ PhD studies in architecture included a minor field in political philosophy, as he studied with the likes of philosophers John Rawls and Hilary Putnam, and legal theorist Roberto Mangabeira Unger.

“I truly feel that we cannot tell what a democracy is until we understand the social spaces in which people of a democracy gather, interact, and meet,” Sarkis says.

Sarkis even connects the transparency of the Byblos town hall plan to the notions of idealized justice developed by Rawls, who contended that we must envision what a just society looks like even if it does not yet exist.

“It is important for a society to appear just, to express its aspirations in some form of institutional and spatial image,” Sarkis says of the building. Still, Sarkis demurs, he is not equating his own work with that of the famous philosopher: “I would hate to say that I’m trying to bring Rawls to life. He’s a giant.”

Sarkis has long worked in Lebanon; his initial work there, designed in 1998 and completed in 2008, was a set of apartments for fishermen in the town of Tyre.

“My first official payment was in fish,” Sarkis recalls. “The fishermen of Tyre took me out to their restaurant.” However, he adds wryly, “How can I put it — you cannot run a practice paying your employees fish.”

The Tyre apartment building has since gained international plaudits. The “Phaidon Atlas of 21st Century World Architecture” named it as one of the most significant buildings of the 21st century; the Boston Society of Architects gave it their Design Award in 2008; and in 2010 the Museum of Modern Art in New York selected it as one of 11 designs featured in an architectural exhibition, “Small Projects, Big Change.”

As a practitioner, Sarkis has developed designs across a broad range of projects, including government structures, several kinds of schools, and libraries. Beyond Tyre, Sarkis has also designed multiple forms of housing, from the United Arab Emirates to the U.S.

In the latter category, Sarkis produces modernist home designs that may themselves inspire fascination among visitors. Two of his current projects under construction in Lebanon —  apartments in the Yarzeh Hills of Beirut, and the Courtowers, houses on the Aamchit coast of Lebanon — find innovative ways of embedding homes into sloping ground while still bringing in copious amounts of light.

Currently Hashim Sarkis Studios employs 12 people and has also finished several projects in Massachusetts. These include apartments in Boston, a private house renovation in Cambridge, and the interior of Boston a health clinic. He also redesigned Oleana, the Eastern Mediterranean-influenced restaurant annually rated as Cambridge’s best, about which Boston magazine has written that Sarkis’ back patio and glassed-in porch are “as enchanting as the food.”

Having maintained a flourishing academic career in addition to his architecture practice, Sarkis was a professor at Harvard’s Graduate School of Design from 1998 until January 2015. His published work includes a 2003 book about the post-war Greek architect and designer Constantinos Doxiadis, and he has co-edited a book of essays on the Catalan architect Josep Lluis Sert.

Sarkis has three ongoing research projects. One is a book, “Beirut Normal,” which contends that Beirut’s form and architecture owes more to the standard practices of design than to its infamous strife.

“It’s based on the idea that we can describe Beirut without talking about war and peace,” Sarkis says. “If you look at the city it follows very normal practices of urban [development] … through many of these cataclysmic moments.”

Another project looks at the evolving form of the contemporary metropolis, contending that the traditional notion of a central city and peripheral suburbs should be altered. “We no longer go from a center to an edge” in cities, says Sarkis, especially along coasts, which “produce a very different set of hierarchies than the city and suburbs.”

Finally, Sarkis is writing a book about how the post-war architecture of U.S. schools meshed with American civic ideals and changes in education.

“In America, more than anywhere else, the image of a locality is focused on the school,” says Sarkis, who after surveying the U.S. has narrowed the book’s focus to a case study in Norman, Oklahoma.

Although Sarkis was happy at Harvard, he jumped at the chance to become dean of SA+P.

“Harvard is an excellent school,” Sarkis says. Still, he adds, “It was a quick decision. I tend to make the more important decisions very quickly.”

One attraction of MIT was the opportunity to lead faculty and students whose focus on research mirrors his own.

“The MIT model itself has become really a desirable model for many professional schools in architecture and planning elsewhere,” Sarkis says. “Our students and faculty are coveted everywhere, because they do bring with them this intense research approach.”

As dean, Sarkis expects that research focus will often be applied “to solve complex social problems. Health, environment, innovation, all of these converge on cities. We’re dealing with these not just as discrete phenomena but how they come together.”

Or, to summarize his view about the importance of architecture, planning, and design another way, Sarkis cites the American pragmatist philosopher John Dewey.

“Dewey’s argument about democracy was that there’s no single source from which all the answers about how we live can come,” Sarkis says. “As such, architecture is one source, and it plays a very, very important role.”

Metropolis selected Boston as one of the best design cities in the world, highlighting MIT's School of Architecture and Planning and the Fab Lab as key drivers of the city’s success. “Here in Boston our biotech and high-tech industries are offering designers incredible opportunities to express their creativity,” says Hashim Sarkis, dean of SA+P. “It’s a place where design is being pushed to new frontiers.”

Hashim Sarkis named dean of the School of Architecture and Planning