Hashim Sarkis named dean of the School of Architecture and Planning 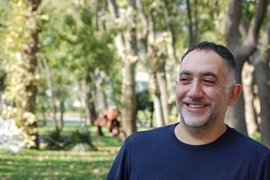 Hashim Sarkis — a prominent scholar of architecture and urbanism, a practicing architect whose works have been built in the United States and the Middle East, and a leading expert on design in the Middle East — has been named the new dean of MIT’s School of Architecture and Planning (SA+P), effective in January.

Sarkis is currently the Aga Khan Professor of Landscape Architecture and Urbanism in Muslim Societies at Harvard University’s Graduate School of Design (GSD). He has been on the Harvard faculty since 1998, and has been a full professor since 2002.

For the last dozen years, Sarkis has also served as director of the Aga Khan Program for Islamic Architecture at the GSD. The Aga Khan Program is located jointly at Harvard and MIT, and is a leading program for the study of architecture, urban issues, and visual culture in Islamic societies. He has taught courses and design studios in architecture and urban design that emphasize the importance of design in its cultural context across a broad range of geographic locations.

“As the longtime director of the Aga Khan Program at Harvard, Hashim Sarkis is well-known and widely admired in our School of Architecture and Planning community,” MIT President L. Rafael Reif says. “Through his collaborations at this end of Mass. Ave., he begins this new role with a strong sense of the culture, values, and aspirations of our School of Architecture and Planning and of MIT. In the best MIT tradition, he is a person of bold ideas who likes to test them in the real world of practice. I look forward to working with him to build upon the tremendous progress made by former dean Adele Naude Santos.”

“The energy and forward-looking attitude I have encountered at one of the oldest schools of architecture and planning in the country makes it feel like the youngest,” Sarkis says. “Educators of architects and planners worldwide are emulating the MIT research-based model, and it is a true honor to build on Adele’s legacy and to guide this model forward. MIT at large provides an ideal setting for such an undertaking, especially as it invests in the future of education and in initiatives like energy, environment, and innovation that are at the core of SA+P. It is especially invigorating to see the scientists and engineers reach out to the designers and to see how much they value their contribution to the One Community.”

As a scholar and designer, Sarkis has moved across boundaries and disciplines: He has published works on architecture and urbanism in Lebanon, in addition to writing about leading 20th-century modernist architects. His architectural practice, Hashim Sarkis Studios, has won numerous competitions and designed now-completed civic and commercial projects, as well as private houses, from Massachusetts to Lebanon and the United Arab Emirates.

Sarkis’ publications include “Circa 1958: Lebanon in the Pictures and Plans of Constantinos Doxiadis” (2003). He has edited or co-edited volumes about several leaders of modernism, including “CASE: Le Corbusier’s Venice Hospital” (2001) and “Josep Lluis Sert: The Architect of Urban Design” (2008). Sarkis also co-edited “Projecting Beirut” (1998), about the modern development and more recent reconstruction of Beirut.

Completed or under-construction buildings designed by Hashim Sarkis Studios include the new town hall of Byblos, Lebanon; a housing project in Tyre, Lebanon; a park in downtown Beirut; urban design guidelines for several Middle Eastern cities; and a variety of residential and commercial buildings in the metropolitan Boston area.

Sarkis’ architectural work has been published extensively and has been displayed at the Museum of Modern Art in New York, as well as at Biennale exhibitions in Venice, Rotterdam, and Shenzhen/Hong Kong.

As SA+P’s new permanent dean, Sarkis succeeds Santos, who served from 2004 until this year, announcing in January that she would step down. Santos remains on the faculty as a professor of architecture, and is also a practicing architect.

Architectural historian, critic, and theorist Mark Jarzombek, a professor of the history and theory of architecture, has served as SA+P’s interim dean since July 1. Sarkis will become the 10th permanent dean of the school.

SA+P encompasses five departments, programs, and centers: the Department of Architecture, the Department of Urban Studies and Planning, the MIT Media Lab, the Center for Real Estate, and the Program in Art, Culture, and Technology.

Some 40 percent of the current SA+P faculty has been hired within the past decade; during the same time, graduate applications to many programs have soared. The school has also consolidated and renewed the physical spaces in which its scholars and practitioners work, in part to encourage cross-disciplinary collaboration.

Hashim Sarkis, dean of the MIT School of Architecture and Planning, speaks on Boston Public Radio about Boston architecture and the future of urban planning. “Architects have proven time and time again the power of architecture in helping us imagine the future,” says Sarkis.

S. I. Rosenbaum of Boston Magazine speaks with the new dean of MIT’s School of Architecture and Planning, Hashim Sarkis, about his desire to create a new vocabulary to describe existing habitats. “It is time to come up with a richer lexicon,” says Sarkis.

In a piece for The Huffington Post, Heidi Legg interviews Prof. Hashim Sarkis, the newly appointed dean of MIT’s School of Architecture and Planning, about his vision of the world as one city. “The city as an entity has become difficult to understand or explain because it's everywhere and nowhere,” explains Sarkis.

Adèle Naudé Santos, dean of the School of Architecture and Planning, to step down