Education leaders gather to chart a future for sustainability at universities 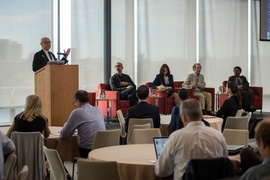 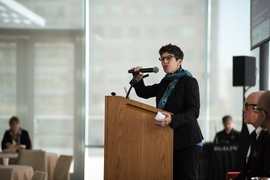 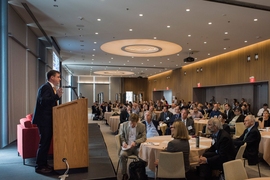 Educators and administrators from 33 nations gathered at MIT last week for the third World Symposium on Sustainable Development at Universities, where they discussed successful programs already adopted at their institutions, and plans for improving and expanding education about sustainability over the coming years.

The first symposium was held in Rio de Janeiro in 2012, in conjunction with the U.N. Conference on Sustainable Development. A second symposium was held in Manchester, U.K., in 2014. This year’s symposium at MIT featured 175 participants, from six continents, most of whom presented research papers or participated in panel discussions at the three-day meeting.

The meeting was co-sponsored by MIT’s Office of Sustainability, which was formed three years ago. Julie Newman, director of that office, said her mission, and that of the symposium, was “to generate new and proven ways of responding” to the unprecedented challenges presented by global climate change, “to inspire countries to develop breakthrough solutions, and to connect people, ideas, and systems” to help address those challenges.

Representatives from many universities described their efforts to create educational programs, courses, and research projects to increase their students’ awareness of the many dimensions of sustainability, including technical, social, economic, political, and educational aspects. They also discussed the process of transforming their own campuses into “living laboratories” to help develop more efficient systems that could persist without depleting resources or exploiting resources or peoples.

Nicholas Ashford, a professor of technology and policy at MIT, said in an introductory panel discussion that “we are actually in the midst of a sustainability crisis.” He cited not only the rapid pace of global climate change but also “unprecedented rates of income and wealth inequality.” But, he said, this is not a problem that requires new technological solutions: “It’s not an innovation deficit, it’s a diffusion deficit. We have the technologies to solve the energy crisis right now,” if only political, economic, and social factors would enable their deployment.

Chris Shiel, a professor of life and environmental science at Bournemouth University in the U.K., said that awareness of the need for sustainable solutions at universities has been growing rapidly around the world, but there is also a need for careful evaluation of proposed solutions, some of which amount to mere “window dressing.” In particular, approaches that ignore the economics of a situation, or that are distorted by the wrong kind of incentives, can produce inadequate or even counterproductive results. “Some policies are not worth the paper they’re written on,” she said, adding that sometimes it’s better to just get on with doing useful work at a grass-roots level rather than battling with resistant administrators over planned curricula. “I’d rather be doing good work that makes a difference, than trying to change the minds of senior staff.”

While some participants who teach college courses on sustainability, or run university programs centered on that goal, said they had faced some initial resistance from administration and other faculty members, many of them found that such resistance faded once they were able to demonstrate concrete results as well as enthusiastic responses and useful research carried out by students.

At MIT, the administration’s firm commitment to research and teaching about sustainability was emphasized by Israel Ruiz, executive vice president and treasurer, who described the Institute’s efforts to work with local governments and industries to strengthen its impact on achieving sustainability goals.

Wu Jiang, a professor at Tongji University in Shanghai and co-chair of the Global Universities Partnership on Environment and Sustainability, said that it is important for students and faculty in every discipline to incorporate the concept of sustainability into their curricula. Sustainability, he said, “is not a research field, but should be engaged in by all the people.” It should affect “how we should reform all of education, how we should change our philosophy, our sense of values.”

In multiple parallel panel sessions, educators and researchers presented examples of how sustainability has been taught and put into practice at many universities, as well as analyses of the many different approaches and variations in subject matter covered by courses in sustainability.

Leon Glicksman, a professor of building technology and mechanical engineering at MIT, presented several examples of projects carried out by MIT students that produced significant, tangible results. For example, he cited a project that analyzed the energy use of the chemistry building, which turned out to be the highest of any building on campus. A careful analysis showed that the obvious suspects — heating, lighting, and air conditioning — were actually only a small fraction of that building’s energy use. Rather, it was the fume hoods in the labs, which draw heated air from the room and vent it to the outside, that were the big energy users. A careful study showed that this wasted energy could be drastically cut without compromising safety, by simply making sure the hoods were closed when not in use, and by reducing the flow rate. “We reduced the energy use by a factor of two, just from the observations,” he said.

Other projects achieved savings related to unneeded lighting, simply by installing diffusers on existing skylights in order to distribute the light better and eliminate areas of glare. And even one of the most energy-efficient buildings on campus, where efficiency had been carefully incorporated into the design from the start, was found to have room for major improvement when students discovered that its automated system for closing and opening window shades had been designed to operate by time of day and season, rather than by actual lighting conditions. Adding light meters so the shades could respond quickly to cloudy conditions greatly reduced the lighting and heating loads. “MIT is a testbed,” Glicksman said.

John Fernandez, director of MIT’s Environmental Solutions Initiative, echoed others at the symposium in stressing the importance of addressing the inherently cross-disciplinary nature of sustainability issues. “These things are all linked,” he said. “Isolating climate change, in particular, without consideration to all these other issues,” including economic equity and a healthy environment, “runs the risk of us having a bankrupt set of solutions.”

Addressing these problems adequately, he said, “is as much about people as it is about the planet.” And it is crucial for people at the local level, in their own communities around the world, to play active parts in developing solutions. At MIT, he said, “We’re interested in doing the best we can, and then partnering” with others in their own localities. “They know what the local challenges are, and the best solutions.”