How the spleen filters blood 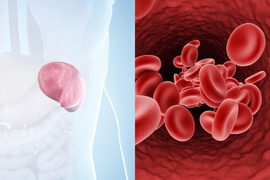 ↓ Download Image
Caption: Pictured on the left is a spleen; on the right are red blood cells. ““We have presented results showing that the spleen is the main organ that defines the shape of the circulating red blood cells” says Ming Dao, a principal research scientist in MIT’s Department of Materials Science and Engineering.

Caption:
Pictured on the left is a spleen; on the right are red blood cells. ““We have presented results showing that the spleen is the main organ that defines the shape of the circulating red blood cells” says Ming Dao, a principal research scientist in MIT’s Department of Materials Science and Engineering.
Credits:
Image: MIT News

Red blood cells must be small and flexible enough to squeeze through the tiniest capillaries of the body, where they deliver oxygen to surrounding cells. In the late 1960s, scientists proposed that the minute dimensions of these capillaries, which are less than 4 micrometers in diameter, are responsible for defining the size and shape of red blood cells.

However, a new study led by MIT researchers reveals that these blood cell traits are actually determined by the smallest opening in the spleen. This narrow passage, known as the interendothelial slit, imposes a more stringent “physical fitness test” that all blood cells must pass before continuing to circulate through the body.

“We have presented results showing that the spleen is the main organ that defines the shape of the circulating red blood cells,” says Ming Dao, a principal research scientist in MIT’s Department of Materials Science and Engineering.

The findings could help scientists to learn more about the spleen’s role in fighting diseases that affect the shape of red blood cells, including malaria, and to identify novel drug targets for such diseases.

Dao and Subra Suresh, president of Carnegie Mellon University and former dean of engineering at MIT, are the senior authors of the new study, which appears in the Proceedings of the National Academy of Sciences the week of June 27.

The spleen’s primary function is to remove old red blood cells from circulation when they can no longer perform their job. To explore how much of a role the spleen plays in determining the size and shape of red blood cells, the researchers developed a computer simulation to model how these cells squeeze through tiny slits formed by the spaces between the endothelial cells lining the spleen’s blood vessels. As blood flows through the spleen, about 10 percent of the red blood cells are diverted through these slits, which have maximum dimensions of 1.2 micrometers in height (about 1/80 the thickness of a human hair), 4 micrometers in width, and 1.9 micrometers in depth. This slit is more likely to stop old or spherical red blood cells, while a long circular tube such as a capillary may allow them to go through.

“The computational and analytical models from this work, along with a variety of experimental observations, point to a more detailed picture of how the physiology of human spleen likely influences several key geometrical characteristics of red blood cells,” says Suresh. “They also offer better understanding of how the circulatory bottleneck for the red blood cells in the spleen could affect a variety of acute and chronic disease states arising from hereditary disorders, human cancers, and infectious diseases, with implications for therapeutic interventions and drug efficacy assays.”

The researchers’ model, based on earlier dissipative particle dynamics models developed in the research group of George Karniadakis, a professor of applied mathematics at Brown University, allowed them to determine the possible sizes and mechanical properties of red blood cells that can fit through the slits, based on the size of the slits and the amount of pressure on the cells as they flow through the spleen.

Using this model, the researchers discovered a range of possible sizes and deformabilities that allow red blood cells to pass through the slits and continue on their way. These ranges closely match the ranges seen in healthy human red blood cells, which have surface areas ranging from 80 to 180 square micrometers and volumes ranging from 60 to 160 cubic micrometers.

“The results of this study have interesting consequences for the use of morphological features of circulating red blood cells as biomarkers for a range of blood diseases,” says Gerhard Gompper, a professor at the Institute of Solid State Physics in Julich, Germany, who was not involved in the research. “The study shows that blood-cell and blood-flow modeling and simulation have reached a stage where they can contribute significantly to the understanding and treatment of blood-related disorders.”

The results may validate a new approach to developing malaria drugs, Dao says. Drugs that affect the shape of malaria-infected blood cells could treat the disease by making it harder for the cells to get through the slits in the spleen. One such drug, known as spiroindoline KAE609, is now in clinical trials.

The findings also offer an explanation for why some patients treated with an artemisinin-based antimalarial drug often experience severe anemia. This type of drug makes red blood cells stiffer, making it easier for the spleen to filter them out. However, the drug affects both infected and healthy blood cells, leading to a more significant reduction in the overall number of circulating cells.

The research was funded by the National Institutes of Health, the Swiss Platform for Advanced Scientific Computing, the National Science Foundation, and the Department of Energy Collaboratory on Mathematics for Mesoscopic Modeling of Materials.