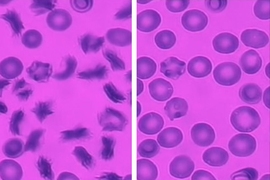 Caption:
As red blood cells from sickle cell patients flow through the new MIT microfluidic device, many of them become sickled following exposure to a low-oxygen environment (left). At right, when oxygen levels are restored, the cells resume their normal shape.
Credits:
Image: Ming Dao

Patients with sickle cell disease often suffer from painful attacks known as vaso-occlusive crises, during which their sickle-shaped blood cells get stuck in tiny capillaries, depriving tissues of needed oxygen. Blood transfusions can sometimes prevent such attacks, but there are currently no good ways to predict when a vaso-occlusive crisis, which can last for several days, is imminent.

“You don’t know exactly when it’s going to happen or how to reliably predict it is coming,” says Ming Dao, a principal research scientist in MIT’s Department of Materials Science and Engineering.

Now, Dao and colleagues, including Subra Suresh, president of Carnegie Mellon University, former dean of MIT’s School of Engineering, and Vannevar Bush Professor of Engineering Emeritus, have developed a tiny microfluidic device that can analyze the behavior of blood from sickle cell disease patients. This device can measure how long it takes blood cells to become dangerously stiff, making them more likely to get trapped in blood vessels.

Future versions of this device could be used to predict and prevent vaso-occlusive crises, says Dao, one of the senior authors of a paper describing the device in this week’s issue of the Proceedings of the National Academy of Sciences. It could also help researchers test the efficacy of new drugs for sickle cell disease, which occurs in about 300,000 newborns per year, more than 75 percent of them in Africa. The best drug now available, hydroxyurea, works for only about two-thirds of patients.

The research team also includes the paper’s lead author, E (Sarah) Du, a former MIT postdoc who is now an assistant professor at Florida Atlantic University; Monica Diez-Silva, a former research scientist in MIT’s Department of Materials Science and Engineering; and Gregory Kato of the Department of Medicine at the University of Pittsburgh.

People with sickle cell disease, an inherited genetic disorder, have a variant form of hemoglobin that causes their red blood cells to take on a characteristic sickle shape when in low-oxygen conditions. Patients now have an average life expectancy of 45 to 50 years in the United States, up from only 14 years as recently as 1973.

Disease severity varies among patients depending on how much abnormal hemoglobin is present in their cells. Sickle cells can squeeze through most blood vessels, but they can encounter problems when they enter very small capillaries (less than 20 micrometers in diameter, or about one-fourth the diameter of a human hair). As blood flows through these tiny capillaries, oxygen diffuses from the blood into the surrounding tissue, supplying them with the essential gas. This blood deoxygenation causes the hemoglobin in sickle cells to form long fibrous chains, making the cells stiffer and less able to squeeze through narrow capillaries.

However, there is currently no good way to model how this deoxygenation affects patients’ red blood cells, which do not all behave the same way, making it hard to predict the risk of a vaso-occlusive crisis, Dao says.

He and his colleagues designed their microfluidic device to mimic the conditions inside a blood vessel as oxygen leaves the blood. Cells flow through a narrow channel that wraps around a compartment containing oxygen. Oxygen diffuses from the gas compartment to the microfluidic channel, allowing researchers to control how much oxygen cells are exposed to.

Learn about a microfluidic device that can predict the behavior of sickle cells, and may lead to improved treatments for those with sickle cell disease.

Using this device to measure blood samples from 25 sickle cell disease patients, the researchers were able to determine how deoxygenation affects red blood cells’ sickling rates; their rate of getting stuck in capillaries; and how quickly they regain their usual shape when oxygen levels are restored. They also identified two patients whose cell sickling was much more severe than the others. They now plan to undertake more extensive studies of patient samples to demonstrate if the device can be used to reliably predict individual patients’ risk of a vaso-occlusive crisis.

“This technique represents a major advance to further our understanding and treatment of vaso-occlusion due to sickle cell disease. The microfluidic device and technique could also be potentially beneficial in studying and treating other diseases where the deformability of blood cells is affected,” says Guruswami Ravichandran, a professor of aeronautics and mechanical engineering at Caltech who was not involved in this study.

The researchers have filed a patent on the device to further its development for diagnostic use, and they also plan to pursue it as a tool to test potential new drugs for sickle cell disease.

To demonstrate the device’s usefulness for evaluating new drugs, the researchers analyzed a drug called Aes-103, now in phase II clinical trials to treat sickle cell disease, and found that it helped prevent patients’ cells from clogging in the microfluidic channel.

They also studied cells treated with hydroxyurea and found that the drug is more effective against red blood cells of higher density, which usually have more abnormal hemoglobin and are more likely to get stuck in capillaries.

The research was funded by the National Institutes of Health and Carnegie Mellon University.