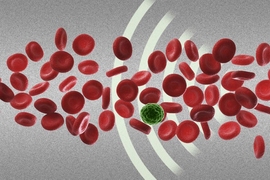 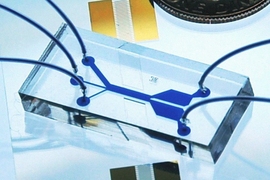 ↓ Download Image
Caption: This microfluidic device uses sound waves to sorts cells as they flow through the channel, from left to right.
Credits: Image: Courtesy of the researchers

Caption:
This microfluidic device uses sound waves to sorts cells as they flow through the channel, from left to right.
Credits:
Image courtesy of the researchers

Researchers from MIT, Pennsylvania State University, and Carnegie Mellon University have devised a new way to separate cells by exposing them to sound waves as they flow through a tiny channel. Their device, about the size of a dime, could be used to detect the extremely rare tumor cells that circulate in cancer patients’ blood, helping doctors predict whether a tumor is going to spread.

Separating cells with sound offers a gentler alternative to existing cell-sorting technologies, which require tagging the cells with chemicals or exposing them to stronger mechanical forces that may damage them.

“Acoustic pressure is very mild and much smaller in terms of forces and disturbance to the cell. This is a most gentle way to separate cells, and there’s no artificial labeling necessary,” says Ming Dao, a principal research scientist in MIT’s Department of Materials Science and Engineering and one of the senior authors of the paper, which appears this week in the Proceedings of the National Academy of Sciences.

Subra Suresh, president of Carnegie Mellon, the Vannevar Bush Professor of Engineering Emeritus, and a former dean of engineering at MIT, and Tony Jun Huang, a professor of engineering science and mechanics at Penn State, are also senior authors of the paper. Lead authors are MIT postdoc Xiaoyun Ding and Zhangli Peng, a former MIT postdoc who is now an assistant professor at the University of Notre Dame.

The researchers have filed for a patent on the device, the technology of which they have demonstrated can be used to separate rare circulating cancer cells from white blood cells.

To sort cells using sound waves, scientists have previously built microfluidic devices with two acoustic transducers, which produce sound waves on either side of a microchannel. When the two waves meet, they combine to form a standing wave (a wave that remains in constant position). This wave produces a pressure node, or line of low pressure, running parallel to the direction of cell flow. Cells that encounter this node are pushed to the side of the channel; the distance of cell movement depends on their size and other properties such as compressibility.

However, these existing devices are inefficient: Because there is only one pressure node, cells can be pushed aside only short distances.

The new device overcomes that obstacle by tilting the sound waves so they run across the microchannel at an angle — meaning that each cell encounters several pressure nodes as it flows through the channel. Each time it encounters a node, the pressure guides the cell a little further off center, making it easier to capture cells of different sizes by the time they reach the end of the channel.

This simple modification dramatically boosts the efficiency of such devices, says Taher Saif, a professor of mechanical science and engineering at the University of Illinois at Urbana-Champaign. “That is just enough to make cells of different sizes and properties separate from each other without causing any damage or harm to them,” says Saif, who was not involved in this work.

In this study, the researchers first tested the system with plastic beads, finding that it could separate beads with diameters of 9.9 and 7.3 microns (thousandths of a millimeter) with about 97 percent accuracy. They also devised a computer simulation that can predict a cell’s trajectory through the channel based on its size, density, and compressibility, as well as the angle of the sound waves, allowing them to customize the device to separate different types of cells.

To test whether the device could be useful for detecting circulating tumor cells, the researchers tried to separate breast cancer cells known as MCF-7 cells from white blood cells. These two cell types differ in size (20 microns in diameter for MCF-7 and 12 microns for white blood cells), as well as density and compressibility. The device successfully recovered about 71 percent of the cancer cells; the researchers plan to test it with blood samples from cancer patients to see how well it can detect circulating tumor cells in clinical settings. Such cells are very rare: A 1-milliliter sample of blood may contain only a few tumor cells.

“If you can detect these rare circulating tumor cells, it’s a good way to study cancer biology and diagnose whether the primary cancer has moved to a new site to generate metastatic tumors,” Dao says.  “This method is a step forward for detection of circulating tumor cells in the body. It has the potential to offer a safe and effective new tool for cancer researchers, clinicians and patients,” Suresh says.

On the hunt for rare cancer cells