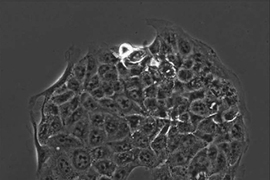 Caption:
A microscopic image of cancer cells adhering to a spot coated with molecules found in the extracellular matrix.
Credits:
Image: Nathan Reticker-Flynn
Although tumor metastasis causes about 90 percent of cancer deaths, the exact mechanism that allows cancer cells to spread from one part of the body to another is not well understood. One key question is how tumor cells detach from the structural elements that normally hold tissues in place, then reattach themselves in a new site.

A new study from MIT cancer researchers reveals some of the cellular adhesion molecules that are critical to this process. The findings, published Oct. 9 in Nature Communications, offer potential new cancer drug targets, says Sangeeta Bhatia, the John and Dorothy Wilson Professor of Health Sciences and Technology and Electrical Engineering and Computer Science, and leader of the research team.

“As cancer cells become more metastatic, there can be a loss of adhesion to normal tissue structures. Then, as they become more aggressive, they gain the ability to stick to, and grow on, molecules that are not normally found in healthy tissues but are found in sites of tumor metastases,” says Bhatia, who is also a member of the David H. Koch Institute for Integrative Cancer Research at MIT. “If we can prevent them from growing at these new sites, we may be able to interfere with metastatic disease.”

Lead author of the paper is Nathan Reticker-Flynn, a PhD student in Bhatia’s lab. Other authors are former students David Braga Malta and Mary Xu, postdocs Monte Winslow and John Lamar, and research scientist Gregory Underhill. In addition, Richard Hynes, the D.K. Ludwig Professor of Biology and a member of the Koch Institute, and Tyler Jacks, director of the Koch Institute, are contributing authors on this study.

Cells inside the human body are usually tethered to a structural support system known as the extracellular matrix, which also helps regulate cellular behavior. Proteins called integrins, located on cell surfaces, form the anchors that hold the cells in place. When cancer cells metastasize, these anchors let go.

Building on a system they first described in 2005, the scientists developed technology allowing them to expose each type of cell to about 800 different pairs of molecules found in the extracellular matrix. After depositing cells onto a microscope slide in tiny spots — each containing two different extracellular matrix proteins — the researchers could measure how well cells from each tumor type bound to the protein pairs.

The new technology is a huge step forward from current experimental methods for studying cellular adhesion, which are limited to much smaller numbers of cells and adhesion molecules, says Jan Pilch, an assistant professor at the University of Pittsburgh School of Medicine.

“They’ve not only scaled this up dramatically, they’re able to study the adhesion proteins in combination, which allows them to identify adhesion synergies,” says Pilch, who was not part of the research team.

The researchers were surprised to find that adhesion tendencies of metastatic cells from different primary tumors were much more similar to each other than to those of the primary tumor from which they originally came. One pair of extracellular matrix molecules that metastatic tumors stuck to especially well was fibronectin and galectin-3, both made of proteins that contain or bind to sugars.

Although metastatic tumor cells share adhesion traits, they may take different pathways to get there, Reticker-Flynn says. Some tumor cells alter the combination of integrins that they express, while others vary the types of sugars found on their surfaces. All of these changes can result in higher or lower affinities for certain molecules found in the extracellular matrix of different tissues.

In an analysis of human tumor samples, both primary and metastatic, the researchers saw similar patterns. Specifically, they found that the more aggressive the metastasis, the more galectin-3 was present.

Previous studies have suggested that tumors pave the way for metastasis by secreting molecules that promote the development of environments hospitable to new cancer growth. Accumulation of galectin-3 and other molecules that help tumor cells colonize new sites may be part of this process, the researchers say.

“There’s a lot of evidence to suggest that a hospitable niche for the tumor cells is being established prior to the cells even arriving and establishing a home there,” Reticker-Flynn says.

The findings offer potential new ways to block metastasis by focusing on a specific protein-protein or protein-sugar interaction, rather than a particular gene mutation, Reticker-Flynn says. “If those changes do confer a lot of metastatic potential, we can start thinking about how you target that interaction specifically,” he says.

The researchers tested this approach by genetically knocking down the amount of an integrin found on the surface of cancer cells, which they had identified as interacting with fibronectin and galectin-3. In those mice, tumor spread was reduced. Other possible therapeutic approaches include blocking binding sites on fibronectin and galectin-3 with antibodies, so tumor cells can’t latch onto them.

To help with efforts to develop such drugs, the research team is now trying to figure out the details of tumor cells’ interactions with galectin-3 and is developing new candidate therapeutics aimed at inhibiting those interactions.

The research was funded by Stand Up to Cancer, the Koch Institute Circulating Tumor Cell Project, the Harvard Stem Cell Institute, the National Cancer Institute, the Howard Hughes Medical Institute and the Ludwig Center at MIT.