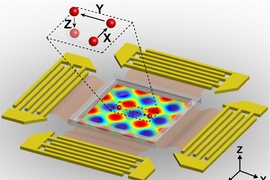 ↓ Download Image
Caption: An illustration of the surface acoustic wave generators, with the generated 3-D trapping nodes. The Inset indicates a single particle within a 3-D trapping node, which can be manipulated independently along x, y, or z axes.

Caption:
An illustration of the surface acoustic wave generators, with the generated 3-D trapping nodes. The inset indicates a single particle within a 3-D trapping node, which can be manipulated independently along x, y, or z axes.
Credits:
Courtesy of the researchers

Engineers at MIT, Penn State University, and Carnegie Mellon University have devised a way to manipulate cells in three dimensions using sound waves. These “acoustic tweezers” could make possible 3-D printing of cell structures for tissue engineering and other applications, the researchers say.

Designing tissue implants that can be used to treat human disease requires precisely recreating the natural tissue architecture, but so far it has proven difficult to develop a single method that can achieve that while keeping cells viable and functional.

“The results presented in this paper provide a unique pathway to manipulate biological cells accurately and in three dimensions, without the need for any invasive contact, tagging, or biochemical labeling,” says Subra Suresh, president of Carnegie Mellon and former dean of engineering at MIT. “This approach could lead to new possibilities for research and applications in such areas as regenerative medicine, neuroscience, tissue engineering, biomanufacturing, and cancer metastasis.”

Suresh, Ming Dao, a principal research scientist in MIT’s Department of Materials Science and Engineering, and Tony Jun Huang, a professor of engineering science and mechanics at Penn State, are senior authors of a paper describing the device, published the week of Jan. 25. in the Proceedings of the National Academy of Sciences.

The new acoustic tweezers are based on a microfluidic device that the researchers previously developed to manipulate cells in two dimensions. This device produces two acoustic standing waves, which are waves with a constant height. Where the two waves meet, they create a “pressure node” that can trap single cells. By altering the wavelength and another wave property known as the phase, the researchers can move the node and the cell trapped within it.

The research team previously used a similar approach to separate cancer cells from healthy cells, which could be useful for detecting rare tumor cells in a patient’s bloodstream and predicting whether the tumor will spread.

In the new study, the researchers added a third dimension of control: Once the cells are trapped in a horizontal plane, they can be moved up and down by altering the acoustic waves’ power, that is, the rate at which sound energy is emitted. Boosting the power allows the researchers to lift the cells from the surface in a type of “acoustic levitation,” then place them in a specific location, Dao says.

The researchers also developed equations that allow them to accurately predict how changes in the wavelength, phase, and acoustic power will affect cells’ positions.

“We now have a good idea of what to expect and how to control the 3-D positioning of the acoustic waves and the pressure nodes, enabling validation of the method as well as system optimization,” Dao says.

In this study, the researchers demonstrated their device on polystyrene particles as well as mouse fibroblast cells. They were able to move the cells, one at a time, into specific positions on a surface and create patterns. They could also stack cells on top of each other.

“This is an exceptionally innovative approach of manipulating particles and single cells in 3-D in fluids,” says Taher Saif, a professor of mechanical science and engineering at the University of Illinois at Urbana-Champaign, who was not part of the research team. “Since acoustic energy is used for this manipulation, the approach is noninvasive and the cells maintain their viability. Overall, the method presented will be of significant interest for a broad community, from biologists to bioengineers.”

The researchers have filed for a patent on the technology and plan to continue developing it for tissue engineering and other applications.