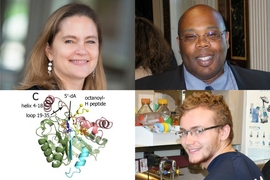 When Martin McLaughlin ’15 arrived at MIT as a freshman in the fall of 2011, he had a plan in mind. McLaughlin wanted to work in the lab of Catherine Drennan, an MIT professor of biology and chemistry, and Howard Hughes Medical Institute (HHMI) investigator, who uses X-ray crystallography to study proteins.

And so McLaughlin, with Drennan’s approval, started doing research in addition to taking a normal course load, as part of MIT’s Undergraduate Research Opportunities Program (UROP). The project he focused on was challenging: figuring out precisely how an enzyme called lipoyl synthase (LipA) acts as a catalyst in reactions that produce lipoic acid. Our metabolisms need lipoic acid to convert food into energy, but the process through which it is naturally produced has been unclear.

Specifically, McLaughlin, as part of a larger research team featuring scientists from MIT and Penn State University, was trying to understand one thing above all. LipA inserts sulfur into the reaction that produces lipoic acid. But where does the sulfur come from in the first place?

Now McLaughlin’s work has produced a notable answer, in a paper published today. LipA, in an unusual chemical arrangement, removes the sulfur from an iron-sulfur cluster that it already contains. In effect, LipA “cannibalizes” itself to catalyze the reaction that produces lipoic acid.

“The enzyme is actually cannibalizing its own cluster, pulling it out and putting in sulfur,” Drennan explains. “The definition of a catalyst is that it’s not being consumed. So this goes against all the fundamentals really, that the enzyme would just destroy itself.” Yet that is what the results show.

The finding could have long-term applications in medicine and agriculture, and is also generally significant within biochemistry research, since solving the LipA mystery suggests a means by which other enzymes use sulfur in similar settings.

“It just wasn’t understood how nature inserts sulfur into unactivated carbon centers,” says Squire Booker, a professor of chemistry and of biochemistry and molecular biology at Penn State, and an HHMI investigator, whose own research group made essential contributions to the finding. Booker, who as it happens received his PhD from MIT in 1994, adds: “We knew how the process takes place for incorporation of oxygen, for example. But we didn’t know how the sulfur goes in, and we didn’t know what the source of the sulfur was.”

The new paper, “Crystallographic snapshots of sulfur insertion by lipoyl synthase,” is being published today in the Proceedings of the National Academies of Science (PNAS). The authors are McLaughlin; Nicholas D. Lanz, a graduate student at Penn State; Peter J. Goldman, a former Drennan lab graduate student; Kyung-Hoon Lee, a researcher in Booker’s lab; Booker; and Drennan.

Arrive at MIT on Thursday; start research on Monday

Remarkably, McLaughlin’s work on LipA predates his time at MIT. McLaughlin was a student at State College High School in State College, Pennsylvania, and already interested in science, when he decided to see if he could volunteer in a lab at nearby Penn State. Before long, McLaughlin had connected with Booker, who was amenable to showing high school students the research ropes.

“Squire said, ‘Sure, you can work in my lab,’” McLaughlin recounts. “So we met and he told me I’d be setting up crystallization trials in an anaerobic chamber. I had no idea what that meant.”

It meant McLaughlin would be using a biology “glove box” — putting on gloves and reaching into a small, oxygen-free box to try to crystallize proteins. That is, researchers put proteins in solutions which evaporate, and under certain circumstances the proteins will crystallize in a way that allows them to be further analyzed.

“My job was to set up all of these crystallization experiments,” says McLaughlin. “I got lucky and got crystals for a few of those proteins, and one of them was lipoyl synthase.”

“Martin really was somebody very different,” Booker says. “He was aggressive, in a good way, incredibly motivated. He was so excited about science. Within a week, he said, ‘I’m going to need a key to the lab.’”

By the time he graduated from high school, McLaughlin had become proficient in doing the lab work, and had also gotten accepted to MIT. Booker and Drennan were already collaborating on the project, so Booker, acting as a catalyst, suggested to McLaughlin he could work on the sulfur problem with Drennan at MIT.

“Martin emailed me that he’s coming to MIT for undergrad, and asked if he could work in my research group,” Drennan recalls. “And I said ‘Absolutely.’ He said, ‘Well, okay, I might need a little time to settle into MIT.’ So I’m thinking sophomore year, or something. Then he said, ‘I arrive on Thursday, I unpack on Friday. Could I wait until the following Monday to start in the lab?’ Which is a week before classes start. He shows up in the lab apologizing for how long it took him to arrive.”

In the meantime, an important advance had been made by Nicholas Lanz, a Penn State graduate student, who found that in certain circumstances, molecules containing carbon form a bond with iron-sulfur clusters in such a way that an iron atom disappears — leaving an “extra” sulfur atom available for another reaction. In a sense, this showed that the conditions for the chemical cannibalization existed.

“For us, this was an important discovery, because it showed that the iron-sulfur cluster actually can be cannibalized in the reaction,” Booker says. “We saw it.”

Lanz prepared a version of this molecule and turned it over to McLaughlin, who then crystallized it and was able to perform the analysis of the structures and mechanisms showing that LipA, a bit counterintuitively, was indeed using its own sulfur atoms to help produce lipoic acid.

“Crystallography is a little unusual in that it’s very difficult to tell if you’re going to get any interesting results until you get them,” McLaughlin says. “You spend months or years working on getting a single crystal. I always hoped it would work, but I definitely wouldn’t say I knew it would work. It was an interesting enough system that I was willing to spend years on it, if that’s what was needed.”

Notably, when McLaughlin started at MIT, Drennan adds, her lab workers had been trying to get high-quality crystals of LipA for many years. “My graduate students had all but given up, and then Martin arrived,” she says.

The researchers emphasize that there are still many things about LipA that must be studied further — including how the iron-sulfur clusters get rebuilt after being cannibalized. That said, there are many potential applications that could come from understanding the natural production of lipoic acid.

A synthetic version of lipoic acid is currently manufactured and used as a medical supplement in some countries, to combat diabetes, among other conditions. But it is also possible to envision drugs that target the reaction in order to stop multiple diseases, including some cancers and tuberculosis. (The molecule used in the research came from a tuberculosis bacterium, in fact.) Lipoic acid is also a livestock feed supplement manufactured in a “costly multistep synthesis,” the researchers point out in the paper, which could become simplified.

For now, the researchers are pleased to have made the current advance, and McLaughlin — who is now a doctoral student at the University of Illinois — emphasizes his good fortune in having been in the middle of the LipA story.

“I’m so grateful to Squire and to Cathy,” McLaughlin says. “They let a high school and undergraduate student work on some of their coolest projects. Both of those labs are great places to become a scientist.” And, he adds: “MIT is a very intellectually rich environment. It’s very difficult to have a boring conversation at MIT.”