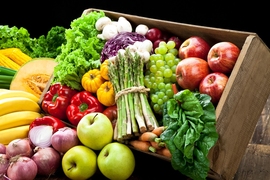 ↓ Download Image
Caption: Researchers have discovered how some organisms can safely process oxalate, which is found in many fruits and vegetables. This discovery could lead to new ways to lessen the harmful effects that can occur when oxalate builds up in humans, who cannot metabolize this molecule.

Caption:
Researchers have discovered how some organisms can safely process oxalate, which is found in many fruits and vegetables. This discovery could lead to new ways to lessen the harmful effects that can occur when oxalate builds up in humans, who cannot metabolize this molecule.

A wide variety of fruits and vegetables contain oxalate. But humans and most other animals lack the ability to metabolize this molecule — that is, to break it down while digesting it. And so for some people, a buildup of oxalate is associated with kidney stones, arthritis, and even kidney failure.

At the same time, some plants, fungi, and bacteria are able to break down oxalate. Now MIT scientists, in collaboration with colleagues at the University of Michigan, have identified a previously unknown mechanism through which this process occurs, a discovery that could help researchers drive toward new ways of lessening oxalate’s harmful effects on humans.

“This is unprecedented chemistry, what this enzyme does,” says Catherine Drennan, a professor of biology and chemistry at MIT, whose lab team made the discovery. “This particular enzyme just takes it [oxalate] and splits it. It’s always fantastic when the structure shows you the answer and it’s something you never guessed.”

The findings are detailed in a newly published paper, “One-carbon chemistry of oxalate oxidoreductase captured by X-ray crystallography,” appearing today in Proceedings of the National Academy of Sciences. Drennan is the corresponding author of the paper.

The molecule oxalate has two carbon atoms and four oxygen atoms. The carbons are connected to each other, and each connects separately to two oxygen atoms. Crucially, it also has a double negative charge coming from two “extra” electrons in the molecule.

The OOR enzyme, a large and complex molecule, binds with oxalate in such a way as to neutralize the negative charge, and, in a separate action, it breaks the carbon-carbon bond at the center of oxalate. This is what the researchers call the “bait-and-switch” process — because the enzyme first binds oxalate using its positive charge to attract the negatively charged molecule, before altering the charge environment through two protein movements in order to break the oxalate down.

“There are [just] these two movements,” Drennan observes. “The simplest things are the most elegant and beautiful.”

The researchers made the discovery through X-ray crystallography, which reveals molecular structures at the atomic scale. By taking a series of X-rays during the OOR-oxalate reaction process, they were able to determine the dynamics of the interaction through which OOP metabolizes oxalate.

“By solving a number of structures, I call them snapshots, we can watch in a way the action take place, because we have a series of pictures at various different time-points along the reaction mechanism,” Drennan explains. “And that’s super-cool. I think my favorite thing about crystallography is when you can do that.”

Ultimately, Drennan and her colleagues hope that identifying the mechanism of oxalate breakdown will help scientists figure out some ways of letting people reduce their oxalate levels if needed. Some people, as Drennan notes, carry the bacteria that can metabolize oxalate, but other people do not.

Drennan suggests it will be increasingly useful to grasp how these kinds of processes, or our lack of them, factor into human health issues.

“We have kind of been ignoring this huge aspect of human health,” Drennan says. “I think as we start understanding the importance of those microbes [that are] doing chemistry for us, I think we’re going to really appreciate it.”

Funding for the research was provided by the National Institutes of Health, the National Science Foundation, and the Martin Family Society of Fellows for Sustainability.

New evidence for how a rare form of liver cancer arises