Caption:
This summer marks the 30th anniversary of the MIT-THU Joint Urban Design Studio program, a collaboration between MIT’s Department of Urban Studies and Planning and Tsinghua University. Called the “Beijing Studio,” the program is one of the longest running academic engagements between the U.S. and China.

Caption:
Every other summer, the Beijing Studio brings up to 20 MIT students to work with Chinese counterparts — more than 400 overall since the program’s inception. Here, MIT and Tsinghua University students view an exhibition commemorating the studio’s history. The exhibition, which opened at the Beijing Planning Exhibition Hall near Tiananmen Square on June 12, displays over 100 panels showcasing student projects from past studios.

Caption:
A hallmark of the Beijing Studio is asking students to tackle real-world challenges for Chinese cities. For this year’s joint urban studio, student teams were asked to develop plans to regenerate the Shanghai Minsheng Dock, an iconic 20th-century industrial district on the Huangpu River. A dramatic feature of the site is its towering rice grain elevators, which students proposed converting to uses ranging from an urban food farm to an advanced library and data center.

Caption:
Longtime collaborators: MIT professor Dennis Frenchman (center) sits with Professor Wu Liangyong (right) of Tsinghua University during the celebration of the program anniversary. Wu was a founder of the studio in 1985, and Frenchman has played a central role since 1987.

This winter, China released its 13th “Five-Year Plan,” a socioeconomic blueprint for designing the country’s future. Alongside measures to improve per capita income, life expectancy, air and water quality, innovation, and other initiatives to build a healthier and more prosperous society, the plan also calls for “new-type urbanization.”

With targets for urban population growth, transportation, shifting industry to city centers, investment in urban infrastructure, socioeconomic development, and a host of other goals, new-type urbanization is a concept that elicits a smile from MIT Department of Urban Studies and Planning (DUSP) Professor Dennis Frenchman.

“In Shanghai, for example, the government would step back from development on any new land and refocus the city on urban regeneration, higher density, and more humane development,” Frenchman says. “It’s personally and professionally exciting to see this shift. These are principles we’ve been promoting with our colleagues in China for 30 years.”

Since 1987, Frenchman has taught in the MIT-THU Joint Urban Design Studio program, a collaboration with Tsinghua University that brings up to 20 MIT students to China every other summer to spend a month grappling with urban design issues in a country undergoing dramatic — and continuous — transition. 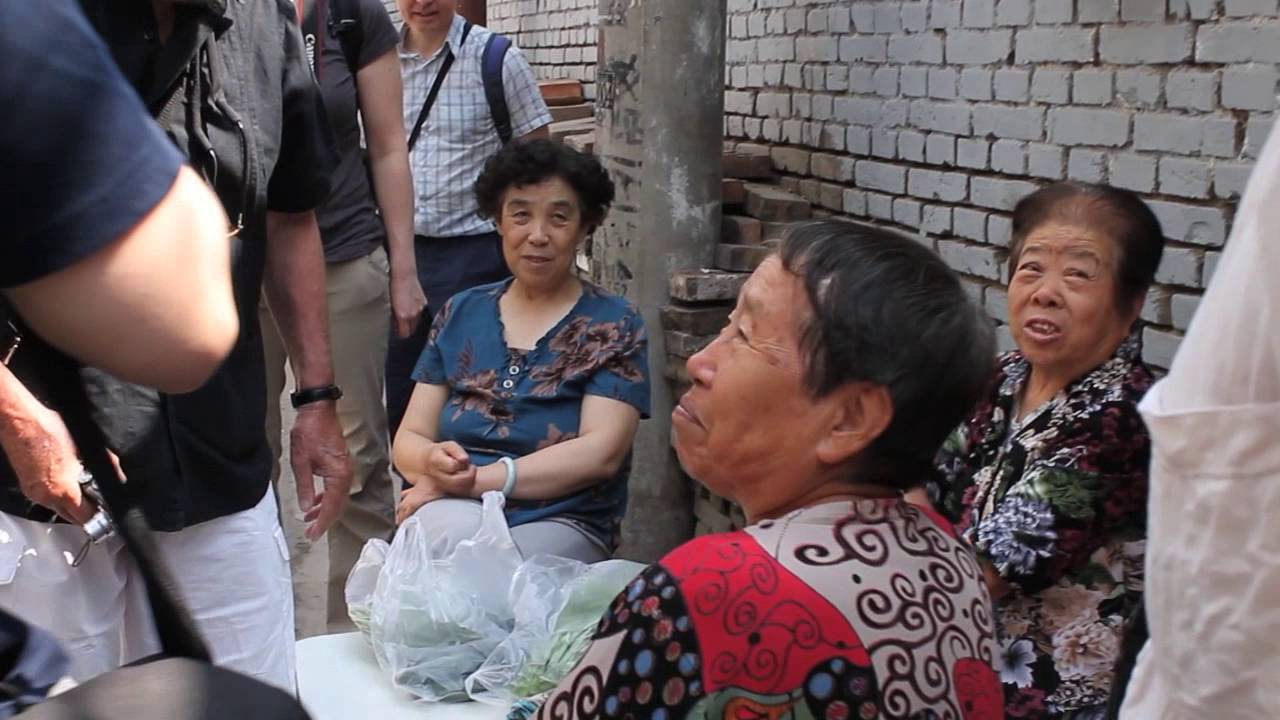 Play video
This year, MIT's Department of Urban Studies and Planning celebrates 30 years of collaboration with Tsinghua University through the MIT-THU Joint Urban Design Studio program. In 2016, the documentary “Citify” premiered as part of a series of events celebrating the anniversary. This 17-minute documentary traces China’s phenomenal urban transformation over the studio’s three decades.

Now celebrating its 30th anniversary, the “Beijing Studio,” as it is called, has consistently taken on thorny urban design challenges in Beijing and other cities. Studio titles read like a recent history of Chinese urbanism: Regenerating Pipe Street and White Rice Street (1985–87); Rediscovering the Grand Canal (1998); Designing a City on the Rail (2002); Redevelopment of the Shougang Capital Steel Plant (2008); and Making Clean Energy Cities (2010-14). Along the way, the MIT students and their Chinese partners have tackled topics from the design of new mixed-use districts to historic preservation and economic regeneration to transit-oriented development.

For Frenchman, the Beijing Studio has been a touchstone throughout his life, giving him the opportunity to return to the same place year after year. “It’s made me humble that no matter what we design, there are other forces in the life of a city that you can’t control,” he says. “At the same time, proposals and plans that may have seemed minor at the outset can end up being extremely important to the form of the city. Over 30 years you can track what the impact is.”

This summer, MIT and Tsinghua are marking the 30th anniversary of the Joint Studio with a series of events. On June 12, a large-scale exhibition of student designs opened at the Beijing Planning Exhibition Hall near Tiananmen Square. The opening premiered a documentary film, “Citify.” (See video above.) Directed and filmed by Elyse Frenchman, who has accompanied her father to every studio since the mid-1990s, the documentary traces China’s phenomenal urban transformation over 30 years through the work of the studio.

Two conferences were held in Shanghai and Beijing on urban regeneration and clean-energy urban design, key themes of the studio at different point in time. A book charting student work and experiences since the studio’s inception is being published by Tsinghua University Press.

And Frenchman, MIT DUSP lecturer and architect Jota Samper, and 32 students teamed up for another studio on a real urban challenge in China: the regeneration of Shanghai’s Minsheng Dock, an iconic 20th-century industrial district on the Huangpu River.

The collaboration with Tsinghua University began in 1978, when DUSP professor Kevin Lynch visited Beijing and plans emerged for a joint academic program in city design. It took until 1985 for the first studio to be organized by professors Gary Hack, Wu Liangyong, and Zhu Xixuan. Frenchman joined two years later, followed in 1992 by professors Jan Wampler and Zhang Jie. The latter three have led the studio continuously for over two decades.

“The collaboration has really been one of mutual benefit,” says Zhang, professor of architecture at Tsinghua who has led the program there since 1998. “It has brought a lot of fresh air to the school of architecture.”

Many of the initial projects of the studio focused on the center of Beijing. As an example, Frenchman points to studio proposals in the late 1990s to reclaim the thousand-year-old Grand Canal in the Shi Sha Hai lakes area. One proposal was implemented, providing an axis of regeneration and humanely scaled pedestrian activities in the heart of the city.

“We have been in the avant-garde of thinking for the city,” says Zhang. “Today what’s happened to the city’s conservation principles and techniques are very much influenced by the early work we did in the 1990s.”

In recent years, the program focused on sustainable, low-carbon development. Frenchman, along with DUSP Professor P. Christopher Zegras and PhD student Cressica Brassier, developed the “Energy Proforma,” a tool to rapidly assess the comprehensive energy consumption of a neighborhood. “The design of the neighborhood affects the daily life of the people — where they work, how they travel, their use of space — and that, in turn, affects energy consumption,” Frenchman says.

That focus inspired Alexis Wheeler, who graduated from MIT in 2013 with degrees in city planning and real estate, to design a model neighborhood in Jinan, 250 miles south of Beijing. A participant in the 2012 studio, Wheeler was intrigued by the challenge to design a model for development that would reduce energy consumption while preserving the street life of traditional communities, as an alternative to the predominant “tower-in-the-park” schemes.

Wheeler credits Frenchman with setting the tone of creative collaboration for the studio. “He is incredibly talented and has a great intuitive sense for design, but he is also so warm and encouraging,” she says. “You want to rush to the classroom or the studio to be around him.”

The most important and lasting impact of the program, say Frenchman and Zhang, is less immediately visible: the hundreds of students on which the experience has left its mark. “It changes people’s lives,” says Zhang. “A lot of American students who join the studio later find a job in Beijing. We have a lot of Chinese students go to the States to study or find a job. It’s a two-way exchange.” Students from the program have risen to top positions in government in both countries.

Wheeler, now head urban designer for the Borough of Queens in New York City, incorporates lessons from her experience in Beijing when approaching the large Chinese community in Flushing, as well as other ethnic groups such as those from the Caribbean. “The more you expose yourself and live with and learn from other cultures, the better you are at your job when you are in a role as a public servant trying to design for a community,” she says.

That kind of sensitivity can only be gained from prolonged exposure in a new environment, says lecturer Samper. “You spend so much time in the classroom trying to explain theories of cultural difference as it relates to development, but it isn’t until the student goes there that the theory clicks.” Although he has led similar studios in Latin America and India, he doesn’t exempt himself from the transformative power of his own first exposure to China: “I am prepared to not be prepared for what is going to happen.”