For first time, researchers see individual atoms keep away from each other or bunch up as pairs 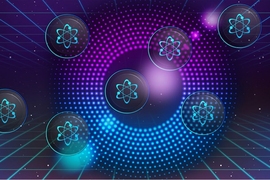 ↓ Download Image
Caption: “Learning from this model, we can understand what’s really going on in these superconductors, and what one should do to make higher-temperature superconductors, approaching hopefully room temperature,” says Martin Zwierlein, professor of physics and principal investigator in MIT’s Research Laboratory of Electronics.

Caption:
“Learning from this model, we can understand what’s really going on in these superconductors, and what one should do to make higher-temperature superconductors, approaching hopefully room temperature,” says Martin Zwierlein, professor of physics and principal investigator in MIT’s Research Laboratory of Electronics.
Credits:
Illustration: Sampson Wilcox

If you bottle up a gas and try to image its atoms using today’s most powerful microscopes, you will see little more than a shadowy blur. Atoms zip around at lightning speeds and are difficult to pin down at ambient temperatures.

If, however, these atoms are plunged to ultracold temperatures, they slow to a crawl, and scientists can start to study how they can form exotic states of matter, such as superfluids, superconductors, and quantum magnets.

Physicists at MIT have now cooled a gas of potassium atoms to several nanokelvins — just a hair above absolute zero — and trapped the atoms within a two-dimensional sheet of an optical lattice created by crisscrossing lasers. Using a high-resolution microscope, the researchers took images of the cooled atoms residing in the lattice.

By looking at correlations between the atoms’ positions in hundreds of such images, the team observed individual atoms interacting in some rather peculiar ways, based on their position in the lattice. Some atoms exhibited “antisocial” behavior and kept away from each other, while some bunched together with alternating magnetic orientations. Others appeared to piggyback on each other, creating pairs of atoms next to empty spaces, or holes.

The team believes that these spatial correlations may shed light on the origins of superconducting behavior. Superconductors are remarkable materials in which electrons pair up and travel without friction, meaning that no energy is lost in the journey. If superconductors can be designed to exist at room temperature, they could initiate an entirely new, incredibly efficient era for anything that relies on electrical power.

Martin Zwierlein, professor of physics and principal investigator at MIT’s NSF Center for Ultracold Atoms and at its Research Laboratory of Electronics, says his team’s results and experimental setup can help scientists identify ideal conditions for inducing superconductivity.

Zwierlein and his colleagues’ results appear in the Sept. 16 issue of the journal Science. Co-authors include experimentalists from the MIT-Harvard Center for Ultracold Atoms, MIT’s Research Laboratory of Electronics, and two theory groups from San Jose State University, Ohio State University, the University of Rio de Janeiro, and Penn State University.

“Atoms as stand-ins for electrons”

Today, it is impossible to model the behavior of high‐temperature superconductors, even using the most powerful computers in the world, as the interactions between electrons are very strong. Zwierlein and his team sought instead to design a “quantum simulator,” using atoms in a gas as stand-ins for electrons in a superconducting solid.

The group based its rationale on several historical lines of reasoning: First, in 1925 Austrian physicist Wolfgang Pauli formulated what is now called the Pauli exclusion principle, which states that no two electrons may occupy the same quantum state — such as spin, or position — at the same time. Pauli also postulated that electrons maintain a certain sphere of personal space, known as the “Pauli hole.”

His theory turned out to explain the periodic table of elements: Different configurations of electrons give rise to specific elements, making carbon atoms, for instance, distinct from hydrogen atoms.

The Italian physicist Enrico Fermi soon realized that this same principle could be applied not just to electrons, but also to atoms in a gas: The extent to which atoms like to keep to themselves can define the properties, such as compressibility, of a gas.

“He also realized these gases at low temperatures would behave in peculiar ways,” Zwierlein says.

British physicist John Hubbard then incorporated Pauli’s principle in a theory that is now known as the Fermi-Hubbard model, which is the simplest model of interacting atoms, hopping across a lattice. Today, the model is thought to explain the basis for superconductivity. And while theorists have been able to use the model to calculate the behavior of superconducting electrons, they have only been able to do so in situations where the electrons interact weakly with each other.

“That’s a big reason why we don’t understand high-temperature superconductors, where the electrons are very strongly interacting,” Zwierlein says. “There’s no classical computer in the world that can calculate what will happen at very low temperatures to interacting [electrons]. Their spatial correlations have also never been observed in situ, because no one has a microscope to look at every single electron.”

Zwierlein’s team sought to design an experiment to realize the Fermi-Hubbard model with atoms, in hopes of seeing behavior of ultracold atoms analogous to that of electrons in high-temperature superconductors.

The group had previously designed an experimental protocol to first cool a gas of atoms to near absolute zero, then trap them in a two-dimensional plane of a laser-generated lattice. At such ultracold temperatures, the atoms slowed down enough for researchers to capture them in images for the first time, as they interacted across the lattice.

At the edges of the lattice, where the gas was more dilute, the researchers observed atoms forming Pauli holes, maintaining a certain amount of personal space within the lattice.

“They carve out a little space for themselves where it’s very unlikely to find a second guy inside that space,” Zwierlein says.

Where the gas was more compressed, the team observed something unexpected: Atoms were more amenable to having close neighbors, and were in fact very tightly bunched. These atoms exhibited alternating magnetic orientations.

“These are beautiful, antiferromagnetic correlations, with a checkerboard pattern — up, down, up, down,” Zwierlein describes.

At the same time, these atoms were found to often hop on top of one another, creating a pair of atoms next to an empty lattice square. This, Zwierlein says, is reminiscent of a mechanism proposed for high-temperature superconductivity, in which electron pairs resonating between adjacent lattice sites can zip through the material without friction if there is just the right amount of empty space to let them through.

Ultimately, he says the team’s experiments in gases can help scientists identify ideal conditions for superconductivity to arise in solids.

Zwierlein explains: “For us, these effects occur at nanokelvin because we are working with dilute atomic gases. If you have a dense piece of matter, these same effects may well happen at room temperature.”

Currently, the team has been able to achieve ultracold temperatures in gases that are equivalent to hundreds of kelvins in solids. To induce superconductivity, Zwierlein says the group will have to cool their gases by another factor of five or so.

“We haven’t played all of our tricks yet, so we think we can get colder,” he says.

This research was supported in part by the National Science Foundation, the Air Force Office of Scientific Research, the Army Research Office, and the David and Lucile Packard Foundation.