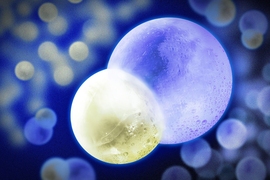 ↓ Download Image
Caption: MIT researchers have successfully cooled a gas of sodium potassium (NaK) molecules to a temperature of 500 nanokelvin. In this artist's illustration, the NaK molecule is represented with frozen spheres of ice merged together: the smaller sphere on the left represents a sodium atom, and the larger sphere on the right is a potassium atom.
Credits: Illustration: Jose-Luis Olivares/MIT 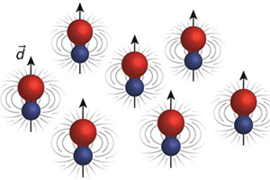 ↓ Download Image
Caption: Ultracold molecules experience strong interactions over large distances in the presence of an electric field. The field polarizes the molecules, inducing a dipole moment (arrow), an imbalance of positive and negative charge. The dipoles interact with each other in a pattern familiar from the way two magnets interact – they can attract when aligned head to tail, or repel when they are side by side.
The MIT team induced the strongest dipoles in ultracold molecules yet.
Credits: Image: Jee Woo Park and Sebastian Will 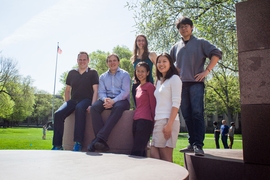 Caption:
MIT researchers have successfully cooled a gas of sodium potassium (NaK) molecules to a temperature of 500 nanokelvin. In this artist's illustration, the NaK molecule is represented with frozen spheres of ice merged together: the smaller sphere on the left represents a sodium atom, and the larger sphere on the right is a potassium atom.
Credits:
Illustration: Jose-Luis Olivares/MIT

Caption:
Ultracold molecules experience strong interactions over large distances in the presence of an electric field. The field polarizes the molecules, inducing a dipole moment (arrow), an imbalance of positive and negative charge. The dipoles interact with each other in a pattern familiar from the way two magnets interact – they can attract when aligned head to tail, or repel when they are side by side.
The MIT team induced the strongest dipoles in ultracold molecules yet.
Credits:
Image: Jee Woo Park and Sebastian Will

The air around us is a chaotic superhighway of molecules whizzing through space and constantly colliding with each other at speeds of hundreds of miles per hour. Such erratic molecular behavior is normal at ambient temperatures.

But scientists have long suspected that if temperatures were to plunge to near absolute zero, molecules would come to a screeching halt, ceasing their individual chaotic motion and behaving as one collective body. This more orderly molecular behavior would begin to form very strange, exotic states of matter — states that have never been observed in the physical world.

Now experimental physicists at MIT have successfully cooled molecules in a gas of sodium potassium (NaK) to a temperature of 500 nanokelvins — just a hair above absolute zero, and over a million times colder than interstellar space. The researchers found that the ultracold molecules were relatively long-lived and stable, resisting reactive collisions with other molecules. The molecules also exhibited very strong dipole moments — strong imbalances in electric charge within molecules that mediate magnet-like forces between molecules over large distances.

Martin Zwierlein, professor of physics at MIT and a principal investigator in MIT's Research Laboratory of Electronics, says that while molecules are normally full of energy, vibrating and rotating and moving through space at a frenetic pace, the group’s ultracold molecules have been effectively stilled — cooled to average speeds of centimeters per second and prepared in their absolute lowest vibrational and rotational states.

“We are very close to the temperature at which quantum mechanics plays a big role in the motion of molecules,” Zwierlein says. “So these molecules would no longer run around like billiard balls, but move as quantum mechanical matter waves. And with ultracold molecules, you can get a huge variety of different states of matter, like superfluid crystals, which are crystalline, yet feel no friction, which is totally bizarre. This has not been observed so far, but predicted. We might not be far from seeing these effects, so we’re all excited.”

Zwierlein, along with graduate student Jee Woo Park and postdoc Sebastian Will — all of whom are members of the MIT-Harvard Center of Ultracold Atoms — have published their results in the journal Physical Review Letters.

Every molecule is composed of individual atoms that are bonded together to form a molecular structure. The simplest molecule, resembling a dumbbell, is made up of two atoms connected by electromagnetic forces. Zwierlein’s group sought to create ultracold molecules of sodium potassium, each consisting of a single sodium and potassium atom.

However, due to their many degrees of freedom — translation, vibration, and rotation — cooling molecules directly is very difficult. Atoms, with their much simpler structure, are much easier to chill. As a first step, the MIT team used lasers and evaporative cooling to cool clouds of individual sodium and potassium atoms to near absolute zero. They then essentially glued the atoms together to form ultracold molecules, applying a magnetic field to prompt the atoms to bond — a mechanism known as a “Feshbach resonance,” named after the late MIT physicist Herman Feshbach.

“It’s like tuning your radio to be in resonance with some station,” Zwierlein says. “These atoms start to vibrate happily together, and form a bound molecule.”

The resulting bond is relatively weak, creating what Zwierlein calls a “fluffy” molecule that still vibrates quite a bit, as each atom is bonded over a long, tenuous connection. To bring the atoms closer together to create a stronger, more stable molecule, the team employed a technique first reported in 2008 by groups from the University of Colorado, for potassium rubidium (KRb) molecules, and the University of Innsbruck, for non-polar cesium­ (Ce2­) molecules.

For this technique, the newly created NaK molecules were exposed to a pair of lasers, the large frequency difference of which exactly matched the energy difference between the molecule’s initial, highly vibrating state, and its lowest possible vibrational state. Through absorption of the low-energy laser, and emission into the high-energy laser beam, the molecules lost all their available vibrational energy.

With this method, the MIT group was able to bring the molecules down to their lowest vibrational and rotational states — a huge drop in energy.

In their earlier work, the Colorado group observed a significant drawback of their ultracold potassium rubidium molecules: They were chemically reactive, and essentially came apart when they collided with other molecules. That group subsequently confined the molecules in crystals of light to inhibit such chemical reactions.

Zwierlein’s group chose to create ultracold molecules of sodium potassium, as this molecule is chemically stable and naturally resilient against reactive molecular collisions.

“When two potassium rubidium molecules collide, it is more energetically favorable for the two potassium atoms and the two rubidium atoms to pair up,” Zwierlein says. “It turns out with our molecule, sodium potassium, this reaction is not favored energetically. It just doesn’t happen.”

In their experiments, Park, Will, and Zwierlein observed that their molecular gas was indeed stable, with a relatively long lifetime, lasting about 2.5 seconds.

“In the case where molecules are chemically reactive, one simply doesn’t have time to study them in bulk samples: They decay away before they can be cooled further to observe interesting states,” Zwierlein says. “In our case, we hope our lifetime is long enough to see these novel states of matter.”

By first cooling atoms to ultralow temperatures and only then forming molecules, the group succeeded in creating an ultracold gas of molecules, measuring one thousand times colder than what can be achieved by direct cooling techniques.

To begin to see exotic states of matter, Zwierlein says molecules will have to be cooled still a bit further, to all but freeze them in place. “Now we’re at 500 nanokelvins, which is already fantastic, we love it. A factor of 10 colder or so, and the music starts playing.”

This research was supported in part by the National Science Foundation, the Air Force Office of Scientific Research, the Army Research Office, and the David and Lucile Packard Foundation.

MIT physicists have cooled molecules to just above absolute zero, reports Macrina Cooper-White for The Huffington Post. “The team hopes to cool molecules to an even lower temperature, study the interactions between them, and learn more about the limits on their lifetime,” Cooper-White explains.

Jesse Emspak of Live Science writes that MIT researchers have successfully cooled molecules to just above absolute zero. The researchers found that when the molecules were cooled to 500 nanokelvins they “were quite stable, and tended not to react with other molecules around them.”