Clouds of gases that bounce off each other could help physicists model the behavior of high-temperature superconductors and other unusual materials.
Anne Trafton, MIT News Office
Publication Date:

Caption:
Martin Zwierlein, assistant professor of physics
Credits:
Photo: Greg Hren
When two clouds of gas meet, they normally pass right through each other. But now, MIT physicists have created clouds of ultracold gases that bounce off each other like bowling balls, even though they are a million times thinner than air. This marks the first time that such impenetrable gases have been observed.

While this experiment involved clouds of lithium atoms cooled to near absolute zero, the findings could also help explain the behavior of other strongly interacting systems such as neutron stars, high-temperature superconductors and quark-gluon plasma: the hot soup of elementary particles that formed immediately after the Big Bang. A paper describing the work appears in the April 14 issue of Nature. 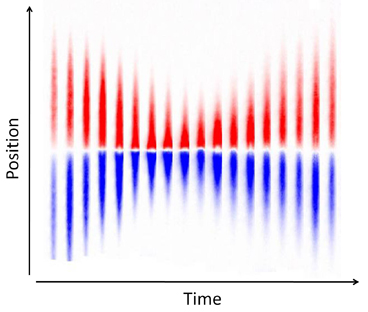 Two gas clouds (one red and one blue), each a million times thinner than air, are seen to completely repel each other under the influence of strong, quantum-mechanical interactions. Such gas clouds can model matter under extreme conditions, such as neutron stars or the quark-gluon plasma of the early universe.
Image: Martin Zwierlein
The researchers, led by MIT Assistant Professor of Physics Martin Zwierlein, carried out their experiment with an isotope of lithium that belongs to a class of particles called fermions. All building blocks of matter — electrons, protons, neutrons and quarks — are fermions.

Different states of fermionic matter are distinguished by their mobility. For example, electrons can be mobile, as in a metal; immobile, as in an insulator; or flow without resistance, as in a superconductor. However, for many types of material, including high-temperature superconductors, it is not known what circumstances induce fermions to form a given state of matter. This is especially true of materials with strongly interacting fermions — that is, fermions that are more likely to collide with each other (also called scattering).

In this study, the researchers set out to model strongly interacting systems, using lithium gas atoms to stand in for electrons. By tuning the lithium atoms’ energy states with a magnetic field, they made the atoms interact with each other as strongly as the laws of nature allow: they scatter every time they encounter another atom.

To eliminate any effects of temperature, the researchers cooled the gas to about 100 billionths of one Kelvin, close to absolute zero (-273 degrees Celsius). They used magnetic forces to separate the gas into two clouds, labeled “spin up” and “spin down,” then made the clouds collide in a trap formed by laser light. Instead of passing through each other, as gases would normally do, the clouds repelled in dramatic fashion.

“When we saw that these ultra dilute puffs of gas bounce off each other, we were completely in awe,” says graduate student Ariel Sommer, lead author of the Nature paper.

The gas clouds did eventually diffuse into each other, but it took more than an entire second — an extremely long time for events occurring at microscopic scales. In fact, this diffusion was shown by the MIT researchers to be the slowest allowed by quantum mechanics.

John Thomas, professor of physics at Duke University, called the result “amazing,” given the fact that under normal circumstances, two clouds of gases composed of a mix of up and down spins diffuse into each other immediately. “It’s quite remarkable that these gases would actually turn around and bounce,” says Thomas, who was not involved in this research.

The research, conducted at the MIT-Harvard Center for Ultracold Atoms, is part of a program aimed at using ultracold atoms as easily controllable model systems to study the properties of complex materials, such as high-temperature superconductors and novel magnetic materials that have applications in data storage and improving energy efficiency.

In future work, the researchers plan to confine the lithium gases to two dimensions, which will allow them to simulate the mostly two-dimensional confinement of electrons in high-temperature superconductors.

Their work can also be used to model the behavior of other strongly interacting systems, such as high-density neutron stars, which are only about 10 kilometers in diameter but more massive than our sun.

Another substance that interacts as strongly as the atoms in the ultracold lithium gas clouds created at MIT is the quark-gluon plasma that existed in the beginning of our universe and has been recreated in particle accelerators, such as the Large Hadron Collider at CERN, by colliding atomic nuclei at energies corresponding to a trillion degrees. In the “Little Fermion Collider” in Zwierlein’s lab, strongly interacting matter can be studied at ultralow temperatures a few billionths of a degree above absolute zero.