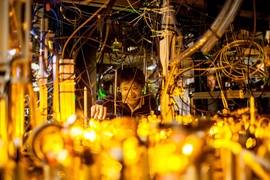 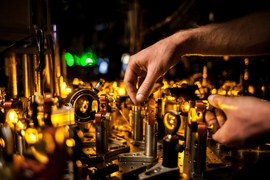 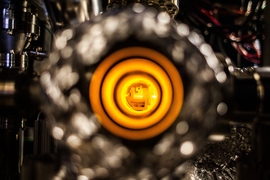 ↓ Download Image
Caption: Sodium atoms diffuse out of an oven to form an atomic beam, which is then slowed and trapped using laser light.
Credits: Photo: Jose-Luis Olivares/MIT 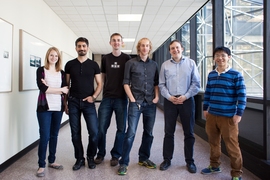 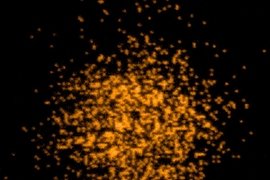 ↓ Download Image
Caption: A Quantum gas microscope for fermionic atoms. The atoms, potassium-40, are cooled during imaging by laser light, allowing thousands of photons to be collected by the microscope.
Credits: Credit: Lawrence Cheuk/MIT

Caption:
Laser beams are precisely aligned before being sent into the vacuum chamber.

Caption:
Sodium atoms diffuse out of an oven to form an atomic beam, which is then slowed and trapped using laser light.
Credits:
Photo: Jose-Luis Olivares/MIT

Caption:
A Quantum gas microscope for fermionic atoms. The atoms, potassium-40, are cooled during imaging by laser light, allowing thousands of photons to be collected by the microscope.
Credits:
Credit: Lawrence Cheuk/MIT

Fermions are the building blocks of matter, interacting in a multitude of permutations to give rise to the elements of the periodic table. Without fermions, the physical world would not exist.

Examples of fermions are electrons, protons, neutrons, quarks, and atoms consisting of an odd number of these elementary particles. Because of their fermionic nature, electrons and nuclear matter are difficult to understand theoretically, so researchers are trying to use ultracold gases of fermionic atoms as stand-ins for other fermions.

But atoms are extremely sensitive to light: When a single photon hits an atom, it can knock the particle out of place — an effect that has made imaging individual fermionic atoms devilishly hard.

Now a team of MIT physicists has built a microscope that is able to see up to 1,000 individual fermionic atoms. The researchers devised a laser-based technique to trap and freeze fermions in place, and image the particles simultaneously.

The new imaging technique uses two laser beams trained on a cloud of fermionic atoms in an optical lattice. The two beams, each of a different wavelength, cool the cloud, causing individual fermions to drop down an energy level, eventually bringing them to their lowest energy states — cool and stable enough to stay in place. At the same time, each fermion releases light, which is captured by the microscope and used to image the fermion’s exact position in the lattice — to an accuracy better than the wavelength of light.

With the new technique, the researchers are able to cool and image over 95 percent of the fermionic atoms making up a cloud of potassium gas. Martin Zwierlein, a professor of physics at MIT, says an intriguing result from the technique appears to be that it can keep fermions cold even after imaging.

“That means I know where they are, and I can maybe move them around with a little tweezer to any location, and arrange them in any pattern I’d like,” Zwierlein says.

Zwierlein and his colleagues, including first author and graduate student Lawrence Cheuk, have published their results today in the journal Physical Review Letters.

For the past two decades, experimental physicists have studied ultracold atomic gases of the two classes of particles: fermions and bosons — particles such as photons that, unlike fermions, can occupy the same quantum state in limitless numbers. In 2009, physicist Markus Greiner at Harvard University devised a microscope that successfully imaged individual bosons in a tightly spaced optical lattice. This milestone was followed, in 2010, by a second boson microscope, developed by Immanuel Bloch’s group at the Max Planck Institute of Quantum Optics.

These microscopes revealed, in unprecedented detail, the behavior of bosons under strong interactions. However, no one had yet developed a comparable microscope for fermionic atoms.

“We wanted to do what these groups had done for bosons, but for fermions,” Zwierlein says. “And it turned out it was much harder for fermions, because the atoms we use are not so easily cooled. So we had to find a new way to cool them while looking at them.”

Techniques to cool atoms ever closer to absolute zero have been devised in recent decades. Carl Wieman, Eric Cornell, and MIT’s Wolfgang Ketterle were able to achieve Bose-Einstein condensation in 1995, a milestone for which they were awarded the 2001 Nobel Prize in physics. Other techniques include a process using lasers to cool atoms from 300 degrees Celsius to a few ten-thousandths of a degree above absolute zero.

And yet, to see individual fermionic atoms, the particles need to be cooled further still. To do this, Zwierlein’s group created an optical lattice using laser beams, forming a structure resembling an egg carton, each well of which could potentially trap a single fermion. Through various stages of laser cooling, magnetic trapping, and further evaporative cooling of the gas, the atoms were prepared at temperatures just above absolute zero — cold enough for individual fermions to settle onto the underlying optical lattice. The team placed the lattice a mere 7 microns from an imaging lens, through which they hoped to see individual fermions.

However, seeing fermions requires shining light on them, causing a photon to essentially knock a fermionic atom out of its well, and potentially out of the system entirely.

“We needed a clever technique to keep the atoms cool while looking at them,” Zwierlein says.

His team decided to use a two-laser approach to further cool the atoms; the technique manipulates an atom’s particular energy level, or vibrational energy. Each atom occupies a certain energy state — the higher that state, the more active the particle is. The team shone two laser beams of differing frequencies at the lattice. The difference in frequencies corresponded to the energy between a fermion’s energy levels. As a result, when both beams were directed at a fermion, the particle would absorb the smaller frequency, and emit a photon from the larger-frequency beam, in turn dropping one energy level to a cooler, more inert state. The lens above the lattice collects the emitted photon, recording its precise position, and that of the fermion.

Zwierlein says such high-resolution imaging of more than 1,000 fermionic atoms simultaneously would enhance our understanding of the behavior of other fermions in nature — particularly the behavior of electrons. This knowledge may one day advance our understanding of high-temperature superconductors, which enable lossless energy transport, as well as quantum systems such as solid-state systems or nuclear matter.

“The Fermi gas microscope, together with the ability to position atoms at will, might be an important step toward the realization of a quantum computer based on fermions,” Zwierlein says. “One would thus harness the power of the very same intricate quantum rules that so far hamper our understanding of electronic systems.”

Zwierlein says it is a good time for Fermi gas microscopists: Around the same time his group first reported its results, teams from Harvard and the University of Strathclyde in Glasgow also reported imaging individual fermionic atoms in optical lattices, indicating a promising future for such microscopes.

Zoran Hadzibabic, a professor of physics at Trinity College, says the group’s microscope is able to detect individual atoms “with almost perfect fidelity.”

“They detect them reliably, and do so without affecting their positions — that’s all you want,” says Hadzibabic, who did not contribute to the research. “So far they demonstrated the technique, but we know from the experience with bosons that that’s the hardest step, and I expect the scientific results to start pouring out.”