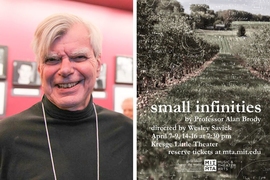 ↓ Download Image
Caption: “Small Infinities,” written by professor Alan Brody (pictured) will be performed at the Kresge Little Theater, April 7-9 and 14-16, at 7:30 pm. 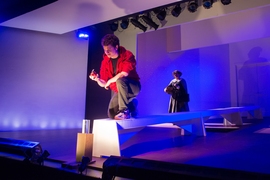 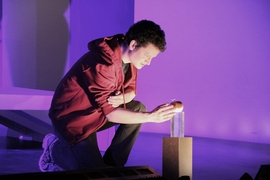 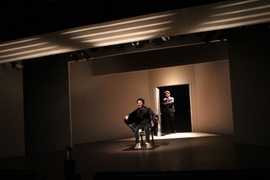 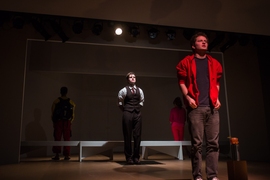 Caption:
“Small Infinities,” written by professor Alan Brody (pictured) will be performed at the Kresge Little Theater, April 7-9 and 14-16, at 7:30 pm.
Credits:
Courtesy of Alan Brody

You may have read books about Isaac Newton. But have you ever seen a play about him? Now is your chance. The MIT 2016 celebrations, commemorating the Institute’s 100th year in Cambridge, include the U.S. debut of “Small Infinities,” a work by MIT professor of theater Alan Brody. The play explores the “life and paradox” of Newton and is among many produced works written by Brody, who has won awards for plays such as “Invention for Fathers and Sons” and “The Company of Angels,” among others. “Small Infinities” will be performed at the Kresge Little Theater, April 7-9 and 14-16, at 7:30 pm. MIT News recently talked to Brody about the play.

Q. What is “Small Infinities” about?

A. It’s about Isaac Newton. And one of the things that always fascinated me about him was that he had an absolutely medieval mind. At the same time, he was the father of modern science. And that juxtaposition seemed to me to be really interesting. That’s what I started to explore as I wrote the play. There are so many contradictions in his mind. He was also a very, very difficult person.

One of the difficulties of writing a play like this is to go back into the mindset of an entire culture. And the culture of the 17th century was very, very different. The questions about God particularly had a different power in the 17th century than they do today. And I think that “my” Newton, and I have to call him that, not only believed in God deeply but believed he was doing God’s work and that he was God’s chosen [servant] to do his work. His mathematical mind was God-given and he had to serve God with it. Yet what he did was engender doubt about God in the first place.

Q. What are some of the ideas you’d like the audience to be thinking about as they walk out of the play?

A. I think the big thing is that we create heroes and dehumanize them. And one of my interests is to take historical figures, who have been canonized in one way or another, and begin to examine them as human beings, and see what emerges when that happens. And I think the contradictions I was talking about before are among them. There are other surprising things that [I have] imagined [about Newton] — not out of thin air, but that [others have] speculated about — in his personal relationships, and those are very much part of the play too.

Q. This is the U.S. debut of the play (which was once performed in India). Why is it being staged here?

A. This play and the first reading of it was really part of the beginning of the Catalyst Collaborative at MIT. And that’s the collaboration between MIT and the Underground Railway Theater and the Nora Theater Company — which are both part of the Central Square Theater. The idea is that we find the best possible plays or theater pieces about science, and make them available, not just to MIT but to the entire community, Cambridge and Boston. The movement toward plays about science is very important to us. Cambridge is just an ideal place for this event to be happening.

Bringing “the greatest show in the universe” to the people