Bringing “the greatest show in the universe” to the people 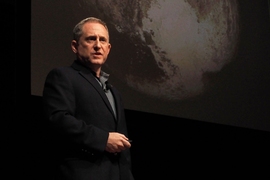 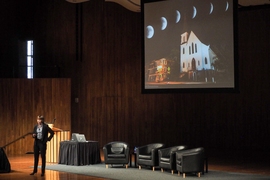 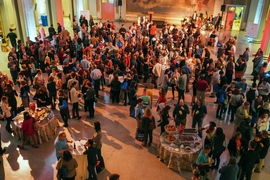 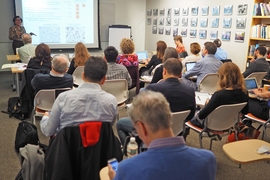 The promise of compelling science communications was on full display at MIT Oct. 9-13, as the Institute welcomed some 800 science writers, editors, and producers to ScienceWriters2015, the largest annual meeting of professional science communicators in the United States.

The meeting, a collaboration between the Knight Science Journalism (KSJ) program at MIT, the National Association of Science Writers (NASW), and the Council for the Advancement of Science Writing, provided a mixture of professional development workshops, updates on recent advances in science and engineering, and an opportunity to learn from and engage with faculty at MIT and other local institutions working on the front lines of scientific innovation.

The event also served to highlight several programs within the School of Humanities, Arts, and Social Sciences that train early- and mid-career communicators: KSJ, a nine-month fellowship in which a dozen of the world’s top journalists each year hone their skills in the communication of science, technology, health, and the environment; the Graduate Program in Science Writing, a master’s degree program in science communication; and the Program in Science, Technology, and Society (STS), which addresses the role of science and technology on human culture.

“We’ve been bringing science writers to the MIT campus in small groups for more than 30 years, and we’ve never had this many people here all at once,” Wade Roush, outreach officer for STS and principal organizer of the event, said on Sunday in Kresge Auditorium. “This is super exciting for us.”

Following a packed-house reception in Walker Memorial on Friday evening, attendees flocked the following morning to the Hyatt Regency Cambridge for professional development workshops hosted by NASW, the largest professional association for science writers in the United States. Panel discussions throughout the day included a conversation on ethics in science writing; best practices for how to reproduce content without copyright infringement; and suggestions for how to turn one’s communications work into a personal brand.

On Sunday, Maria Zuber, the E.A. Griswold Professor of Geophysics and MIT’s vice president for research, welcomed attendees to a series of presentations in which MIT researchers shared overviews of their work.

“I’m biased as a scientist, but I don’t understand why the work that we scientists do, and the work you report, isn’t always at the front of the news,” Zuber said. “With science, what do we get? We get optimism, we get inspiration, and we get hope. … Even when the news is negative, science provides the hope that that can be turned around.”

Zuber described MIT’s role in helping science communicators stress the importance of basic research at a time of decreased federal funding. She noted a recent study focusing on potential benefits of increased investment in science — case stories from effective treatments for Alzheimer’s disease to long-lasting car batteries to a future fueled by fusion power.

Sunday’s events included presentations from leading researchers at MIT and elsewhere on the latest findings from their labs and centers. Ed Boyden, an associate professor of biological engineering and brain and cognitive sciences at MIT, started the morning off with a discussion of his lab’s groundbreaking work in visualizing molecules, cells, and organisms using expansion microscopy, a way of literally enlarging a specimen for better viewing, and optogenetics, a technique in which light stimulates and activates neurons.

Alan Stern, a planetary scientist at the Southwest Research Center in Boulder, Colorado, and the principal investigator for NASA’s New Horizons mission to the solar system’s Kuiper belt region, spoke not only on the latest findings from the spacecraft, but on the outreach that helped news of the mission make the cover of 450 newspapers the day after the craft flew by Pluto on July 14.

“We’re proud we engaged the public the way that we did,” Stern said. “We knew that no one story would excite everyone, but that we could capture more people if we told multiple stories. So, some were about science, some were about the people, the team, the adversity we went through.” Stern added that his team’s communications efforts were so successful that NASA’s main website flooded with hits, and it quickly became the biggest media event for the agency in decades.

“We tried to reach people through many different kinds of media, and I think we were successful at that,” he offered, adding that the inherent popularity of Pluto itself certainly helped. “Pluto’s just a great brand … all we had to do was light a match.”

The final two days of the conference featured additional research presentations as well as tours of various labs and centers around MIT, Harvard University, and Boston University, including the MIT Plasma Science and Fusion Center and the Broad Institute of Harvard and MIT. Attendees also had the opportunity to break bread with prominent MIT scientists and engineers — such as Institute Professor Mildred Dresselhaus and Professors Lorna Gibson and Dina Katabi — during two “lunch with a luminary” sessions.

In addition to the main events at ScienceWriters2015, a select group of communicators from around the country were invited to a special nanotechnology workshop on Friday, Oct. 9. Hosted by KSJ and introduced by KSJ Director Deborah Blum, the workshop featured brief presentations by researchers — including Professors Paula Hammond and Vladimir Bulovic of MIT, and Christa Watson Wright of Harvard — who described their current work and the future of MIT.nano, a new hub of nanoscale research at the Institute. “The future will be measured in nanometers,” Bulovic said during his presentation. “There are many stories to be told.”

How can one tree tell the story of climate change?