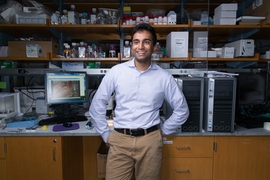 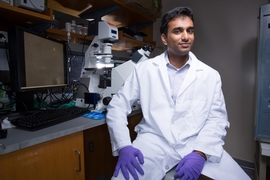 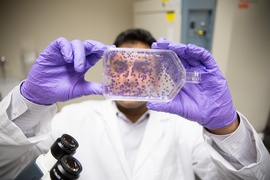 As an MIT undergraduate, Tushar Kamath regularly rode his bike across the Charles River to Massachusetts General Hospital (MGH) to retrieve blood samples from cancer patients; he then analyzed these samples on campus, at the Koch Institute for Integrative Cancer Research. Kamath, who received his BS in biological engineering in June and is now an MIT master’s student in biological engineering, says his trips back and forth across the river reflect his interdisciplinary view of research.

The blood that Kamath pedaled back from MGH helped in an exciting discovery about circulating tumor cells, which move through the blood in very low numbers, making them difficult to capture: He determined that a method of capturing these cells, developed in the lab where he was working, was as good as the method approved by the Food and Drug Administration. The experience showed Kamath that you don’t need a PhD to make a significant discovery.

“It’s democratic in that anybody can really push forward and make these discoveries,” Kamath says, “as long as they have the knowledge base, the intuition, and the drive.”

Kamath first experienced MIT the summer before his senior year of high school, at Thomas Jefferson High School for Science and Technology in Alexandria, Virginia. That summer, he spent two weeks at the Institute, working in a cancer-modeling lab where he is now working on his master's degree. The experience not only put MIT on his radar, but also sparked what has become a long-term interest in cancer research.

Kamath is working with William Thilly, a professor of biological engineering at MIT, and research scientist Elena Gostjeva in the new field of metakaryotic biology. Gostjeva discovered the metakaryotic stem cells, which create organs during fetal and juvenile growth, but later serve as the generative stem cells for pathologic lesions including tumors and atherosclerotic plaques. These cells also have peculiarities including X-ray resistance, not using mitosis to divide, and organizing their genomes in a set of circular structures instead of in linear chromosomes.

Kamath describes a cancer-modeling paper he co-authored that combined data from lab experiments on cancerous mutations in colonic stem cells with a large database of cancer mortality statistics. “I think that’s a very strong interdisciplinary effort because it does modeling of epidemiology from a huge perspective and then it also goes down into the very, very small single-cell level in the lab,” Kamath says.

Kamath turns to his mentor for advice on everything from experimental design to medical school applications, and he has adopted Thilly’s interdisciplinary approach. Kamath’s current work tests drugs that could be inhibitors of genome-doubling  metakaryotic cancer stem cells. He is testing inhibitors of a specific DNA polymerase used in metakaryotic stem cells but not needed in the mitotic eukaryotic cells generally studied in human biology.

Kamath is now applying to MD/PhD programs, and would ultimately like to run a lab in a research hospital, so he can use the knowledge gained working with patients to inform experiments on new therapies. “There’s this yawning gap between the clinic and the lab bench, which can be bridged by those in an MD/PhD program, and I think it’s really where I want to start out as a career,” Kamath says.

Kamath’s interdisciplinary approach also applies to other areas of his life. He began writing for MIT’s student newspaper, The Tech, during his freshman year; during his senior year, he served as executive editor. Kamath says he is proud of stories the paper produced on difficult topics, such as mental health and sexual assault, during his tenure.

Kamath also spent a summer working on health care policy in U.S. Rep. Paul Ryan’s office as part of the MIT Washington Summer Internship Program. The experience provided him with insight into health care funding — and showed him that bipartisan compromise occurs much more often than he had realized. “I don’t think I will ultimately work in policy, but it is a good perspective,” Kamath says.

As a graduate student, Kamath devotes time to mentoring undergraduates in biological engineering — which he sees as an important role for any scientist. “Advising and mentoring … is very high-impact, and it’s something most scientists should try to do in their career, because they can help bring up a new generation,” he says.

Mapping the 3-D structure of DNA

Bringing biochemistry to life with color