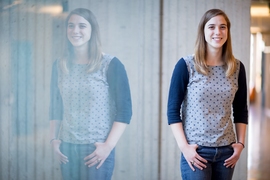 The West African nation of Togo is not a vacation destination for many Americans, but it’s where senior Kristen Finney, a chemical engineering major and co-president of MIT GlobeMed, spent a summer and a winter break working with a local HIV/AIDS clinic to improve its community health worker program.

“Togo is consistently ranked one of the 10 poorest countries in the world,” Finney says. “It’s not necessarily a fair and open democracy, and for that reason the United States and many European governments refuse to give any aid to Togo specifically, so Ghana, the country right next door, gets eight times the health care aid that Togo does.”

Finney’s involvement in GlobeMed stems partly from her own experience in high school. At age 16, while swimming competitively, Finney noticed shortness of breath that sent her to the doctor, where she was diagnosed with a congenital heart defect that required surgery.

“I had this $90,000 surgery in the end, and my family was completely financially unaffected because we had the insurance we did,” Finney says. “That really resonated with me, the amount that this could have changed my life, and didn’t, and what a small fraction of the world can say that.”

Finney fully recovered from the surgery, and continued swimming competitively — even on the varsity team for her first two years at MIT — but the experience shifted her perspective. She began to think about places where health care is not as readily available, and where it is difficult for people to afford even basic medical treatment.

During her first year at the Institute, Finney became involved in the MIT chapter of GlobeMed, a national organization that partners college chapters with grassroots organizations around the world. GlobeMed at MIT works with Hope Through Help, a group that supports HIV/AIDS clinics in Kara, Togo. Finney joined the executive board of GlobeMed at MIT during the spring of her freshman year.

“The GlobeMed model is based on having a long-term partnership with one organization rather than moving from one to the other, the idea being that we want their feedback in terms of what we’re doing,” Finney says. GlobeMed at MIT is now in its fourth year of working with an HIV/AIDS clinic in Kara.

Each year, GlobeMed at MIT raises about $10,000 to stock the clinic’s pharmacy with antibiotics and other medications, and holds an educational conference that focuses on a different aspect of medicine and health care.

Members of GlobeMed at MIT visit the clinic in Togo every summer and Independent Activities Period (IAP), or winter break; Finney made her first trip the summer before her junior year. She was particularly affected by a visit to a local hospital where AIDS patients too sick to be treated by the clinic were suffering — many of them rejected by their families and lacking medical supplies, which have to purchased at a market outside the hospital.

“Actually seeing it was an incredibly troubling thing,” Finney says. “I was appalled by the injustice of this thing happening. If these people had been in the United States, a treatment exists, it would’ve been there immediately.”

Over the past few years, GlobeMed at MIT has worked to improve implementation of the existing community health worker program at the HIV/AIDS clinic in Kara. “They have members of the local community that are paid by the clinic to go out and visit patients in their homes to check on how they’re doing, make sure their medications are right, report back any symptoms they still have that might need attention,” Finney says.

GlobeMed at MIT developed a system to standardize the visits, with each community health worker supplied with a smartphone loaded with a digital form. The form asks questions to guide the worker through the visit, and records the answers. It also provides medical advice based on patients’ answers, which means that the community health workers, who are not nurses or doctors, can easily access additional medical content. The workers can then upload information to a database, using the clinic’s Wi-Fi.

While community health workers and patients in Togo were initially enthusiastic about the forms, unanticipated roadblocks cropped up during field testing: Unreliable Wi-Fi would freeze if too many phones were uploading data, and some medical staff at the clinic lacked the training to access the uploaded data. Some community health workers struggled to keep their phones charged because they don’t have electricity at home — which is fairly common in Togo. In fact, Finney says, local students visit the clinic after dark to do their homework, since the clinic’s lights remain on all night.

GlobeMed at MIT put together a series of recommendations after their trip; ultimately the clinic hired a part-time technical support staffer to assist. Finney hopes to return to Togo this winter, and GlobeMed at MIT will continue to work with the clinic until it no longer needs the group’s skills.

Finney’s courses in chemical engineering may not tie directly to her involvement with GlobeMed, but she finds the problem-solving associated with her field to be applicable to her work with the group. In particular, she recognizes how both spheres require making educated guesses, and constructing approximations without having complete information.

After graduating from MIT next June, Finney hopes to continue working with grassroots organizations, and plans eventually to pursue a master’s in public health. She credits her time at MIT with helping her find her path.

“I would say my experience with my own heart issue was the catalyst for changing my ideas, but at the same time it certainly hasn’t been all of it,” she says. “It started out my passion for the field, but that has grown and developed throughout my MIT career. I feel like I’ve refined my opinions on these topics a lot through discussion and through thinking critically about these issues.”