Mapping the 3-D structure of DNA 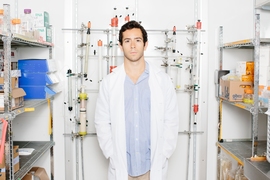 For graduate student Abe Weintraub, the magic and intrigue of DNA is all in the packaging.

Imagine trying to fit 24 miles of string into a tennis ball, the PhD student in biology says: That is, in essence, what it’s like inside every cell nucleus in the human body, each of which contains about 2 meters’ worth of DNA strands. But, as Weintraub is finding, this packaging sometimes goes awry, which may be the basis for disease.

Although the genetic code that resides in DNA has traditionally been thought of as linear, Weintraub is contributing to a body of knowledge about its 3-D organization. Two genes that may exist far apart when a strand is stretched out straight could actually be right next to each other when the strand is folded inside a cell nucleus — and the same applies to regulatory elements, which tell genes to turn on or off.

Looking at DNA as a 3-D phenomenon may yield insights about how certain genes get turned on or off, and thus how cells differentiate — in other words, DNA’s 3-D structure might actually be what’s behind one cell becoming a skin cell, while another becomes a lung cell.

Weintraub has now been part of the lab of Richard Young, a professor of biology, for one and a half years; his research began in figuring out how DNA gets folded up the way it does, and has more recently shifted to the consequences of improper folding.

DNA gets packed tightly in organized loops, rather than being haphazardly crammed into cell nuclei. Weintraub helped find what causes this ordered looping.

“When we zoomed out, we could see that what creates the particular 3-D structure of DNA are basically large loops, constraining small loops. Science can be pretty meta,” Weintraub jokes.

This looping system looks fairly consistent across cells, and is how the same genes and regulatory elements end up adjacent to each other in every skin cell, for example. To study the 3-D structure of DNA, Weintraub works with mouse embryonic stem cells. He is now working on assembling maps that show normal patterns and gene organization across different types of healthy cells.

While there is a general consistency to DNA’s 3-D structure, Weintraub also noticed variations as he worked to create these maps. He began to wonder whether DNA’s packaging affects its functionality, beyond just allowing it to fit inside a nucleus. So he shifted his research slightly, and now focuses on how slight changes in the way that DNA strands are folded can cause serious problems, like cancer.

“That’s a disease that primarily affects children,” Weintraub says. “So it keeps me motivated in my research.”

Outside of the lab, his research also resonates with physicians at Massachusetts General Hospital and Boston Children’s Hospital, grounding this aspect of his work in therapeutic discovery — although Weintraub remains staunchly connected to the importance of basic science, too.

“It’s kind of the best of both research worlds,” he says of his research with DNA, as his project mapping healthy cells’ 3-D DNA structure has broader applications.

For Weintraub, finding his place in the historical context of this field has been interesting. Through reading peer-reviewed journal articles from the 1970s and 1980s, he noticed a number of researchers postulating that DNA had a distinct 3-D structure that affected its functionality, but were unable to prove this hypothesis. With today’s precise technology, he gets to be part of a team that’s finally confirming this notion.

“I like the idea that what I’m doing is identifying principles behind something as central to our biology as DNA,” Weintraub says. “I like that there’s still room for that kind of discovery here.”

While Weintraub grew up and attended college in California, he says he may end up settling in Boston because of the area’s vast resources for biotech research. But with several years left until he completes his PhD, it’s too early to tell whether he’ll choose to go into academia or industry.

“I don’t want to limit myself just yet,” he says. “There’s still a lot to learn.”

Origami: Not just for paper anymore