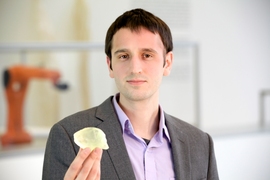 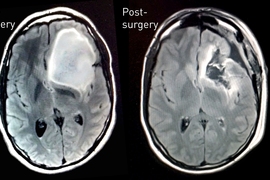 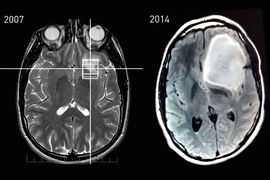 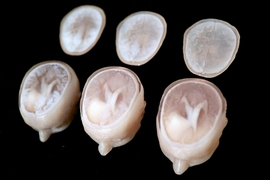 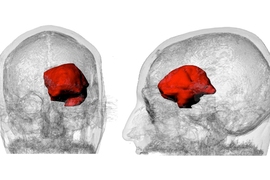 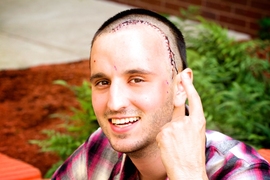 Caption:
Keating was back on the MIT campus three days after his 10-hour awake brain surgery.
Credits:
Courtesy of Steven Keating

In 2007, Steven Keating had his brain scanned out of sheer curiosity.

Keating had joined a research study that included an MRI scan, and he asked that the scan’s raw data be returned to him. The scan revealed only a slight abnormality, near his brain’s smell center, which he was advised to have re-evaluated in a few years. A second scan, in 2010, showed no change, suggesting that the abnormality was most likely benign.

While the second scan provided reassurance, Keating’s knowledge of the abnormality — as a result of having access to the raw data from these scans — ultimately led to the detection of a baseball-sized tumor that was removed this past August.

Now a graduate student in the Department of Mechanical Engineering and based at the MIT Media Lab, Keating says that his curiosity saved his life — and that his experience with cancer has fueled a strong interest in advocating for open health data.

Keating arrived at MIT in fall 2010 as the first student to join the Media Lab’s Mediated Matter Group. Under his advisors — Neri Oxman, the group’s director and the Sony Corporation Career Development Associate Professor of Media Arts and Sciences, and David Wallace, a professor of mechanical engineering and engineering systems — Keating studies digital construction and biologically inspired design. He is pursuing a PhD in mechanical engineering with a minor in synthetic biology.

Last July, Keating noticed that he was experiencing a phantom vinegar smell for about 30 seconds every day. Knowing that his 2007 and 2010 research scans showed an abnormality near his smell center, he requested an MRI scan through MIT Medical. The scan revealed that the abnormality had grown into a tumor that needed to be removed as soon as possible.

Keating went to Brigham and Women’s Hospital (BWH) in Boston on Aug. 19 for surgery, accompanied and supported by his family and his girlfriend; Oxman; and Yoel Fink, a professor of materials science and director of MIT’s Research Laboratory of Electronics. The surgery was performed by neurosurgeon E. Antonio Chiocca, and Keating, though sedated, was kept awake while the tumor was removed. This was so doctors could ask him questions while they were probing and cutting brain tissue to ensure they were not damaging the brain’s language center. The 10-hour surgery was captured on video, which, at Keating’s request, was shared with him.

His recovery was quick: Keating was out of the hospital after two days, and he was back on the MIT campus within a week.

A tissue biopsy confirmed that his tumor was an IDH1-mutant malignant astrocytoma. In this type of brain cancer, which was only first identified by researchers in 2009, the mutated IDH enzyme leads to the production of 2HG, a novel, oncogenic metabolite. Through the Bridge Project — a collaboration between MIT’s Koch Institute for Integrative Cancer Research and the Dana-Farber/Harvard Cancer Center — a cross-institutional research team is exploring how to use 2HG as a biomarker to detect and monitor IDH-mutant cancers.

Ovidiu Andronesi, a radiologist at Massachusetts General Hospital (MGH) and a collaborator on this research, applied this monitoring technology via MRI spectroscopy imaging to scan Keating’s brain before and after his surgery. These scans show the reduction of 2HG after doctors removed the tumor; the scans were also shared with Keating, at his request.

“As a cancer scientist, hearing Steven talk about 2HG spectroscopy screening as part of his clinical care is remarkable,” says Matthew Vander Heiden, the Eisen and Chang Career Development Associate Professor of Biology and a member of the Koch Institute, who is a leader on this research project. “IDH’s role in these cancers was only discovered six years ago, and it is incredible, as well as humbling, that Steven could benefit from some of the basic science done in this short time period since IDH mutations were recognized.”

Diving deeper into the data

Since the surgery, Keating’s curiosity has only become more acute. This has been fueled, in large part, by his close connection with his doctors and the data they were able to provide.

“Because of that connection, I had new options,” he says. “I asked for the surgery to videotaped, for my genome to be sequenced, and for the raw data from scans.”

With this abundance of data, Keating is able to apply his own research interests to develop an intimate understanding of his brain and his tumor. In Oxman’s Mediated Matter Group, Keating’s research explores how to leverage 3-D printing and other fabrication methods to print everything from living organisms to entire buildings. With the resources available to him at the Media Lab, he and colleagues James Weaver and Ahmed Hosny at Harvard University’s Wyss Institute for Biologically Inspired Engineering have pored over his health data and created digital and 3-D-printed models of his tumor, brain, and surgically repaired skull.

“Steven’s story is so inspiring in part because he is approaching his own cancer as a scientific problem, and he is actively seeking the data he needs to solve that problem,” says Tyler Jacks, director of the Koch Institute and the David H. Koch Professor in MIT’s Department of Biology. “After hearing his story, I think all of us were motivated to get back into the lab.”

“Steven’s insatiable curiosity is what science is all about,” adds Nancy Hopkins, a professor emerita of biology, and member of the Koch Institute, who attended both talks. “He addresses even his own cancer as if it were the latest fascinating experiment and as an opportunity to advance knowledge and help others.”

Given his up-close-and-personal experience with his health, Keating says he is now a strong believer in open sourcing and allowing patients to have easy access to their own health data. He says he was fortunate that his doctors were willing to share his data, but he did notice many small barriers along the way.

“My doctors are incredible for sharing my data and encouraging me to learn more from it,” Keating says. “However, the process raised some questions for me, as I received my data on 30 CDs, without easy tools to understand, learn, or share, and there was no genetic data included. Why CDs? Why limited access for patients to their own data? Can we have a simple, standardized share button at the hospital? Where is the Google Maps, Facebook, or Dropbox for health? It needs to be simple, understandable, and easy, as small barriers add up quickly.”

Keating says this cause has personal importance because having access to his health data not only led him to discover his tumor in the first place, but it also helped find the doctors and medical care he needed.

“Imagine having your whole medical record that you could not only share with doctors and scientists but also with friends and family, too,” he says. “Patients could get second opinions very easily, and doctors can follow what leaders in the field are doing.”

He says there are also huge mutual benefits when patients decide to share their health data with researchers, because it provides them with an actual case to study. The same is true when data is shared within patient communities, as those with precisely similar conditions are able to connect with one another.

Critics of open-source health data largely point to privacy considerations. This is especially true with regard to patients’ genetic data, which inherently reveals information about their family members. Many also worry about patients making medical decisions based on their own interpretation, against the advice of doctors. Furthermore, people say doctors might second-guess every one of their decisions to the point where the standard of care would decrease.

While Keating recognizes and respects these concerns, he says that the landscape of health care is changing — mentioning the rise of wearable technologies that collect personal health data, such as smart watches, as an example.

“I’m a strong believer in privacy, but if a patient wants to share, they should be able to,” he says. “Your personal being is your personal property, and you should have the right to share that data if you want to.”

This is an area where Keating is leading by example. He has open-sourced his health data on his personal website, where his MRI scans and tumor model are available for download, and he has been meeting with government and hospital officials and leaders in the open-source health data field. He also has been exploring how links can be made between hospitals and open patient data repositories, such as Sage Bionetworks, the Personal Genome Project, Cancer Commons, and Patients Like Me.

As a result of his advocacy for open-health data, the White House invited Keating to President Barack Obama’s unveiling of the Precision Medicine Initiative in January. Obama's proposal calls for increased federal investment in patient-powered research that accounts for individual differences in genes, environments, and lifestyles. One of the initiative’s primary objectives is accelerating design and testing of tailored cancer treatments through the National Cancer Institute.

Having completed proton therapy at MGH with radiation oncologist Helen Shih, Keating is now undergoing chemotherapy at BWH. All the while, his spirits remain high.

In an email he sent his friends and family before his surgery, Keating described life as a “wild ride.” However, as wild as it can be, he says that being an MIT student armed with data and a sense of curiosity can make all the difference.

Boston.com reporter Dialynn Dwyer writes about how graduate student Steven Keating “fought his cancer with curiosity.” Dwyer explains that Keating “gathered his health data in order to understand the science behind what his body was going through” and even filmed his brain surgery.

BetaBoston reporter Nidhi Subbaraman writes about how graduate student Steven Keating's thirst for knowledge may have saved his life. After experiencing phantom odors, Keating urged his doctors to perform a brain scan, which revealed a tumor. Since then, Keating has “open-sourced” his illness, and become a “champion of a movement to provide patients with more information about their health.”

Steve Lohr of The New York Times writes about how allowing patients like brain cancer survivor and MIT graduate student Steven Keating greater access to their medical records can not only improve patient health, but also benefit medical research. The sharing of medical records could be a “huge crowdsourcing opportunity for research,” Keating explains.

In a New York Times article, Steve Lohr spotlights how graduate student Steven Keating’s active participation in his medical care led to early detection of a brain tumor. In describing patient access to medical records, Keating explains his belief that “data can heal.”