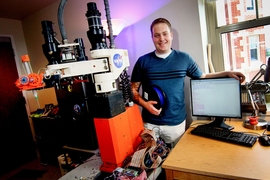 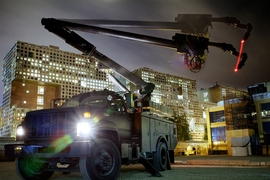 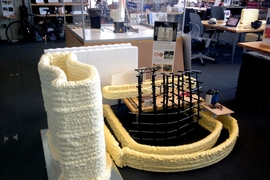 ↓ Download Image
Caption: A 3-D-printed model made of polyurethane and reinforcements is displayed at the Mediated Matter Group at MIT Media Lab.
Credits: Photo: Steven Keating 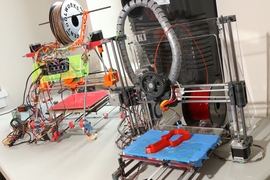 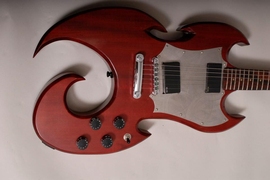 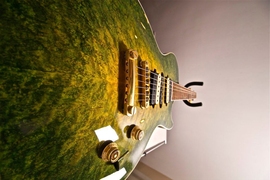 When an aspiring mechanical engineer on a budget wants a top-of-the-line guitar, what does he do? He makes it himself, of course.

At age 13, Nathan Spielberg — now an MIT senior — began building his first guitar, a process that consumed his attention for eight hours a day, every weekend, for 3 1/2 years. Reminiscing now, he calls it a full-time hobby, but it was also pure inspiration: Strumming away on what was once a mere block of wood, Spielberg grew to appreciate the potential to turn an abstract idea into a functional object.

As a mechanical engineering major at MIT, he has held onto this tenet, but turned his attention to a new means of production: 3-D printing. Until recently, Spielberg worked in the MIT Media Lab with Neri Oxman, the Sony Corporation Career Development Assistant Professor of Media Arts and Sciences, graduate students Steven Keating and John Klein, and other undergraduates. As part of the Mediated Matter Group, he focused on converting a robotic arm to a computer controlled arm, capable of printing projects, like houses.

As Spielberg sees it, 3-D printing has two extremes: At one end is rapid prototyping, which allows researchers to design, print, and experiment — and then design, print, and experiment again — many times faster than traditional manufacturing. On the other end is express, large-scale construction of single objects. That’s where his research with Oxman, Keating, and the others comes in.

Ordinarily, 3-D printing occurs inside a box — limiting the size of printable objects to that of the printer’s housing. But in the Media Lab, Spielberg and his colleagues thought outside the box: They researched and implemented methods for controlling a large robotic arm — out of that from a boom truck, used to fixed power lines — that would be able to maneuver back and forth, printing objects as large as walls, layer by layer.

It’s analogous to how an office printer’s cartridge runs back and forth, but on a much grander scale: An aim of the group's research was not only to print walls, but to do so with considerable mobility, enabling immediate transport to a construction site, streamlining delivery and increasing construction efficiency.

The printed object, in this case, is actually a mold made of insulation that becomes a full-on wall once filled with concrete. Being made of insulation, however, the molds have their own functionality beyond providing the external shape for a wall: They don’t have to be removed once the concrete is poured, since they can act as embedded insulation for the house.

Because of the scale of the work, Spielberg and Keating encountered some obstacles. For instance, Spielberg says, “You need really precise movement on the robotic arm end to get each layer exactly straight, and to build something that looks like a functional house, which is really hard to do with a construction crane. If you’ve ever seen someone working on the power lines, they’re usually swaying in the wind. There are a lot of inherent engineering and physics problems with this that we’re trying to solve.”

A Digital Construction Platform consists of a boom truck system repurposed for the 3D-printing of buildings.
Photo: Steven Keating

A 3-D-printed model made of polyurethane and reinforcements is displayed at the Mediated Matter Group at MIT Media Lab.
Photo: Steven Keating

From walls to nanoscale chips

This fall, Spielberg jumped to the other end of the 3-D printing spectrum, moving from walls to nanoscale fluidic chips. He is now working in the lab of A. John Hart, the Mitsui Career Development Associate Professor of Mechanical Engineering, to manufacture what’s known as a “lab on a chip.”

Currently, when a doctor wants to run a series of blood tests on a patient, he or she collects several vials of blood and sends them to a hospital laboratory for dozens of individual tests. Several hours or days later, the lab returns the results.

Among other functions, a lab on a chip can theoretically take a minuscule sample of blood, run all of the required tests at once inside tiny channels embedded in the chip, and produce nearly instantaneous results. Spielberg even sees the technology as a potential tool in military environments.

“It’s totally a convenience thing,” he says. “Imagine if you were in the military and you’re trying to screen for some disease, but you don’t have a lab with you. You can pull out this device, take a quick sample of blood, get almost instant feedback in a super-small form, and be on your way.”

Once again, Spielberg’s role in the lab is with optimizing the 3-D printer that makes the device. The current method for creating labs on a chip is labor-intensive, and, much like manufacturing a standard computer chip, starts with creating silicon wafers, which act as a template for the final product.

Even though he is only a few months into his new lab position with Hart, Spielberg is already working toward eliminating this clunky process, enabling the same type of efficient manufacturing he tackled at the Media Lab.

An early introduction to research

Growing up in Louisville, Ky., Spielberg first encountered the power of research when his 11-year-old brother was diagnosed with dystonia, a neurological disorder characterized by uncontrollable muscle contractions.

“He started limping, and progressively couldn’t walk to the point where he was bedridden,” Spielberg says. “Throughout that process, it was really hard because there’s not a lot you can do. One of the hardest things is feeling helpless.”

But Spielberg broke through the helplessness: Piggybacking on the fundraising bracelet trend of a few years ago, he sold silicone bracelets, raising $60,000 to fund research on his brother’s disease. Then, as a high-school student, Spielberg became involved in some of the research his fundraising supported; the experience provided a perspective unlike what he already knew from designing guitars.

“I didn’t do a ton of hands-on stuff,” he says, “but it was really interesting to learn about how they were trying to solve this problem from a biological standpoint, because I was more used to solving problems from a mechanical standpoint.”

The story ultimately had a happy ending: Spielberg’s brother enrolled in a clinical trial, receiving pacemaker implants in his chest that could intercept aberrant signals from his brain before they reached his muscles. His brother can now walk almost perfectly, and can even play basketball with his friends.

“That was, and is, so amazing to me — that research has the potential to totally give a person their life back,” Spielberg says.

And as for the homemade guitar? Spielberg says he left it in Louisville for safekeeping. Nonetheless, he’s a member of a recently formed rock band with a fellow mechanical engineering major and two computer science majors, keeping music and science tied together in his life.

“There’s something about art and music that offer a form of self-expression that’s sometimes hard to attain in other forms of work,” Spielberg says.