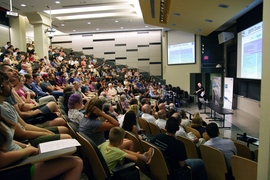 ↓ Download Image
Caption: Before a packed audience in MIT’s Huntington Hall, professor of planetary sciences Richard Binzel described the intense timeline of activity surrounding the New Horizons mission's close approach to Pluto in July, after more than nine years of travel time to the outskirts of the solar system.
Credits: Photo: Helen Hill 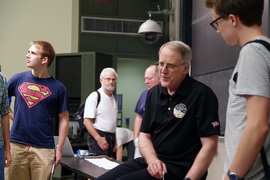 ↓ Download Image
Caption: Binzel, who is a member of the science team for the New Horizons mission to the Kuiper Belt, talks with audience members after his talk about the mission.
Credits: Photo: Helen Hill

Caption:
Before a packed audience in MIT’s Huntington Hall, professor of planetary sciences Richard Binzel described the intense timeline of activity surrounding the New Horizons mission's close approach to Pluto in July, after more than nine years of travel time to the outskirts of the solar system.
Credits:
Photo: Helen Hill

Caption:
Binzel, who is a member of the science team for the New Horizons mission to the Kuiper Belt, talks with audience members after his talk about the mission.
Credits:
Photo: Helen Hill

It took nearly a decade of high-speed travel for NASA’s New Horizons mission to cross the 6 billion miles to the dwarf planet Pluto — and before that, many years of painstaking research and planning to make the mission possible.

Having spent much of his career working toward that epochal moment, MIT professor of planetary sciences Richard Binzel had some pithy words of advice for students in the field at a talk Wednesday afternoon: “Start young!”

Not that the nine years of New Horizons’ travel was spent sitting around and waiting; on the contrary, there were important observations and course adjustments along the way. The last several months before the flyby were marked by a crescendo of activities and observations using the craft’s cameras and instruments.

The results, which will take a year to finish sending back to Earth and many years to fully analyze, have already yielded significant surprises, Binzel said in his talk describing the mission — as well as how much has been learned about Pluto since its discovery in 1930.

Back then, Pluto was nothing more than a faint speck of light discovered by astronomer Clyde Tombaugh, who spent years poring over glass-plate photographs of stars, looking for signs of something whose position changed over time. Binzel met Tombaugh early in his career, and included a photo in his presentation.

As a graduate student, Binzel played a part in one the most important discoveries about Pluto: In 1978, he was part of a team that analyzed images of Pluto, taken from Earth, that appeared to show a small bump on the planet’s side. That bump turned out to be its largest moon, now called Charon.

Binzel said that at two different times in Pluto’s 248-year orbit, for a period of a few years, Charon crosses in front of or behind the planet, providing a way to map features on the planet’s surface by observing fluctuations in its brightness. Amazingly, since these episodes occur only every 124 years, one such episode happened within a few years of Charon’s discovery — and Binzel carried out repeated observations, month after month, in hopes of detecting it. It took several years, but eventually those crossings, known as transits, did show up, enabling the first-ever mapping of features on Pluto’s surface.

That initial mapping, when lined up against the latest high-resolution images returned from New Horizons, proved remarkably accurate, Binzel said on Wednesday.

In addition to his participation as a co-investigator on the New Horizons team, Binzel pointed out a number of other important MIT contributions to this mission, and to research on Pluto in general. For instance, he said, James Elliot, an MIT professor of planetary astronomy who died in 2011, was a pioneer in the use of stellar occultations to detect and measure atmospheres of distant solar system bodies.

But by 1989, Binzel said, the best available telescopes and instruments had reached a dead end in studying Pluto from Earth. “To know more, we had to go there,” he said — and that’s when discussions began about designing a spacecraft to view Pluto up close. Six proposals were rejected before the New Horizons mission was accepted, built, and launched — and 26 years later, those efforts have finally borne fruit.

MIT played another important role just this year, providing an opportunity for Earth-based observations of Pluto in close coordination with the New Horizons flyby. It turned out there was an occultation of a star by Pluto within a few days of the craft’s closest approach, and a team including MIT lecturer Amanda Bosh and research scientist Michael Person led observations that enabled scientists to observe details of the composition and dynamics of Pluto’s atmosphere.

Many things could have gone wrong with the New Horizons mission: At the craft’s speed of 20 kilometers per second, “even a grain of rice would destroy your spacecraft,” Binzel said. But the craft survived the flyby and gathered reams of data, and it is now heading toward its next encounter — with a smaller chunk of ice, a Kuiper Belt object known as 2014 MU69, that it will pass in 2019.

As it hurtles into the depths of space, New Horizons also carries a small bit of history, Binzel said: Some of Tombaugh’s ashes were included in its payload, bringing a bit of him along to the small world that he found in 1930.

As for New Horizons’ long-term significance, Binzel said, the scientists involved hope that the successful mission — whose popularity during the flyby produced the heaviest traffic ever experienced by NASA’s website, causing it to crash briefly — could be an “Apollo moment” for a new generation, triggering a surge of interest in science and technology.