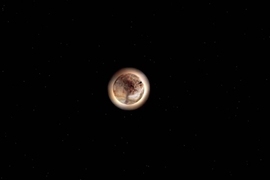 As NASA’s New Horizons spacecraft closes in on Pluto — scheduled to make its closest approach on July 14 — another mission much closer to Earth has caught sight of the dwarf planet’s shadow: On June 29, SOFIA (Stratospheric Observatory For Infrared Astronomy), a high-altitude NASA plane carrying a 100-inch-diameter telescope, raced over New Zealand to catch a stellar occultation — a rare celestial alignment in which Pluto passes directly between Earth and a distant star, casting a faint shadow on Earth. The way in which Pluto blocks starlight may tell scientists about the dwarf planet’s atmospheric composition.

Michael Person, a research scientist in MIT’s Department of Earth, Atmospheric and Planetary Sciences (EAPS), was aboard SOFIA, monitoring its telescope for signs of the occultation; Amanda Bosh, a lecturer in EAPS, was part of a team in Arizona that was triangulating the planetary and stellar positions. Bosh and Person spoke with MIT News about efforts on the ground, and in the air, to put the plane in the right place at the right time.

Q: It sounds like this mission was quite a thrill ride. Can you lay out for us the key moments that ultimately led to catching Pluto’s shadow?

Person: To begin, the whole flight was almost scrubbed, because on the afternoon before the event, wind picked up suddenly and caused the lift truck to bang against the aircraft. Thankfully, the damage was not severe enough to scrub the flight.

Bosh: We identified this occultation more than a year earlier and have been continually measuring the positions of Pluto and the star to update the prediction: Where was the shadow going to fall? Pluto is smaller than the Earth, and so its shadow covers only a small portion of the Earth. We would need to get into that shadow zone if we wanted to see this event. In the two weeks leading up to the occultation, we had been observing Pluto every night with a variety of telescopes.

Person: We had a six-hour test flight the night before, to test out all the instruments and to give the flight crew practice in hitting a particular spot at a particular time.

Bosh: While back in Flagstaff, we continued to measure Pluto’s position as it moved against the background stars, update the prediction, and send that information to SOFIA’s flight planners.

Person: We had been carefully monitoring and updating the ground track prediction for months, so we had a pretty good feel for it. Each time we updated the predicted shadow position, the flight planners would make a new flight plan for SOFIA that would fly us precisely through the center of the shadow at the moment it was to pass overhead.

Bosh: Our goal was to put SOFIA as close to the center of the shadow as possible. When you’re at the exact geometric center of the shadow, you can witness a brightening of the star, while it’s still behind the planet, that occurs as the entire atmosphere bends and focuses the starlight. This is the Holy Grail for occultation observers, because it allows us to see what’s happening at the lowest levels of the atmosphere that are not normally accessible to stellar occultations.

We were certain that we could get SOFIA into Pluto’s shadow, but could we get it into the tiny central flash zone? We were determined to try; we analyzed data all night before the event, and had in place a plan to call and email to SOFIA while they were already in flight, with a last-minute course correction.

Person: About five hours before the event, we received Amanda’s message that the final prediction update was 227 kilometers north of the previous prediction. This was much larger than we had been expecting — but we decided to trust our procedures, and more importantly, trust our colleagues on the ground, so the flight crew scrambled to change our flight plan and get us to the correct place at the correct time.

Q: What were you able to see as Pluto crossed the star?

Person: Each of the three camera teams was gathered around their own monitors watching the star in real time. There were several tense minutes just before the event as the star just sat there, doing nothing. Suddenly there was a murmur you could hear throughout the plane as everyone started saying, “There it is! It’s happening!”

Right before my eyes, the star started fading away as its light was bent and spread out by Pluto’s atmosphere. It started clearly brighter than the star next to it, and over the course of a few seconds, it went down to clearly dimmer as only Pluto’s light remained. Suddenly, it brightened up briefly just for a few seconds before fading back to its dimmest. … We had passed right through the center of the shadow.

Q: What can you tell about Pluto so far from SOFIA’s measurements, and how will the data fit in with those obtained from New Horizons?

Person: For years, since Pluto’s atmosphere was first measured in 1988, it’s been theorized that as Pluto gets further and further away from the sun and thus gets colder, its atmosphere will shrink and in fact eventually freeze out entirely and sit on the surface as ice. Our measurement shows that this clearly isn’t happening yet, and many of these models predict that it should’ve begun happening already. So each successful observation forces us to re-evaluate how we think Pluto’s atmosphere interacts with its surface, and whether some other mechanism is going to continue supporting the atmosphere even as the planet gets colder.

Bosh: Combining the SOFIA measurements with our various ground-based observations allows us to precisely determine where the shadow went, and verify our prediction procedures for future events. We’ll also learn how large the atmosphere is currently, and a host of other data, such as pressure and temperature profiles.

Person: New Horizons will also be making occultation measurements of Pluto’s atmosphere, using both ultraviolet light and radio waves. We made our measurements in visible and infrared light. When you observe this sort of event, the wavelength of light you use determines the altitude in the atmosphere that you see. New Horizons will measure the atmosphere both higher up and nearer to the surface than we will, with our visible and [infrared] data neatly bridging the gap between them. Combining all of these results will let us create temperature and pressure profiles for Pluto’s atmosphere from near the very top all the way down to the surface. So the complementary wavelengths of our various occultations actually make the SOFIA and New Horizons data sets work very well together.

MIT research scientist Michael Person and lecturer Amanda Bosh were part of a NASA project to examine Pluto’s shadow during a stellar occultation. Govert Schilling reports on the team’s work for New Scientist, writing that the goal was to learn about the pressure and temperature in Pluto's atmosphere.