Caption:
New Horizons discovered flowing ices in Pluto’s heart-shaped feature. Swirl patterns of light and dark suggest a surface layer of exotic ices has flowed around obstacles and into depressions, much like glaciers on Earth.
Credits:
Image: SwRI/JHUAPL/NASA

Pluto wears its heart on its sleeve, and that has scientists gleaning intriguing new facts about its geology and climate. Recent data from NASA’s New Horizons probe — which passed within 7,800 miles of the surface on July 14 — have revealed striking features on Pluto's heart-shaped region that indicate the icy dwarf planet may harbor an ocean deep in its interior, according to mission scientists during a July 24 press briefing. They also provided new information about Pluto's thin atmosphere.

“We are amazed to see Pluto as dynamic and active as it is,” said Richard Binzel, a New Horizons co-investigator and professor in MIT’s Department of Earth, Atmospheric, and Planetary Sciences. The latest images of Tombaugh Regio — the heart's official name in honor of Pluto's discoverer, Clyde Tombaugh — show evidence of nitrogen ice similar to Earth’s glaciers, which appear to flow around elevated islands at the heart’s edges. Until now, scientists have only seen surfaces like this on active worlds such as Earth and Saturn's moon Enceladus. “No one dared imagine such a thick and localized buildup of geologically young ices, that even at 40 kelvins [-388 degrees Fahrenheit], have enough viscosity to create local landforms,” he said.

Flowing ice and other previously revealed features, such as 11,000-foot water ice mountains and the heart’s relatively young crater-free surface, support the idea that Pluto may have an interior ocean driving the geologic activity. 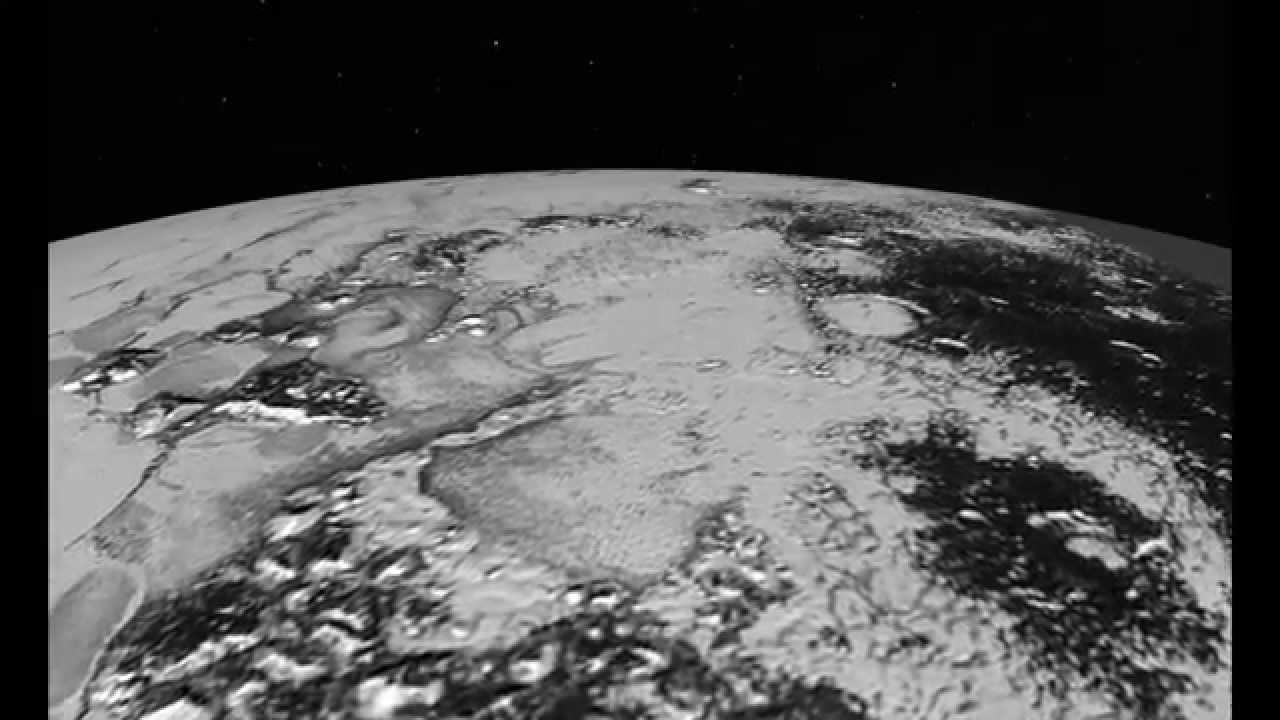 Play video
This simulated flyover of two regions on Pluto, northwestern Sputnik Planum and Hillary Montes, was created from New Horizons close-approach images. The images were acquired by the Long Range Reconnaissance Imager (LORRI) on July 14 from a distance of 48,000 miles. Features as small as one-half mile across are visible.

“All of the activity we see is consistent with the idea that [Pluto] has a massive rock core surrounded by an icy shell,” said William McKinnon, a New Horizons co-investigator at Washington University in St. Louis. “It increases the probability that there may still be an ocean underneath the thick layer of ice.” The researchers emphasized they don’t have any direct evidence for an interior liquid ocean, but will investigate the possibility as data continue to trickle in over the next 16 months. In any case, “things are looking good for Pluto,” McKinnon said.

He wasn’t kidding. A stunning image of Pluto released during the press conference shows the dwarf planet in silhouette surrounded by a hazy halo of light. “My jaw was on the ground when I saw this first image of an alien atmosphere in the Kuiper Belt,” said mission leader Alan Stern of the Southwest Research Institute. “It reminds us that exploration brings us more than just incredible discoveries — it brings incredible beauty.”

The haze extends at least 80 miles above the surface — five times farther than predicted — confirming Pluto’s atmosphere, which, according to surface pressure measurements, has decreased by half over the last two years. But where has it gone?

Michael Summers, a New Horizons scientist at George Mason University, explained that when methane gas in the atmosphere is exposed to ultraviolet light from the sun, it transforms into heavier hydrocarbon gasses that fall to lower, colder parts of Pluto’s atmosphere and form ice particles. The particles form a haze, which, when exposed to ultraviolet light yet again, are turned into red organic molecules that fall to the ground, forming the dwarf planet’s dark patches. “We think this is how Pluto’s surface got its reddish hue,” Summers said.

So far, only 4 to 5 percent of the data collected by the New Horizons probe during its flyby have beamed back to Earth. NASA will release additional images and information in September. The probe is currently 7.6 million miles beyond Pluto flying deeper into the Kuiper Belt, and will continue sending data through late 2016.