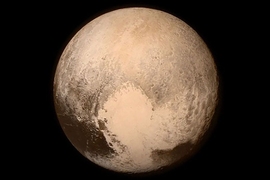 ↓ Download Image
Caption: NASA’s New Horizons spacecraft has revealed the first-ever close up images and scientific observations of distant Pluto and its system of large and small moons. 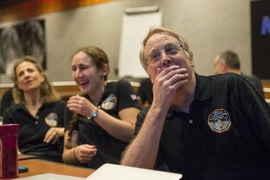 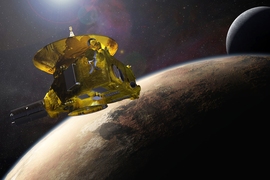 ↓ Download Image
Caption: NASA’s New Horizons spacecraft has revealed the first-ever close up images and scientific observations of distant Pluto and its system of large and small moons.

Caption:
NASA’s New Horizons spacecraft has revealed the first-ever close up images and scientific observations of distant Pluto and its system of large and small moons.

Caption:
NASA’s New Horizons spacecraft has revealed the first-ever close up images and scientific observations of distant Pluto and its system of large and small moons.

On Jan. 19, 2006, NASA launched a space probe the size of a golf cart on a mission to explore the farthest reaches of the solar system; its destination was the Kuiper Belt, a frigid region beyond the planets, populated with icy bodies, the largest of which is Pluto. Traveling faster than any probe before it, the New Horizons spacecraft glanced past Jupiter in 2007, using the massive planet’s gravity to slingshot the probe toward Pluto. Today, after a nine-and-a-half-year journey, New Horizons made its closest approach to the dwarf planet, passing within 7,767 miles — about the distance from Boston to Johannesburg. The probe’s images of Pluto, taken at a resolution that surpasses that of the Hubble Space Telescope, reveal an icy, and surprisingly complex, world.

Richard Binzel, a New Horizons mission co-investigator and a professor in MIT’s Department of Earth, Atmospheric and Planetary Sciences, spoke with MIT News about the probe’s unprecedented view of Pluto, and how the new images may shed light on planetary formation in an “unimaginable cold realm.”

Q: What are your initial impressions of our closest encounter with Pluto?

A: We sent this mission to Pluto thinking we would be surprised and amazed. Pluto and New Horizons have delivered! I have been studying Pluto for 35 years using telescopes on Earth. From these observations, we deduced that Pluto has dark and bright regions, but I never imagined it would be revealed in so much complexity and variety on this frozen world 5 billion kilometers away.

Pluto seems to be experiencing seasons that carve out quite different regions of frozen nitrogen and methane on its surface. Pluto’s moon Charon looks quite different from Pluto, more heavily cratered, with water ice as its top layer. Right now we are only at the stage of describing what we see, with interpretations to follow.

Q: Today marks the conclusion of a nine-and-a-half-year journey to Pluto. Can you give us an idea of what that journey was like for New Horizons as it made its way across the solar system?

A: Funny as it may seem, there has been scarcely a dull moment, as this mission has required a painstaking effort to work out all the details for getting the maximum amount of science from the encounter. Few people realize we have been collecting data for about six months before the date of closest encounter. At the same time we have been thinking about performing the science measurements, we have also been preparing the spacecraft to be autonomous and ready for anything that might occur during the most critical moments.

That hard work has paid off with our healthy New Horizons spacecraft delivering the data when there was no second chance. But now we have reached that “unreachable” far frontier. Two centuries ago, that far frontier was the Lewis and Clark expedition across the continent. Today, we have reached across the solar system: Pluto in view! O! The joy!

Q: With this fly-by, what will New Horizons be able to tell us about the dwarf planet that wasn’t possible before?

A: We are finally grasping detailed information on how planetary worlds form and evolve in this almost unimaginable cold realm, below 100 kelvins [-280 degrees Fahrenheit]. On Pluto, we are seeing how a planetary surface and atmosphere interact when the main constituents are nitrogen and methane.

We were uncertain whether this interaction, with freezing and vaporization, would create a smooth surface or one with complex landforms. The complexity wins!

We are also thrilled to have detailed, up-close measurements of Pluto’s atmospheric properties and the ability to directly link them with what has been monitored from Earth for decades. After these few moments of celebration, we will be back to work on all the new puzzle pieces that the New Horizons data stream is delivering to us.

Felicia Gans writes for The Boston Globe that the images and information gathered by NASA’s New Horizons spacecraft has changed the way that Prof. Richard Binzel and other scientists think about Pluto. “We had expected to be surprised by what Pluto had to offer, but this is beyond anything we imagined,” says Binzel.

CBS Boston reporter Susie Steimie writes about Prof. Richard Binzel’s work as a member of the NASA New Horizons team and his thoughts on the importance of the mission. “We hope by reaching this unreachable frontier that it inspires everyone especially the young kids. We think this is the Apollo moment of our generation,” says Binzel.

Prof. Richard Binzel speaks with WBUR's Doug Tribou about NASA’s New Horizons mission and what it was like to see the first images of Pluto captured by the spacecraft. “It just so exceeded any expectation of what Pluto might look like in terms of its complexity and diversity,” says Binzel.

Los Angeles Times reporter Deborah Netburn speaks with Prof. Richard Binzel about the information being gathered about Pluto by NASA’s New Horizons spacecraft. "We are trying to take these interpretations very slowly and carefully, especially as new and closer data are arriving,” Binzel explains.