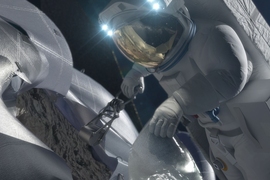 ↓ Download Image
Caption: This concept image shows an astronaut retrieving a sample from the captured asteroid.
Credits: Courtesy of NASA

Caption:
This concept image shows an astronaut retrieving a sample from the captured asteroid.

By the end of this decade, NASA hopes to lasso a space rock: The space agency is actively pursuing proposals for its Asteroid Redirect Mission (ARM) — a mission that aims to identify, capture, and redirect an asteroid into lunar orbit. Astronauts might then visit the rock to collect and bring back samples — pieces that would presumably hold remnants of the early solar system. ARM has been touted as a steppingstone toward the ultimate goal of sending humans to Mars: The mission would advance technologies and spaceflight experience needed for humans to colonize the Red Planet.

However, ARM may be a misstep for NASA, according to Richard Binzel, an MIT professor of planetary sciences. In a commentary published today in the journal Nature, Binzel argues that capturing a faraway asteroid is unnecessary and wasteful. Instead, he says, a trove of near-Earth asteroids, in native orbits as close as the moon, may be close enough for astronauts to visit.

Binzel spoke with MIT News about the need for NASA to pursue a more “pragmatic” path to Mars.

Q. How will finding asteroids that are within the reach of human spaceflight help us in ultimately sending humans to Mars?

A. Right now, Mars is too far for us to reach. Yet we need a challenge of somewhere to go when we are ready to take our first steps out of the Earth-moon cradle and become interplanetary travelers. This newly recognized, enormous population of near-Earth asteroids — roughly 10 million of them larger than 10 meters [in diameter] that orbit between Earth and Mars — serve as natural milestones to measure our progressing capability to travel farther and for longer durations.

Most practically, one can conceive that humans will touch the Martian moon Phobos before a later mission to the surface of Mars. The reason for considering Phobos is that landing on Mars requires bringing a return rocket with you. However, Phobos’ low gravity doesn’t require any significant extra propulsion system to come home.

A survey will find a huge number of accessible nearby asteroids. Perhaps a few of these close-by objects will be as large as 100 meters across — a size that provides some meaningful practice for human operations at Phobos.

Q. In your commentary in Nature, you take NASA to task for ARM. In particular, you call the hardware and operations associated with such a mission “dead-end elements with no value for long-duration manned space travel.” Why is this mission such a misstep for NASA?

A. ARM has been widely criticized, and it is the National Research Council that calls these “dead-end elements.” Getting to Mars is all about expanding the distance and duration capability of human spaceflight. Nothing about capturing an asteroid in a baggie, or grabbing an asteroid boulder with an arcade-game claw, has anything to do with the challenge of getting astronauts to Mars.

Some argue that the asteroid-towing system, employing solar-electric propulsion, is important for eventually sending supplies to Mars. I say, if you want to test out a supply system, use solar-electric propulsion to tow supplies in the first place.  Astronaut rendezvous with a rock in a baggie that was towed into lunar orbit is of no benefit to the crew’s safety and well-being.

If, instead, astronauts arrive in a distant lunar orbit and rendezvous with a supply module that has been towed there in advance, they can extend their total mission time. Extended mission time in deep space is exactly the type of expanding capability we need for humans one day reaching Mars.

Bottom line is that asteroid retrieval offers no reasonable direct benefit for a human spaceflight program whose horizon goal is Mars.

Q. You write that NASA “needs to get back on a coherent track toward achieving humankind’s next giant leap in space.” What are some ways NASA can get back on track, in a fiscally attractive manner, that can also lead to a broader future in space exploration?

A. Finding these easy-to-reach interplanetary asteroids passing near the Earth is far more fiscally responsible than an asteroid-retrieval stunt. A survey, even if using space-based satellites, would be a fraction the cost of a multibillion-dollar retrieval mission. Retrieval would get you one asteroid, while a survey would reveal thousands at a fraction of the cost.

I also advocate that NASA open a “grand challenge competition” to select the best possible, most cost-effective survey mission. This competitive process has been done multiple times with great success with NASA’s unmanned planetary probes.

Here’s why a survey gets human spaceflight and public imagination back on track: Imagine actually knowing the exact orbits and basic nature of the 1,000 most accessible asteroids that are 10 meters or larger. I believe that actually seeing those objects “just right there” in Earth’s vicinity, where getting to any one of them takes less propulsion than getting to the lunar surface, is the equivalent of the St. Louis Gateway Arch.

Once we factually know they are there, human capability will be driven to expand to meet them. From a fiscal point of view, we will know exactly what we are aiming for, and thus be able to plan our steppingstones to Mars most directly and cost-effectively. Speaking economically, if commercial viability would actually become true — I am dubious that will occur within 50 years, but I hope I am wrong — knowing exactly where/what/how many opportunities exist is absolutely essential to opening the widest possible gateway for humans to expand into the solar system.