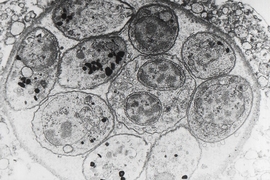 ↓ Download Image
Caption: Toxoplasma gondii visible within a pseudocyst.
Credits: Courtesy of the Centers for Disease Control and Prevention

Caption:
Toxoplasma gondii visible within a pseudocyst.
Credits:
Courtesy of the Centers for Disease Control and Prevention

A new target for drug development in the fight against the deadly disease malaria has been discovered by researchers at MIT.

In a paper published today in the journal Cell Host & Microbe, the researchers describe how they identified the drug target while studying the way in which the parasites Toxoplasma gondii, which causes toxoplasmosis, and Plasmodium, which causes malaria, access vital nutrients from their host cells.

Around one-third of the world’s deadly infectious diseases, including malaria and tuberculosis, are caused by pathogens that spend a large portion of their life inside specially built compartments within their host cells.

These compartments, known as “parasitophorous vacuoles,” separate the host cytoplasm and the parasite by a membrane, and thereby protect the parasites from the host cell’s defenses. They also provide an environment tailored to their needs, according to Dan Gold, a postdoc who led the research in the laboratory of Jeroen Saeij, the Robert A. Swanson Career Development Associate Professor of Life Sciences in MIT’s Department of Biology.

“Ultimately what defines a parasite is that they require certain key nutrients from their host,” he says. “So they have had to evolve ways to get around their own barriers, to gain access to these nutrients.”

Previous research has shown that the vacuoles are selectively permeable to small molecules, allowing certain nutrients to pass through pores in the membrane. But until now, no one has been able to determine the molecular makeup of these pores, and how they are formed.

When studying Toxoplasma, the researchers discovered two proteins secreted by the parasite, known as GRA17 and GRA23, which are responsible for forming these pores in the vacuole, Gold says.

The researchers discovered the proteins’ roles by accident, while investigating how the parasites are able to release their own proteins out into the host cell beyond the vacuole membrane after invasion.

Similar research into how the related Plasmodium pathogen performs this trick had identified a so-called “protein export complex” that transports encoded proteins from the parasite into its host red blood cell, which transforms these red blood cells in a way that is vital to the spread of malaria. “The clinical symptoms of malaria are dependent on this process and this remodeling of the red blood cell that occurs,” Gold says.

The researchers identified proteins secreted by Toxoplasma that appeared to be homologues, or of shared ancestry to, this protein export complex in Plasmodium. But when they stopped these proteins from functioning, they found it made no difference to the export of proteins from the parasite beyond the vacuole.

“We were left wondering what GRA17 and GRA23 actually do, if they are not involved in protein export, and so we went back to look at this longstanding phenomenon of nutrient transport,” Gold says.

When they added dyes to the host cell, and again knocked out the two proteins, the researchers found that it prevented the dyes flowing into the vacuole. “That was our first indication that these proteins actually have a role in small-molecule transfer,” he says.

More significantly though, when the researchers expressed a Plasmodium export complex gene in the modified Toxoplasma, they found that the dyes were able to flow into the vacuole once again, suggesting that this small-molecule transport function had been restored.

“All of this came together to strongly suggest that this protein that is involved in protein export in Plasmodium may also have an additional function in small-molecule transport,” Gold says.

Crucially, since these proteins are only found in the parasite phylum Apicomplexa, to which both Toxoplasma and Plasmodium belong, they could be used as a drug target against the diseases they cause, including malaria, he says.

“This very strongly suggests that you could find small-molecule drugs to target these pores, which would be very damaging to these parasites, but likely wouldn’t have any interaction with any human molecules,” he says. “So I think this is a really strong potential drug target for restricting the access of these parasites to a set of nutrients.”

In addition to malaria, the technique could also be used to target the parasite Eimeria, which affects cattle and poultry, among other animals, and therefore has a huge economic cost, Gold says.

This “very exciting” research elegantly identifies a molecular component of a pore in the vacuole that separates the growing Toxoplasma parasite from its host cell to help in the acquisition of nutrients, according to Manoj Duraisingh, a professor of immunology and infectious diseases at Harvard School of Public Health who was not involved in the research.

“Strikingly, this molecule is conserved for this function in the related and deadly malaria parasite Plasmodium, where it was intriguingly found to be a part of a complex required for the export of proteins for the transformation of the host red blood cell and the virulence of the parasite,” Duraisingh says. “This suggests that a virulence determinant in Plasmodium parasites was co-opted from a basic function of parasitism broadly conserved in apicomplexan parasites.”

Seeking answers from a mysterious parasite