Seeking answers from a mysterious parasite 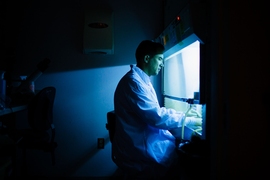 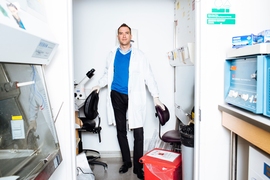 Toxoplasma gondii is a common parasite often spread by cats. Most people who are infected in Europe or North America show no symptoms at all, and only a few suffer from encephalitis or ocular toxoplasmosis, which can cause blindness. However, in South America, toxoplasmosis is associated with much more severe symptoms.

Jeroen Saeij, an MIT associate professor of biology, is trying to determine just why this parasite has such varied effects. Toxoplasma gondii comes in dozens of different strains, each of which produce slightly different versions of the proteins required to infect a cell.

“In the end, what we really want to know, on a molecular level, is what are the Toxoplasma proteins that affect virulence or modulation of the host cell, and with what host proteins do they interact?” Saeij says.

His lab has characterized many such interactions, in hopes that a better understanding of the immune response to Toxoplasma gondii will help scientists develop new drugs against the parasite — and possibly its close cousin, Plasmodium falciparum, which causes malaria.

As an aspiring young scientist, Saeij did not know that he would end up studying Toxoplasma. Growing up in Groede, a small village of about 2,000 people in the southwest corner of the Netherlands, he was interested in math and the physical sciences as well as biology. At Wageningen University, he decided to study bioprocess technology — the design of reactors in which living organisms produce useful compounds, such as drugs — as well as the design of the organisms themselves.

“I chose that because I didn’t really know what I wanted to do, and it’s kind of a mixture of biology, math, and physics,” he says.

During his last two years of college, Saeij became more interested in the organisms going into the reactors than the design of the reactors. He spent a semester studying viruses used in some bioprocesses, which got him interested in infectious diseases. He also spent a semester studying the immune system of fish — specifically, how fish respond to infection by trypanosomes, a class of pathogens that also includes the parasites that cause sleeping sickness and Chagas disease.

“We mainly used them because we were studying the evolution of the immune system, and fish are the first vertebrates with relatively complex immune systems,” Saeij says. “The parasite was just something they had in the lab that would cause an immune response.”

He stayed at Wageningen University for graduate school, continuing to study fish immunology. During that time, he also became interested in studying how parasites evade the host response. He hadn’t really considered going to the United States for his postdoctoral research, but in searching for experts in parasitology, he came across John Boothroyd at Stanford University, who was studying Toxoplasma.

“To be honest, when I went there I didn’t know much about Toxoplasma or that that would be the parasite I wanted to study,” he recalls. “I knew that I wanted to study parasites and host-parasite interactions.”

Stanford seemed like a sunnier alternative to Oxford University, where he was also considering going, to study the malaria parasite, so he went off to California. At the time, he planned to stay in the United States for two or three years and then return to the Netherlands. However, he became absorbed in the project he was working on, studying the genetics of Toxoplasma strain differences in virulence, and ended up staying at Stanford for five years.

A diversity of strains

At the end of his time as a postdoc, Saeij decided to stay in the United States, where he had found more opportunities for junior faculty to launch their own research programs: In the Netherlands at that time, there was less money for research and less freedom to follow one’s own research direction.

“I wanted to have the experience of having my own lab and a startup package, being my own boss, being able to do research on whatever I want and not having anybody tell me you have to do this kind of research,” Saeij says.

He joined the MIT faculty as an assistant professor in 2007 and began studying the interactions between the Toxoplasma parasite and its hosts. While Toxoplasma can infect any warm-blooded animal, it has different effects in different animals. Strains found in South America, in particular, tend to be much more harmful to humans.

“When I started my lab, we immediately tried to get as many strains as possible so we could study how these South American strains are different,” Saeij says.

All strains of Toxoplasma produce certain proteins that play various roles in infection. Some of these proteins block host cell defenses, while others provoke inflammation. The makeup of these proteins influences how virulent each strain is in different host organisms.

In a study published in 2013, Saeij’s lab infected immune cells called macrophages with 30 different Toxoplasma strains and analyzed how they responded to each one. They found that certain strains induce a very strong inflammation in cells by turning on an immune reaction called the type 1 interferon response, normally only seen during viral infection.

His lab recently identified the mechanism by which a type of rat called the Lewis rat is able to completely evade Toxoplasma infection — a very unusual ability. In these rats, macrophages die as soon as they become infected, preventing the disease from spreading to the rest of the body. The team is now trying to identify in greater detail how this happens.

Saeij is also investigating how Toxoplasma obtains nutrients from host cells. Members of his lab recently discovered a protein that forms a pore in the membrane in which Toxoplasma isolates itself inside the host cell. Furthermore, they found that the parasite is no longer virulent if it is missing one of the proteins that form the pore, raising the possibility of developing drugs that target that protein. These pores are also found in Plasmodium falciparum, so such drugs could also prove useful against malaria.

“We think this could be a really good drug target,” Saeij says. “This is the first time we are working on something that would have much broader applicability.”

On the trail of a stealthy parasite