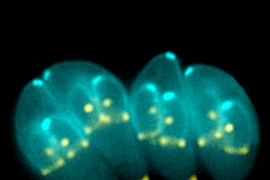 Caption:
Toxoplasma gondii
Credits:
image: wikipedia/Ke Hu and John Murray
Toxoplasma gondii, a parasite related to the one that causes malaria, infects about 30 percent of the world’s population. Most of those people don’t even know they are infected, but a small percentage develop encephalitis or ocular toxoplasmosis, which can lead to blindness.

MIT biologist Jeroen Saeij and his colleagues are trying to figure out why some forms of the disease are so innocuous, while others ravage their victims. In their latest paper, they analyzed 29 strains of the parasite and found that some of those endemic to South America or atypical in North America provoke very strong inflammation in the cells they infect, which can severely damage tissue.

“You have a lot of strains that are silent, and then you have these exotic strains that can cause very severe disease,” says Saeij, the Robert A. Swanson Career Development Associate Professor of Life Sciences. “The goal of the project was to see how different are these South American strains compared to strains that are really prevalent in North America and Europe.”

Toxoplasma spores are found in dirt and easily infect farm animals such as cows, sheep, pigs, and chickens. Humans can be infected by eating undercooked meat or unwashed vegetables. Infection rates vary around the world: In the United States, it’s about 10 to 15 percent, while rates in Europe and Brazil are much higher, around 50 to 80 percent.

The strains that circulate most commonly in North America and Europe usually cause problems only in people with suppressed immune systems, such as AIDS patients or transplant recipients, although some atypical North American and European strains have been associated with severe ocular toxoplasmosis. It can also be dangerous for a woman to become infected while pregnant, as the parasite can cause birth defects.

In South America, there is a much higher incidence of severe symptoms in otherwise healthy people. Scientists are still unsure what makes some South American strains so virulent, in part because most studies have focused on the North American and European varieties.

In the new study, which appears this week in the journal PLoS Pathogens, Saeij and colleagues infected mouse immune cells known as macrophages with each of the 29 strains they had collected, representing global diversity. Macrophages are one of the parasite’s major targets and also a critical part of the host’s immune response.

After infecting the cells, the researchers sequenced all of the messenger RNA molecules in the host cells. This reveals which genes — both parasite and host — are most active during infection.

Most strikingly, some South American and some atypical North American strains induced a type of immune reaction usually only seen during viral infection, known as the type 1 interferon response. This generates very strong inflammation in the host cells, which the researchers suspect may be causing the severe effects produced by those strains.

Paradoxically, the parasite only sets off this immune response after the host cell has killed it, spilling the parasite’s DNA and RNA into the cell.

She notes that a strain adapted to long-term survival in rats may cause a fatal infection in mice, or vice versa, because it might modulate host immune responses too much or not enough in hosts it is not optimally adapted to.

The study greatly broadens the field of Toxoplasma research, says Laura Knoll, an associate professor of medical microbiology and immunology at the University of Wisconsin. “We tend to focus on only a few strains of Toxoplasma,” says Knoll, who was not part of the research team. “This is one of the first papers that really tries to characterize a lot of strains, and very diverse strains.”

The MIT researchers are now investigating why host cells kill certain South American strains so much more effectively, and why that killing provokes the interferon response. They have put their data, which includes gene expression profiles for all 29 strains, into a publicly available database for other researchers to use and add to. “There’s a lot of data, and we still understand very little of it,” Saeij says. “We hope that other people will now start studying more of these South American strains.”

The research was funded by the New England Regional Center of Excellence, the Pew Scholars Program in the Biomedical Sciences, a Robert A. Swanson Career Development Award, the Knights Templar Eye Foundation, the Wellcome Trust Foundation, and the National Institutes of Health.

System developed at MIT CSAIL aims to help linguists decipher languages that have been lost to history.