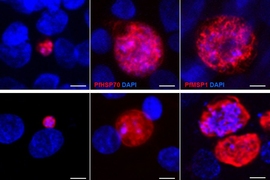 Caption:
MIT researchers engineered liver-like cells that can be infected with several strains of the parasite that causes malaria, including Plasmodium falciparum (top row) and Plasmodium berghei (bottom row). The red stain reveals parasite infection.
Credits:
Courtesy of the researchers

In 2008, the World Health Organization announced a global effort to eradicate malaria, which kills about 800,000 people every year. As part of that goal, scientists are trying to develop new drugs that target the malaria parasite during the stage when it infects the human liver, which is crucial because some strains of malaria can lie dormant in the liver for several years before flaring up.

A new advance by MIT engineers could aid in those efforts: The researchers have discovered a way to grow liver-like cells from induced pluripotent stem cells. These cells can be infected with several strains of the malaria parasite and respond to existing drugs the same way that mature liver cells taken from human donors do.

Such cells offer a plentiful source for testing potential malaria drugs because they can be made from skin cells. New drugs are badly needed, since some forms of the malaria parasite have become resistant to existing treatments, says Sangeeta Bhatia, the John and Dorothy Wilson Professor of Health Sciences and Technology (HST) and Electrical Engineering and Computer Science at MIT.

“Drug resistance is emerging that we are continually chasing. The thinking behind the call to eradication is that we can’t be chasing resistance and distributing bed nets to protect from mosquitoes forever. Ideally, we would rid ourselves of the pathogen entirely,” says Bhatia, who is also a member of MIT’s Koch Institute for Integrative Cancer Research and Institute for Medical Engineering and Science (IMES).

These cells, described in the Feb. 5 online issue of Stem Cell Reports, could also allow scientists to test drugs on cells from people with different genetic backgrounds, who may respond differently to malaria infection and treatment.

Until now, malaria researchers have not had many reliable ways to test new drugs in liver tissue. “What’s historically been done is people have tried to make do with the systems that were available,” Bhatia says.

Those systems include testing drugs in cancerous liver cells or in mice infected with a rodent-specific version of the malaria parasite. However, cancerous cells divide much more frequently than normal adult liver cells, and are missing some of the genes required for drug metabolism. The mouse model is not ideal because the rodent version of malaria is different from the human one, so drugs that are successful in mice don’t always work in humans.

In 2013, Bhatia and colleagues showed that they could mode malaria infection in adult liver cells, known as hepatocytes, taken from human donors. However, this generates only a limited supply from each donor, and not all of the cells work well for drug studies.

The researchers then turned to induced pluripotent stem cells. These immature cells can be generated from human skin cells by adding several genes known as reprogramming factors. Once the cells are reprogrammed, they can be directed to form differentiated adult cells by adding specific growth factors.

To create liver cells, the researchers added a series of growth factors, including hepatocyte growth factor. Working with Charles Rice of Rockefeller University and Stephen Duncan of the Medical College of Wisconsin, Bhatia’s lab generated these cells in 2012 and used them to model infection of hepatitis C. However, these cells, known as hepatocyte-like cells, did not seem to be as mature as real adult liver cells.

In the new study, the MIT team found that these cells could be infected with several strains of malaria, but did not have the same drug responses as adult liver cells. In particular, they were not sensitive to primaquine, which works only if cells have a certain set of drug-metabolism enzymes found in mature liver cells. This is important because primaquine is one of only two drugs approved to treat liver-stage malaria, and many of the drugs now in development are based on primaquine.

“This study is a major breakthrough,” says Dyann Wirth, chair of the Department of Immunology and Infectious Diseases at the Harvard School of Public Health, who was not part of the research team. “This technique may prove not only a useful tool for finding drugs that will target the liver stage of the parasite, but it could also contribute to our fundamental understanding of the parasite.”

The MIT team is now working with the nonprofit foundation Medical Malaria Ventures to test about 10 potential malaria drugs that are in the pipeline, first using adult donor liver cells and then the hepatocyte-like cells generated in this study.

These cells could also prove useful to help identify new drug targets. In this study, the researchers found that the liver-like cells can be infected with malaria when they are still in the equivalent of fetal stages of development, when they become cells known as hepatoblasts, which are precursors to hepatocytes.

In future studies, the researchers plan to investigate which genes get turned on at the point when the cells become susceptible to infection, which may suggest new targets for malaria drugs. They also hope to compare the genes needed for malaria infection with those needed for hepatitis infection, in hopes of identifying common pathways to target for both diseases.

The research was funded by the Bill and Melinda Gates Foundation; the Singapore Agency for Science, Technology and Research; and the Howard Hughes Medical Institute.