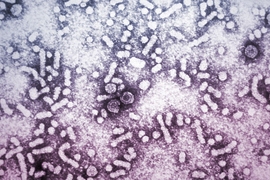 ↓ Download Image
Caption: An electron micrograph shows the presence of hepatitis-B virus.
Credits: Courtesy of the Centers for Disease Control and Prevention

Caption:
An electron micrograph shows the presence of hepatitis-B virus.

Credits:
Courtesy of the Centers for Disease Control and Prevention

A new technique for studying the lifecycle of the hepatitis B virus could help researchers develop a cure for the disease.

In a paper published today in the journal Proceedings of the National Academy of Sciences, Sangeeta Bhatia of MIT and Charles Rice of Rockefeller University describe using microfabricated cell cultures to sustain hepatitis B virus in human liver cells, allowing them to study immune responses and drug treatments.

Around 400 million people worldwide are infected with the hepatitis B virus (HBV); of those, one-third will go on to develop life-threatening complications, such as cirrhosis and liver cancer.

Although there is an effective HBV vaccine, only around 50 percent of people in some countries where the disease is endemic are vaccinated. A complete cure for the disease is very rare, once someone has been chronically infected.

“Once a liver cell is infected, the viral genome persists inside the nucleus, and that can reactivate later,” says Bhatia, the John and Dorothy Wilson Professor of Health Sciences and Technology and Electrical Engineering and Computer Science. “So although we have a vaccine, it’s important to find a way to study this persistent form of the virus to try to identify treatments that could efficiently clear it.”

To develop a treatment for HBV, researchers need to be able to study infected liver cells, known as hepatocytes, so they can understand how the virus interacts with them.

But while researchers have previously been able to infect cultures of human hepatocytes with HBV, the cells’ limited lifespan has made it difficult to study the virus, says Bhatia, who is also a Howard Hughes Medical Institute investigator and a member of MIT’s Koch Institute for Integrative Cancer Research and Institute for Medical Engineering and Science.

“That’s because the hepatocyte — the main cell in the liver — is unstable,” she says. “It’s a very finicky cell, and when you isolate it from the liver and try to culture it under conventional conditions, it rapidly loses its repertoire of liver functions.”

So the team set out to develop a technique to keep the liver cells stable and functioning long enough to monitor their response to the virus and antiviral drugs.

They based their approach on a system they had previously developed for studying the hepatitis C virus, in which they were able to successfully infect human hepatocytes with the virus and use it to compare antiviral regimens.

The hepatocytes are first patterned onto surfaces dotted with tiny spots of collagen, and then surrounded by supportive tissue made up of stromal cells, which act as connective tissue and support the hepatocytes in carrying out their liver functions.

When they compared the relative merits of the two systems, they found that the primary liver cells had a stronger immune response when infected with the virus than the stem cell progeny. However, unlike the primary hepatocytes, the hepatocyte-like cells offer an unlimited supply of test cells, since the researchers can simply grow more as required, Bhatia says.

“But that being said, both systems were able to grow this persistent nuclear form [of HBV], so we think they offer complementary tools,” she says.

To investigate whether the cell cultures could be used to test new treatments for the disease, the researchers monitored their response to two existing drugs. They found that the infected cultures responded to the drugs in the same way that liver cells inside the body are known to do. This means the systems could be used to help predict how effective new treatments will be in eradicating the virus from liver cells, Bhatia says.

Having developed the technique, the researchers now plan to begin using it to investigate new treatments for HBV. They also plan to use the model to study liver cells’ natural antiviral response in more detail, and in particular to try to understand why cells from different donors have different immune responses to the disease.

Raymond Chung, vice chief of the gastrointestinal unit at Massachusetts General Hospital, who was not involved in the research, says that despite the availability of effective vaccines, researchers have made few inroads into eliminating HBV. “While we have excellent suppressive therapies, there are no truly curative treatments, in large measure because we have been handicapped by the lack of robust cell-culture models that support HBV infection,” he says.

“The new approach described here provides one avenue by which we may more effectively study the HBV lifecycle, and in so doing identify new agents that block additional steps in that lifecycle,” he adds. “Using such an approach could bring us one step closer to a cure for HBV.”