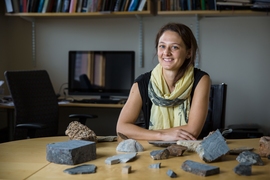 Microbes may seem small and insignificant, but in evolutionary terms the tiny organisms punch far above their weight.

Although only a few micrometers in size, microbes have been responsible for shaping much of the world around us, including the air that we breathe and the ground that we walk on.

Bosak, who is also director of the MIT Laboratory for Geomicrobiology and Microbial Sedimentology, investigates how life and the environment evolved together during the early years of Earth’s history. “I’m interested in how we can tell what microbes were doing over large periods of Earth’s history when there was really nothing else but these small organisms,” Bosak says.

This research takes her all over the world, studying the shape of rocks to understand how the behavior of microbes influenced the development of these formations over billions of years, she says.

In addition to studying the rocks at sites such as Yellowstone National Park, Bosak and her team also collect samples of cyanobacteria and other microorganisms to take back to her laboratory. There, they grow the microbes under different conditions, in an attempt to understand the physical, chemical, and biological processes that influence their behavior.

These experiments include exposing the microbes to different oxygen concentrations, or varying the intensity of light, or even changing the duration of their day, and monitoring how they respond to these changing conditions, Bosak says.

The team recently developed a wave tank containing a layer of sediment, for example, which allows them to place the microbes within a realistic moving marine environment. They found that the microbes formed ridged and pitted structures in the sediment. These pitted structures are known to have been a common feature of the environment at the time the first animals were beginning to evolve. This means these early animals were living with microbes all around them, and possibly ate them, Bosak says.

“We do a lot of experiments with the microbes to find out how they aggregate, and what forces guide that,” she says. “In some cases we find that it’s actually the presence of oxygen that helps them to form different shapes, or at other times we look at the spacing between the structures they form to figure out that a lot of these microbes grew in very shallow, quiet environments and were limited by the flow of nutrients that they were photosynthesizing.”

By studying the way microbes form structures, Bosak ultimately hopes to uncover clues to when microbes first learned how to produce oxygen. “One of the biggest questions in evolutionary biology is when oxygen first appeared,” Bosak says. “We know it appeared in the atmosphere around 2.2 billion years ago, but how long before that did cyanobacteria first figure out how to make it?”

Bosak and her team have observed that microbes produce oxygen bubbles as they photosynthesize. Some of these bubbles can then be preserved in the rocks themselves as tiny circles. They have already found examples of these oxygen circles in rocks that are billions of years old, and are using the marks to pinpoint how long ago microbes began producing these bubbles — and therefore, when they started photosynthesizing.

“There are some staggering examples of behaviors in microbes that seem to have continued in the same manner over billions of years,” Bosak says.

From Croatia to MIT

Bosak was born in Croatia but moved to the United States as a graduate student in 1999, as she found there were limited opportunities for undertaking basic scientific research in her home country. She completed her PhD at the California Institute of Technology in Pasadena in 2004.

Since moving to MIT in 2007, she has enjoyed the opportunity to collaborate with other researchers in her department. “These collaborations have taken my research into so many new directions,” Bosak says. “My department is very supportive of junior people and I love being at a place that values ideas and basic research so much.”

In addition to studying the impact microbes had on the early history of the planet, Bosak and her team have also begun looking at microbial influence over modern environments, she says.

The team recently took a field trip to the Bahamas, where it became clear to Bosak just how important microbes continue to be to the biology, geology, and chemistry of the planet. Microbes still exercise considerable control over the Earth’s oxygen, carbon, and sulfur cycles, for example, and there is a lot that we do not yet understand about their role in these processes, she says.

“Even in modern environments, where you have animals and trees and other organisms, much of these environments are still shaped by microbes,” Bosak says. “So we really want to investigate more of the physiology of these modern marine microbes, how they shape carbonate sediments today and how they respond to environmental stresses.”

But Bosak continues to devote most of her time and attention to Earth’s history. “The interactions between the planet and its life are fascinating,” Bosak says. “I would love to know what our planet would look like without life, and why it looks so different because there is life on it.”