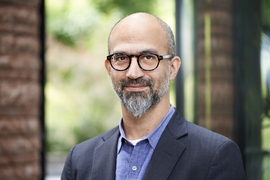 John E. Fernandez, a professor of building technology in the Department of Architecture, has been named as the new director of MIT’s Environmental Solutions Initiative (ESI), a campuswide initiative launched in 2014. Fernandez succeeds Susan Solomon, the Ellen Swallow Richards Professor in the Department of Earth, Atmospheric and Planetary Sciences, who has served as the Initiative’s founding director.

“I’m honored to be taking over from such an eminent scientist,” says Fernandez, who has served on the MIT faculty for 16 years. “It’s really humbling to hear her talk about her work and be given the opportunity to extend the reach of the ESI.”

Fernandez’s appointment was announced today in a letter to the MIT community from Provost Martin Schmidt and Vice President for Research Maria Zuber.

“Professor Fernandez approaches this role as a world expert on high-performance, sustainable building materials, as a leading scholar on the resources and infrastructure of cities — home to more than half the human population — and as a practicing architect who has led the design for more than 2.5 million square feet of new construction in cities from Washington, D.C., New York, and Los Angeles to Jakarta, Tokyo, and Shanghai,” Schmidt and Zuber wrote. “A member of our faculty since 1999, he founded and directs the Urban Metabolism Group, a highly multidisciplinary research group that studies how intelligent design and technology can reduce the resource intensity of cities.”

Since its founding in May of last year, ESI has awarded nine seed grants for research projects, on efforts that include promoting sustainable consumption in cities, improving methods for safe mining on land and at sea, and improving air quality and plans to mitigate global climate change. Such highly multidisciplinary projects can be difficult to fund through traditional channels.

“I’m delighted to be passing the reins to such a well-qualified and distinguished scholar,” Solomon says. “John Fernandez has a deep understanding of MIT’s strengths across a very diverse suite of environmental challenges, and he brings a clear commitment to excellence and breadth. I’ll be looking forward to seeing him take ESI to the next level.”

Fernandez says ESI’s broad scope is illustrated by the very different backgrounds of its first two directors. “I’m very optimistic about the vision for ESI,” he says: If this initiative can embrace leaders from fields as different as atmospheric science, architecture, and building technology, “It speaks to the breadth of MIT, and the commitment to the ESI.”

Fernandez’s research looks at the environmental consequences of societal activities — which tend to be concentrated in the world’s cities. “Decisions that architects and planners make can have huge ramifications, because the built environment accounts for the consumption of enormous quantities of energy and materials,” he says. Such environmental consequences, he says, “should be integral to a designer’s thinking process.”

“The Intergovernmental Panel on Climate Change has shown the built environment to be one of the major contributors to global emissions,” Fernandez says. “What is less well known is that a majority of raw materials extracted and processed are used in the construction and operation of buildings, roads and other large-scale infrastructure. For that reason, much of my work has been focused on understanding the environmental benefits of resource-efficient buildings and cities.”

Since more than half of the world’s population now lives in urban areas, Fernandez says, he has focused on systems involved in the functioning of modern cities, from buildings and transportation to the delivery of food, water, sanitation services, and goods — and the resource intensities associated with these services. The research outcomes from his group contribute to a field known as “urban metabolism,” because it treats the city as an interconnected whole, rather than focusing on individual components or economic sectors. This is best done through a multidisciplinary approach.

In the work of the ESI, Fernandez says, “many solutions will require multiple perspectives” — which underscores the importance of communication and collaboration among disciplines, and an understanding of different modes for tackling problems through science, engineering, design, and policy.

Fernandez sums up his vision for the Initiative by considering the three components of its name: environmental, solutions, and initiative.

On the environment, he says, “the priority is to progress beyond the discussion of the uncertainties about climate change, to delve deeper into research that tells us more about the consequences of climate change, and to do research in targeted ways that will tell us about the kinds of risks we are facing.” Researchers tackling those issues should be provided with resources to do their work, but also to help them in communicating “a very simple but unequivocal message that the science of the climate is well-established and the most conclusive it can be, and is telling us very dire things that we should really pay attention to.”

The second priority, Fernandez says, lies in solutions. It’s essential, he says, “to propose pathways toward mitigation and adaptation in every aspect of society, with regard to every important human activity, enlisting engineers, scientists, architects, economists, political scientists, and others, and with regard to all regions of the world.” For example, hundreds of millions of people live in coastal cities, which face significant threats from sea-level rise. Designers need to converge on integrated solutions with other disciplines to enlist multiple systems for adapting these cities, he says “so that we’re not approaching this in a siloed way.”

The initiative part of the ESI’s name, Fernandez says, “is the part that I hope will bear important short-term and local results for MIT. I believe this initiative has the critical responsibility to initiate action across diverse communities at MIT.”

The ESI, Fernandez adds, should involve all sectors of our community — undergraduate and graduate students, postdocs, faculty, researchers, and staff. “We will be working to initiate a great many actions for the environment, both local and global,” Fernandez says. “Some will be very targeted and modest, and others extraordinarily ambitious, broad and sweeping.”

One example of a way in which Fernandez hopes to implement this agenda, he says, is in funding student projects, including some that might relate directly to residential life: “Support for even very modest but very immediate grassroots projects, where it’s right there in front of you, is something I’m very keen to launch as soon as possible,” he says.