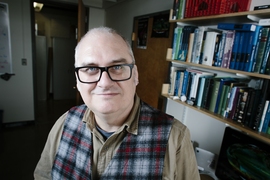 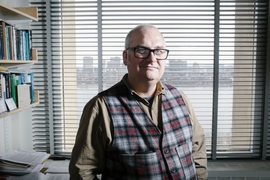 Dip a beaker into any portion of the world’s oceans, and you’re likely to pull up a swirling mix of planktonic inhabitants. The oceans are teeming with more than 5,000 species of phytoplankton — microscopic plants in a kaleidoscope of shapes and sizes. Together, phytoplankton anchor the ocean’s food chain, supplying nutrients to everything from single-celled organisms on up to fish and whales.

Phytoplankton play a fundamental role in regulating Earth’s climate. But figuring out exactly how these organisms contribute to climate change is a tricky undertaking, primarily because they are so diverse: Any given species may have a set of genetic or physical characteristics entirely different from any other, leading to different behaviors and habitats.

Such diversity can appear, at the outset, “bewilderingly complex,” says Mick Follows, an associate professor of oceanography in MIT’s Department of Earth, Atmospheric and Planetary Sciences (EAPS). He says wrestling such diversity into global climate models is a futile task. But lumping phytoplankton into a big “black box” can be equally unenlightening.

Instead, Follows is working at an intermediary level, developing models of marine microbes at the cellular and community levels, to tease out fundamental processes that may be worked into global climate models.

“We’re starting to open up the black box of simple models,” Follows says. “There’s a balance: Do you want to understand every detail of the world, or do you want to be able to stand back and have a big picture view? Somehow you have to keep circling around it from both directions to develop that view.”

For more than 20 years, Follows has worked as a research scientist at MIT, answering such questions. He was granted tenure as an associate professor in 2013.

“I’m now interacting with undergraduates in a way I wasn’t doing in my little research hole, and I have a whole new appreciation for the broader aspects of MIT,” Follows says. “I feel much more connected to the Institute as a whole.”

While growing up, Follows didn’t expect he would end up in academia: School wasn’t a priority then.

Follows grew up in a small town in the British region of East Anglia, and fondly remembers “riding bikes around the countryside, and living quite freely.”

His father was a typesetter at a local newspaper, and his mother worked in a men’s clothing shop. Both his parents have roots in Manchester — “a downtrodden, post-industrial place,” Follows says — where his mother was nevertheless able to win a scholarship to a good public school.

“She worked in shops, and in the field, but would be quoting Shakespeare,” Follows says of his mother’s path.

Follows was less inclined toward school, and ended up leaving high school. “I don’t think people think of me this way now, but I was a bit of a loudmouth,” Follows recalls.

He ultimately continued his studies at a community college, and spent a year at an art school — a fact that he’d rather overlook: “My work was rubbish — terrible!”

He then decided to pursue studies in math and physics at the University of Leeds. “I liked the organization [the subjects] brought to the world,” Follows says. While exploring graduate programs, he was particularly drawn to atmospheric science. Follows enrolled at the University of East Anglia, where he earned a master’s degree and a PhD in atmospheric sciences, studying atmospheric circulation of ozone. In his research, he began to see parallels between the atmosphere and the oceans.

“How ozone gets down from the stratosphere to troposphere, there’s an analogous process, flipped, when you think of how nutrients get from the subsurface to the surface of the ocean, and I started thinking more about the ocean,” Follows says.

In particular, Follows felt there was an opportunity to contribute to a then-emerging field. “While coupled circulation and chemistry models were established for the atmosphere, the same was just spinning up in the oceans,” Follows says. “It seemed the ocean world was a bit less crowded, and there were interesting problems.”

Follows credits his colleague John Marshall, now the Cecil and Ida Green Professor of Oceanography, for providing his path to MIT. Follows was still at the University of East Anglia when he first met Marshall, then a postdoc at Imperial College London.

“Being as I was the local guy, I said, ‘I’ll show you a place where we can go get a meal,’” Follows recalls. “I sat next to John and said, ‘Are you looking forward to going to MIT?’ And he kind of frowned as he does, and said, ‘You want to go?’”

A few weeks later, Marshall called Follows about a postdoc position opening up at Imperial College. Follows accepted the position, and then after a year, received a similar call from Marshall, this time to MIT. In 1992, Follows arrived on campus as a postdoc, and stayed for the next 20 years as a research scientist.

From a black box to the real world

At MIT, Follows has devoted his research to understanding the biological processes of phytoplankton and other microbes that contribute to the Earth’s carbon cycle. Initially, though, every microbe seemed to blur together.

He eventually teamed up with Sallie “Penny” Chisholm, the Lee and Geraldine Martin Professor in Environmental Studies at MIT, who discovered Prochlorococcus —the most abundant photosynthetic organism in the world. Chisholm was studying subpopulations of Prochlorococcus, and mapping individual communities in the ocean.

“Suddenly there was a beautiful system where organisms that are almost the same, but not quite, are taking different habitats, occupying different niches in the environment,” Follows says.

Chisholm’s data of diverse microbes stirred up an idea: What if the diversity in phytoplankton could be modeled based on natural selection? Could one predict the makeup of a microbial community, based on its inhabitants’ traits? It was a simple idea, and yet no one had attempted to realize it in global models.

Follows and his group developed a model — essentially a virtual ocean environment — in which a realistic set of microorganisms with diverse traits can interact and compete. The model determines which traits are the fittest phenotypes — the ones that will dominate in a given ocean community.

“I think that in the field, we had reached a bit of a stalemate, where you would just keep adding more parameters and tuning more knobs to fit the real world,” Follows says. “We turned around and said, ‘Let’s build a videogame — make an environment, throw some players in, ask how the system organizes itself, and acknowledge that in the real world, there is a huge diversity of organisms.’”

This radical thinking earned Follows a grant from the Moore Foundation in 2007, which he used to start the Darwin Project, a cross-campus collaboration between oceanographers, biogeochemists, and marine microbiologists at MIT to develop global ocean-circulation models built around fundamental microbial processes.

Follows is continuing to run the Darwin Project, and just recently became a member of SCOPE — the Simons Collaboration on Ocean Processes and Ecology — a five-year project based at the University of Hawaii. He and his fellow researchers will measure and model ocean communities around Hawaii, which are thought to be representative of a large swath of the North Pacific. Their goal is similar to Follows’ original vision: to elucidate how such tiny organisms can have such huge climatic impacts.

“The climate system is incredibly tied up with life,” Follows says. “You can think of man in the same way as those first photosynthetic bacteria that changed the planet in a radical way, to a completely different set of requirements if you wanted to survive on that planet. Are we that thing now? Or are we a blip? It’s interesting to put it in perspective.”

Broadening the 'SCOPE' of microbial oceanography

For the good of the colony

Bacteria: A day in the life