Bacteria: A day in the life 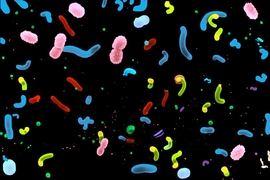 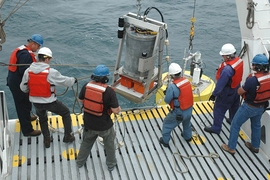 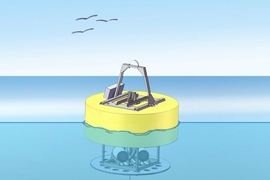 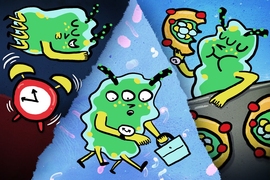 Caption:
“This is the first observation for microbes, on a species by species basis, of this bucket brigade of activities that is happening, boom, every day like clockwork,” says MIT professor Edward DeLong. “You can imagine that these microorganisms sort of punch the time clock and engage in their daily activities at slightly different times, but in the same order each day, across the whole community.”
Credits:
Illustration: Jose-Luis Olivares/MIT. Background micrograph (center) by Ed DeLong and David Karl

We are all creatures of habit, and a new MIT study finds ocean bacteria are no exception.

In a paper published this week in Science, researchers from MIT and elsewhere report that microbes in the open ocean follow predictable patterns of biological activity, such as eating, breathing, and growing. Certain species are early risers, exhibiting genetic signs of respiration, metabolism, and protein synthesis in the morning hours, while others rouse to action later in the day.

Edward DeLong, the Morton (1924) and Claire Goulder and Family Professor in Environmental Systems in MIT’s Department of Civil and Environmental Engineering, says this daily progression of bacterial activity is surprisingly dependable and orderly.

“This is the first observation for microbes, on a species by species basis, of this bucket brigade of activities that is happening, boom, every day like clockwork,” DeLong says. “You can imagine that these microorganisms sort of punch the time clock and engage in their daily activities at slightly different times, but in the same order each day, across the whole community.”

DeLong found that such daily regularity occurs among microbes that are genetically quite different, suggesting that a bacteria’s behavior may not be based solely on an organism’s individual machinery, but by tuning into the timing and rhythm of the larger community.

“It’s like an orchestra that’s finely tuned,” DeLong says. “Organisms are slightly staggered in terms of when they start to chime in, but they’re extremely tightly coupled.”

In September 2011, DeLong and his colleagues deployed a free-drifting robotic sampler for three days in the North Pacific to collect seawater. The robot took samples every two hours from the same community of bacteria.

In the lab, the researchers used RNA sequencing techniques to identify the transcriptome profile of each sample — the genes that are turned on or off at any given moment across the whole community, that ultimately trigger activities such as respiration and metabolism. The researchers pieced together the genetic information to identify diel cycles — 24-hour patterns of behavior — for several species of bacteria.

The majority of samples were dominated by Prochlorococcus, the most abundant photosynthetic organism on Earth. This productive plankton is known to have a very rigorous metabolic schedule, set to the sun. In their genetic analyses, the researchers observed a similar trend: Prochlorococcus started exhibiting signs of metabolic activity at dawn, peaking around noon as it absorbed sunlight and produced carbon.

In addition to Prochlorococcus, the team analyzed five heterotrophic species — bacteria that consume organic carbon to make new cells. Among these populations, a group called Roseobacter was first to exhibit signs of activity after sunrise, with other bacteria soon following suit later in the day.

“Early in the morning, one set of organisms got up first and turned on its genes for making proteins, and also for respiring, and those are proxies for subsequent activity and growth,” DeLong says.

What seems to be happening, DeLong notes, is a “wave-like progression” of activity, set to the clock of Prochlorococcus: At dawn, the plankton begins to absorb sunlight, converting it into carbon for the rest of the ocean community. As more carbon becomes available, heterotrophic species like Roseobacter begin to take it up. As different species have different rates of metabolism, they may be more active at certain times of day.

“What we’re seeing out in the ocean is telling us how complex assemblages of different microorganisms are basically working together and coordinating their activities with time,” DeLong says.

In 2013, the group conducted a similar study, looking at bacterial activity in coastal waters, where they observed less regular metabolic patterns. The reason, DeLong suggests, may be one of available nutrients: Along the coast, bacteria may feast on nutrients from a variety of more sporadic environmental sources, such as rivers and surrounding phytoplankton blooms. In comparison, the open ocean is akin to a desert with very stable conditions. Carbon producers like Prochlorococcus, therefore, become strong regulators, driving much of an ocean community’s metabolic activity.

“To date, oceanographers have been generally blind to the occurrence of daily metabolic cycles in marine bacteria,” says Andrew Allen, an associate professor of microbial and environmental genomics at the J. Craig Venter Institute. “This study represents application of state-of-the-art robotic and automatic sampling of marine microbial communities that is unique in terms of enabling highly standardized collection of samples from the same water mass at depth at short temporal intervals. The reported daily patterns will provide valuable new context for thinking about and modeling microbial processes and associated nutrient cycles and other food web dynamics in the ocean.”

Going forward, the team hopes to get an even clearer picture of a bacterial community’s activity, perhaps even from minute to minute.

“Because of improvements in genome sequencing technologies, we can drill down and sequence a lot deeper into the microbial community’s gene transcripts at each time point,” DeLong says. “Microbes can turn on and off their gene expression on the order of minutes. So we’re getting closer to the resolution of where activities really matter.”

Lauren Hitchings of New Scientist reports on findings showing that marine microbes exhibit daily patterns of behavior. “The researchers think this might be a result of the low nutrient levels in the open ocean, and the need for organisms to rely on one another for metabolic functions,” writes Hitchings.

In a piece for National Geographic, Ed Yong writes about how a team of scientists from MIT has found a corresponding rhythm of behavior amongst marine bacteria. “The study reveals the power of sophisticated sampling devices for studying ocean features that were heretofore inaccessible,” says MIT Prof. Penny Chisholm.

Microbiologists eavesdrop on the hidden lives of microbes