Caption:
Combining modern computation rigor with ancient stone architecture, students constructed and raised a 2,000-pound megalith. "It weighed more than a car, and yet you could move it with a fingertip," says Brandon Clifford, a lecturer in architectural design who co-led the cross studio.
Credits:
Photo: Judy Daniels

Caption:
The studio was an unmitigated success in teaching students the delicate interplay between form and function, says Caitlin Mueller, a professor of building technology. "It helped students understand that disciplinary boundaries are artificial,” she says.
Credits:
Photo: Andy Ryan

Caption:
Professor Nasser Rabbat explaining an inscription in Granada. Working from Rabbat’s deep roots in Islamic architecture — including stories on virtually every room of the Alhambra palace and examinations of the deeply piled history of architectural forms in the city — students were better able to understand the architecture of the city as a living historical conversation.
Credits:
Photo courtesy of Nasser Rabbat.

When Dutch explorers first set eyes on the giant stone megaliths of Rapa Nui (otherwise known as Easter Island), they wondered at how a seemingly unsophisticated culture could move the giant stone heads into place. The Rapa Nui people had a simple explanation: the stones walked themselves. For decades, that explanation has been dismissed as an animistic myth — until recently, anthropologist Carl Lipo discovered that in fact, the stones were built with a forward-leaning center of gravity, such that they could be moved forward just by rocking them back and forth.

“There is so much knowledge trapped in these ancient civilizations that we aren’t equipped to handle today,” says Brandon Clifford, lecturer in architectural design at MIT. As he shared the excitement over the discovery with architectural history and theory professor Mark Jarzombek, the two of them conceived of a course: Megalithic Robotics, in which students would follow in the footsteps of the ancients to construct their own giant megalith. 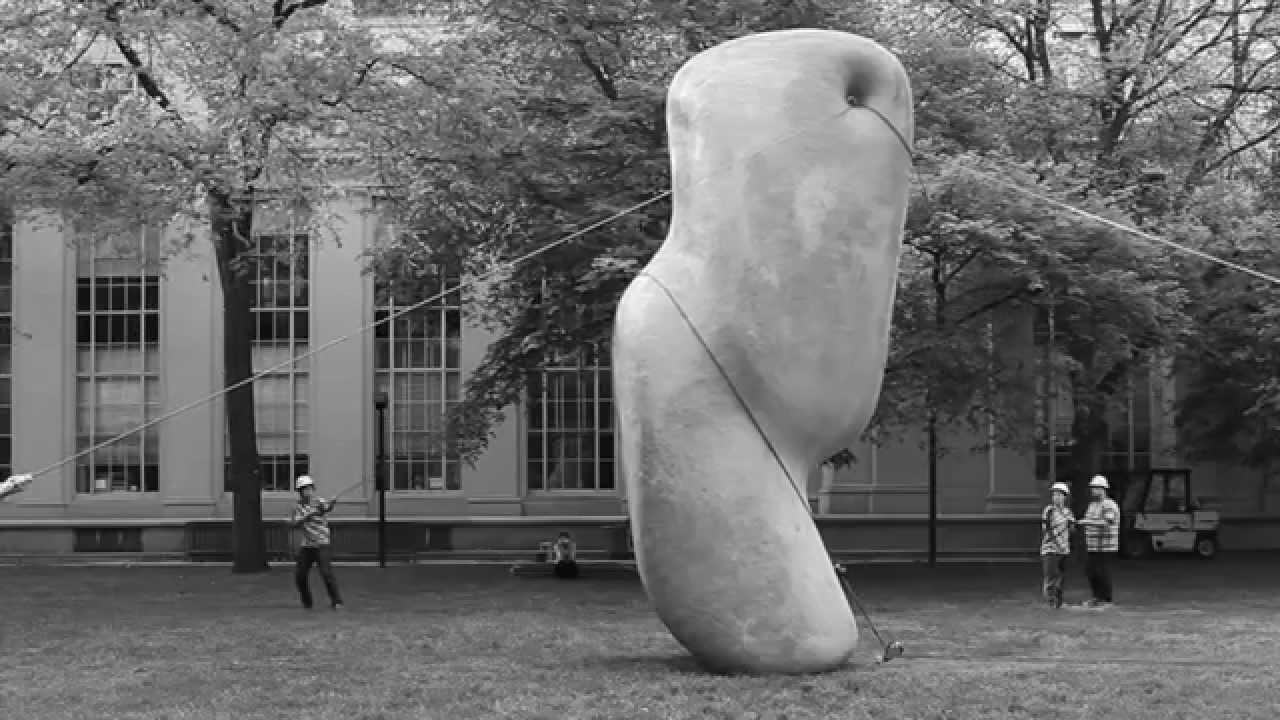 Play video
The 2,000 pound McKnelly Megalith rises in MIT's Killian Court. The structure was constructed by MIT students in the School of Architecture and Planning as part of a "cross studio," a class taught by two faculty from different disciplines. For the Spring 2015 class, "Megalithic Robotics," students raised the 2,000-pound figure with nothing but human power and a few ropes. “It weighed more than a car, and yet, you could move it with a fingertip,” says Brandon Clifford, a lecturer in architectural design at MIT who co-taught the class with Mark Jarzombek, a professor of architectural history and theory.

Clifford provided the modern computational rigor, while Jarzombek lent his expertise in ancient stone architecture to supply the historical context. After constructing table-top models and traveling to Peru to study Incan megaliths, the students stood in Killian Court to raise the 2,000-pound figure to standing with nothing but human power and a few ropes. “There was a moment of elation when it finally stood up,” Clifford remembered. “It weighed more than a car, and yet, you could move it with a fingertip.”

The unique experience was part of an experiment in the MIT architecture department to combine faculty of different disciplines to teach “cross-studio” courses that bridge gaps between architectural design, history, and engineering. “The impulse behind them is to be interdisciplinary not only in dialogue but also in action,” says architecture department head Meejin Yoon. “The beauty of an architecture studio is that you are working on a design project the whole semester very intensely.”

In another cross-studio course titled Un-Flat Inevitabilities, co-taught by architectural design professor Joel Lamere and building technology professor Caitlin Mueller, students examined the soaring concrete shells of Felix Candela and 20th century architects; while the shells are triumphs of imagination, the lack of flat surfaces inside them makes them difficult to inhabit. “They are stunning, but they don’t work architecturally,” Mueller says. “The purity of the relationship between structure and geometry is limiting.”

With a background in both architecture and engineering, Mueller has long worked to reconcile architectural design with the practicalities of structural engineering. Developing a cross studio in partnership with Lamere — an architect who is also an expert in architectural and structural geometry — was the perfect venue to delve into those issues. Students journeyed to Mexico City to examine Candela’s structures and then experimented with designing elements of the shells that would be both beautiful and functional.

“We didn’t produce a single object were I can say this is the perfect answer to this contradiction,” says Mueller. On the other hand, the studio was an unmitigated success in teaching students the delicate interplay between form and function. “It helped students understand that disciplinary boundaries are artificial,” she says. While interdisciplinary collaboration is regularly practiced by MIT faculty, it is virtually invisible to students, who are taking courses in discrete subjects and must make connections themselves, says Yoon. “They don’t see the interaction between faculty from different disciplines coming together.”

By contrast, all of the cross-studio courses were team-taught, with both faculty members in the room at the same time. “It was incredibly exhilarating,” Mueller says. “We were able to riff off each other and contribute different ideas.” That creative friction between disciplines was key in another course, Granada: Design with History, co-taught by architectural design lecturer Cristina Parreño Alonso, and Islamic architecture professor Nasser Rabbat.

Using the Spanish city of Granada as a living laboratory, the studio looked at how architects could design within a historical context, while at the same time transforming it. “The idea was to get students to realize these two different perspectives work in direct collaboration,” Parreño says. “The studio was about simultaneously reading and writing the city, looking at how in the design process there is a strong component of reading what is already there, re-drawing it, and interpreting it.”

Working from Rabbat’s deep roots in Islamic architecture — including stories on virtually every room of the Alhambra palace and examinations of the deeply piled history of architectural forms in the city — students were better able to understand the architecture of the city as a living historical conversation. “They started from these very preconceived ideas of what an architect should do in order to solve problems and the ideas tended to be big buildings and interventions,” Parreño says. “It was rewarding to see some of the students understand more nuanced ways of approaching architecture.”

Based on the successful outcomes of this spring’s cross-studios, the department will put out a call this fall for new cross-studio proposals for next semester. Eventually, Yoon says, the plan is to open up the possibilities campus-wide for collaborations with faculty outside the architecture department — for example, a performance artist co-teaching a course on architecture and performance; or a neuroscientist co-teaching a class on architecture and empathy. If anything, says, Yoon, it will be hard to reign in the possibilities.

In some ways, however, it’s the open format of the courses that created such a rich experience for students. Midway through Clifford and Jarzombek’s course, teaching assistant Carrie McKnelly lost both of her parents in a fire and was unable to accompany the group to Peru. During the trip, students learned that often in Incan culture, stone megaliths were erected to memorialize or commemorate an event. They decided that instead of creating individual projects, they would work together to create the enormous megalith eventually raised in Killian Court, which they dedicated as the McKnelly Megalith.

“The pedagogical goals never changed, but they manifested themselves very differently,” Clifford says. “Working alongside Carrie was so intimate and so real. It wasn’t something we intended, but it ended up becoming one the most memorable experiences I have ever been a part of.” Whether intended or not, that willingness to explore along the boundaries of disciplines shows the best of what these kind of cross-studios can do — opening students to the realities of how architecture can fit into the social fabric of the world. Says Clifford, “I think that is something that they will remember the rest of their lives.”