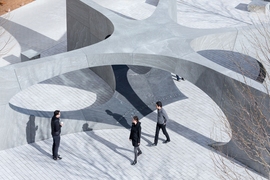 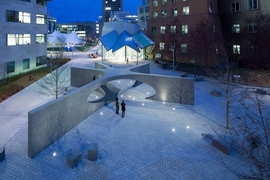 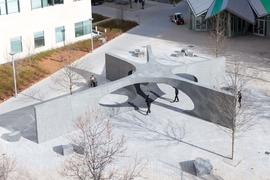 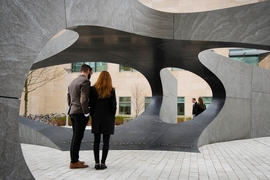 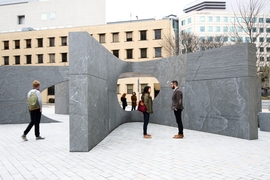 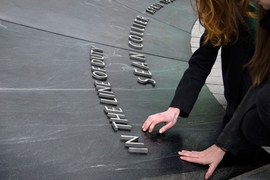 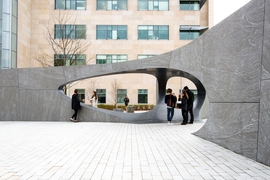 When MIT’s new memorial to Sean Collier is unveiled on Wednesday, the Institute community will get its first close look at a remarkable new structure: 32 massive pieces of polished granite in the form of five radial walls and arches, converging at a keystone above an open space.

In a shape akin to an open hand, the memorial represents the many connections Collier built with the MIT community, as well as the sense of service he brought to his job. In person, the 190-ton memorial has a powerful physical presence — but also a sinuous form that yields a sense of light and openness.

Behind the memorial is a story of MIT administrators and faculty determined to create a fitting memorial for Collier, the MIT police officer killed in the line of duty on April 18, 2013.

The central contributors include an MIT architect who created the unique design; an MIT engineer and architectural historian who, along with his students, made sure the design would work; and a construction crew, featuring Collier’s brother as a project manager, that used exacting techniques to build the novel structure despite this winter’s record-setting snows.

All those elements were highlighted in an MIT event on Monday night that revealed new details of the memorial’s construction.

The Collier Memorial is “a place where we can all pause to reflect upon Sean and his service,” said J. Meejin Yoon, the professor of architecture, and head of the Department of Architecture, who designed the memorial, speaking to an audience of about 300 people in Room 10-250.

Seeing the memorial first stand without scaffolding, several weeks ago, was “a very special moment for all of us,” said John Ochsendorf, the Class of 1942 Professor in MIT’s departments of Architecture and Civil and Environmental Engineering, who closely analyzed the structure’s stability.

The Monday evening event also had an emotional side, with remarks by Rob Rogers, one of Collier’s brothers, who helped manage the memorial’s construction for Boston-based Suffolk Construction.

“In the last two years, there’s been hard times, hard days,” said Rogers, who acknowledged that he was hesitant, at first, about working on the project — but then soon decided to throw himself into it.

In looking at all the offices and spaces around MIT with pictures and remembrances of Collier, Rogers recalled, “I realized that he’s still here. … He wasn’t just a cop to you. He was your friend.”

Rogers also said that seeing the memorial finished was both moving and, despite the sadness involved, an exciting moment for him.

“I’m so proud of what we’ve done,” Rogers told the audience on Monday. “This has been the best project I’ve ever done.” He added: “Thank you for letting me spend some more time with Sean.”

When MIT’s leaders decided to build a memorial to Collier, they wanted to create a site “that would be worthy of MIT, and would also bring the community together,” as Hashim Sarkis, dean of the School of Architecture and Planning, said Monday night.

Yoon considered many concepts for the design, but a breakthrough occurred after the committee provided her a dossier of suggestions from the community about potential forms for the memorial, consisting of over 100 “very thoughtful ideas,” many from people who knew Collier.

“That’s how I learned about Sean’s life,” Yoon said. Eventually the form took shape: five radial walls that could be interpreted as a hand, but that would also create separate spaces. The empty space in the middle is inspired by the shape of stones often found in memorial cairns — a reference to Collier's love of the outdoors, since he had become an active member of MIT’s Outing Club, a hiking group.

“That cairn would be present as an absence,” explained Yoon, who added, “The notion of the open hand is one of service and generosity.”

Beyond the shape of the memorial, Yoon wanted it built from stone — as opposed to, say, steel or concrete — to symbolize Collier’s connectedness with MIT. However, that created a new challenge: How could a massive set of stones, in the shape of a five-fingered arch, reinforce each other and stand firmly in place?

Few experts are in a position to assess whether a bold new architectural design made from stone will work. But one of them — Ochsendorf — works more or less down the hall from Yoon.

Ochsendorf is both a trained engineer and an architectural historian whose work has often focused on the ways in which older buildings have incorporated engineering principles into their forms — from Roman arches to the famous King’s College Chapel in Cambridge, England.

“We had been working for about 15 years for a project like this,” Ochsendorf said on Monday.

Suddenly, all of Ochsendorf’s years of study and analysis around the world could be applied to a new structure on the MIT campus. After all, as Ochsendorf said last evening, “You can’t just invent any form and have it stand up.”

In particular, to see whether an arch will hold, Ochsendorf said, consider a dictum from the 17th-century English scientist Robert Hooke: “As hangs the flexible line, so but inverted will stand the rigid arch.” That is, imagine you are holding both ends of a small piece of string, while letting the middle drop. That shape — if flipped up into an arch — will be optimal for building.

Ochsendorf and several MIT students soon got to work analyzing Yoon’s design, seeing whether each “finger” of the structure would hold — no trivial question, since the amount of force in each ranges from 20,000 to 50,000 pounds. Using computer simulations and a fabricated model, and testing the design even in simulated earthquakes much stronger than anything New England has ever experienced, Ochsendorf’s group came to its conclusion: The design would work.

Building it: “Then the snow arrived”

By that point, the Collier Memorial had seen significant progress. But much of the project’s hardest work still lay ahead — starting with finding the right quality of stone. No one can just pick up a phone and order 32 large pieces of granite cut to precise, irregular shapes.

The team settled on a granite quarry in Virginia as its source of stone, and Yoon started leading trips every three weeks to see if the pieces of granite being produced could be cut to size. Eventually, they found 32 suitable pieces, then had them shipped to the Quarra Stone Company in Madison, Wisconsin, for specialized, millimeter-level precision cutting, by hand and by robot. The size and shape of some stones proved so demanding that Quarra worked on some for a week straight, 24 hours a day.

By October, construction on the memorial had started, between MIT’s Stata Center and Koch Institute for Integrative Cancer Research. The team began building the Collier Memorial from the center out, Ochsendorf noted — that is, they started with the keystone and the ringstones surrounding it, to get the best possible fit on this crucial part of the structure. Using scaffolding, the crew began assembling the memorial, and by January, had made good progress.

“Then the snow arrived,” Ochsendorf said.

Starting in late January, the area received all-time record snowfall — 110.3 inches for the winter in Boston — that complicated matters. The team persevered, and by the spring, was ready for the most important moment of the entire process: the removal of the scaffolding.

Given the weight of the stones involved, the crew used an abundance of caution, lowering the scaffolding by tiny increments, over an eight-hour span, while continuously checking the weight placed on a series of 10,000-pound scales on the ground: If the weight diminished, it meant the memorial was standing on its own, and not reliant on the scaffolding — which is what happened. Ochsendorf and the other engineers had estimated that the keystone could settle 5 to 15 millimeters lower without scaffolding; it settled 6 millimeters, close to the optimal amount.

A place to reflect

The opening ceremony for the memorial, tomorrow at noon, will, in a sense, bring to a close the long process of designing and building the memorial.

But Wednesday’s ceremony is also the opening of a new public place at MIT.

“As you’re under that space, you can pause to reflect,” said Yoon, who hopes it will be both an “everyday site for the MIT community” and a way to “help us remember Sean.”

Building the memorial was not easy, but as Rogers made clear on Monday night, it turned into a labor of love for a whole group of people hoping to remember Sean Collier and his values.

“It shows what you can do when you put your mind to something,” Rogers said.

‘He was truly one of us’

‘He loved us, and we loved him’