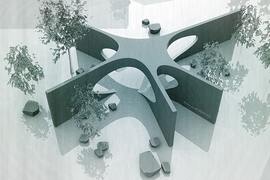 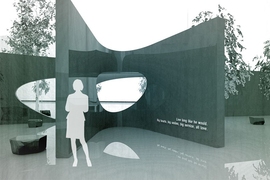 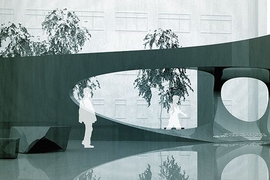 At this morning’s ceremony of remembrance marking the one-year anniversary of the death of MIT Police Officer Sean Collier, J. Meejin Yoon, an associate professor of architecture at MIT, unveiled her design for a permanent memorial to Collier.

The memorial will be situated at the spot where Collier was shot on April 18, 2013, between the Stata Center and the Koch Institute for Integrative Cancer Research at the northwestern corner of MIT’s North Court.

“The Collier Memorial has been the single most difficult, emotional, and meaningful project I have ever worked on,” Yoon said at this morning’s commemoration, adding that the design “was inspired by the gesture of an open hand. … It transforms this site of tragedy into a site of reflection.”

The following language, now posted at the site where the memorial will be built, describes the design, and Yoon’s inspiration for it:

“The Collier Memorial is a space of remembrance and reflection that honors Sean Collier and his service to the Institute. The memorial represents and translates ‘Collier Strong’ into a physical form of strength and connectedness. Structured as an ‘open hand,’ the five radial walls are interconnected through a series of reflection gardens. The shape of the memorial evokes the absence of a large figure at the center of the five ‘fingers,’ creating in the void a unifying central space of remembrance.

“Embodying strength, the Collier Memorial will be made of solid granite sourced from domestic quarries. Its five solid stone walls converge toward the center to support a ‘keystone’ which unifies the structure. The walls act as buttresses to support the arches and center vault. This timeless building method exemplifies strength through collective unity.

“The open center, at the intersection of the five walls, creates an intimate space for contemplation, shielded from the activities on Vassar Street and the MIT campus beyond. The concave geometry of the central void provides a space of pause under its vaulted ceiling. An inscription, etched into the stone, states: ‘In the line of duty, Sean Collier April 18, 2013.’ Standing in the center, the five fingers frame significant views outward. To the south is framed a view of where Officer Collier’s car was parked when he was attacked. Views of Cambridge and the MIT campus are framed through the other arches.

“The open hand metaphor is evocative of the aspirations of MIT, ‘Mens et Manus.’ In an age of unknowable threats, it is important to remember what type of society we aspire to be: We choose an open hand over a closed fist. The Collier Memorial offers the opportunity to remember the life of Officer Collier and honor his service, as well as reminds us of our values as a community and a society: openness in the face of threat, unity through diversity, a common purpose shared by many, and strength through community.”

The Collier Memorial design was refined through the work of a Sean Collier Permanent Memorial Committee, whose members are:

The project team is as follows:

39 members of the MIT Strong team continue training — and fundraising