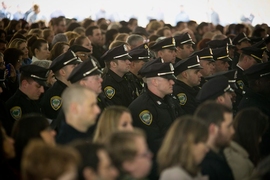 ↓ Download Image
Caption: Members of the MIT Police, colleagues of the late Sean Collier, received a standing ovation as they filed in to take part in Friday's tribute ceremony.
Credits: Photo: Dominick Reuter 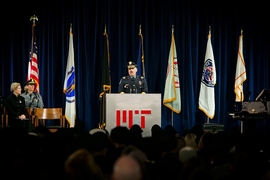 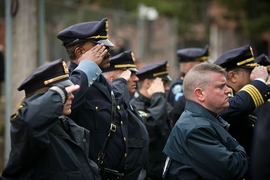 ↓ Download Image
Caption: The MIT Police and community remember Officer Sean Collier on the one-year anniversary of his death in the line of duty.
Credits: Photo: Dominick Reuter 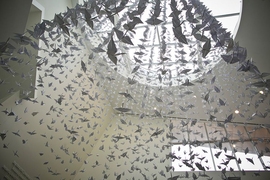 ↓ Download Image
Caption: Hundreds of origami paper cranes have been made over the past several months by members of the MIT community in memory of Sean Collier, and are displayed at MIT's Stata Center.
Credits: Photo: Dominick Reuter 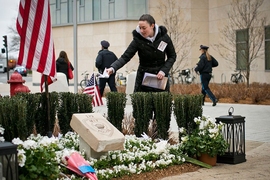 ↓ Download Image
Caption: A visitor places a paper crane on a temporary memorial erected in honor of MIT Police Officer Sean Collier, near the spot where his life was taken. The temporary marker will be replaced by a permanent memorial, whose design was unveiled on Friday, to be built over the coming months.
Credits: Photo: Dominick Reuter 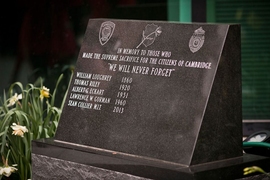 Caption:
Members of the MIT Police, colleagues of the late Sean Collier, received a standing ovation as they filed in to take part in Friday's tribute ceremony.
Credits:
Photo: Dominick Reuter

Caption:
The MIT Police and community remember Officer Sean Collier on the one-year anniversary of his death in the line of duty.
Credits:
Photo: Dominick Reuter

Caption:
Hundreds of origami paper cranes have been made over the past several months by members of the MIT community in memory of Sean Collier, and are displayed at MIT's Stata Center.
Credits:
Photo: Dominick Reuter

Caption:
A visitor places a paper crane on a temporary memorial erected in honor of MIT Police Officer Sean Collier, near the spot where his life was taken. The temporary marker will be replaced by a permanent memorial, whose design was unveiled on Friday, to be built over the coming months.
Credits:
Photo: Dominick Reuter

In a moving tribute to the life and legacy of fallen MIT Police Officer Sean Collier, some 1,500 members of the MIT community and the Collier family — along with local and state political representatives — honored the young officer’s strength, devotion, and vitality on the first anniversary of his death. This morning’s gathering took place mere feet from the spot where Collier’s life was taken on April 18, 2013.

At the ceremony of remembrance, Cambridge Mayor David Maher announced that the corner of Vassar and Main streets, near where the violent confrontation took place, would be renamed as “Officer Sean Collier Square,” which the mayor described as “a small way that the city can show our appreciation.” Plans for a permanent memorial at the site — a granite structure symbolizing an open hand but with an empty space for reflection at its center, designed by associate professor of architecture J. Meejin Yoon — were also unveiled at the ceremony.

“I grew up at a time when young boys had heroes,” said John DiFava, MIT’s director of facilities operations and security, and also the chief of the MIT Police. Over the years, his belief in heroes had faded, DiFava said, but thanks to Collier’s example, “although it came at an awful price, I now know that heroes still walk on God’s earth.”

Collier “was truly one of the brave ones,” DiFava said. “We must never forget the price he paid so this very special community could be safe. I will never forget the lessons he taught me. … The very best way we can honor his memory is to live our lives the way he lived his: with honor, kindness and compassion.”

Several of those who knew Collier spoke of his extraordinary interest in, and connection with, those around him — and his drive to participate in every possible way with the life and activity of the campus.

Israel Ruiz, MIT’s executive vice president and treasurer, recalled an encounter with Collier just two months before the officer’s death, when he was dispatched to drive Ruiz and his wife home after the city was paralyzed by a snowstorm. As they were stopped at a red light — even though there were no other cars around — a stranger approached the car holding a map, trying to find his way. Collier, Ruiz recounted, rolled down his window and spent several minutes helping the man, who was unfamiliar with Boston, figure out where he was going.

Two months later, Ruiz said, on the evening of last April 18, strangers once again approached Collier’s car, this time as he sat behind the wheel of his police cruiser on campus. The result, Ruiz said, was a senseless tragedy.

“I remember Sean as he was that snowy night, …helping a stranger,” Ruiz said, noting that MIT remains “a community that will always roll down the window when asked for help.”

In the outpouring of love and support from the community, the nation, and the world since that tragic event, Ruiz said, “MIT has been lifted in up countless ways over the past year. … The magnitude of the support I witnessed this past year is unmatched in my experience.”

Sen. Elizabeth Warren said that after horrifying events — such as last April’s Boston Marathon bombings, which were followed three days later by Collier’s murder — “such terror can break a people’s spirit.” But she added that in this case, “we did not waver.” Collier’s service and vitality will be remembered, she said: “He will always live on in our hearts.”

Sara Ferry, an MIT graduate student in nuclear science and engineering who knew Collier through his involvement in activities such as the MIT Outing Club, said, “Sean was a friend to everyone on campus. … Sean embodied the spirit of MIT and its students. He sought out challenges and adventure. He wanted to engineer clever solutions to every problem he encountered.”

“Sean was taken from us in a moment of extraordinary evil, but that does not change how we remember him,” Ferry said. “Sean’s life was lost, but his spirit remains and has been amplified a hundredfold. … Love will be his legacy… This community has been strengthened by countless new bonds of friendship and support.”

As part of the many tributes and honors to Collier’s memory, two teams of runners — one composed of MIT students, faculty, staff, and alumni, and the other of Collier’s family and friends — will run in Monday’s Boston Marathon in his honor. Members of those teams took part in this morning’s anniversary tribute.

As Jay Perault, deputy chief of the MIT Police, summed it up, “Sean has changed us all forever. … It was an honor to know Sean, it was an honor to work with him. … His values, compassion and love of life are what I remember.”

“A select group rallied together and organized an independent project called ‘Cranes for Collier,’ and asked people to help create as many mini paper cranes as possible for a display in Collier’s name that would demonstrate the strength and support of the MIT community,” writes Boston Magazine reporter Steve Annear.

CBS reports on the ceremony held April 18 to honor Officer Sean Collier, as well as plans for a permanent memorial to be constructed in his memory.

Reporting for WBUR, Bob Oakes and Shannon Dooling look back at the night Officer Sean Collier was killed.

“At a service on MIT’s North Quad — near where Collier was fatally shot, and where MIT will place a permanent memorial to him — MIT Police Chief John DiFava called Collier a ‘hero,’” reports WBUR’s Fred Thys about the memorial service commemorating Officer Sean Collier.

WCVB’s Jack Harper reports on the ceremony held to honor Officer Sean Collier and the rally to support the MIT Strong marathon team, which is raising funds for the Collier Memorial Fund.

Michael Muskal of the Los Angeles Times reports on MIT’s remembrance for Officer Sean Collier, as well as efforts to raise funds for the Collier Memorial Fund, which will pay for scholarships at MIT and at the Massachusetts Police Academy.

Boston Globe reporters Laura Crimaldi and John Ellement describe the tributes to Officer Collier during an April 18 ceremony. “Sean embodied the spirit of MIT and the students,’’ said [Sara] Ferry. “We are so grateful that he was part of lives at MIT. When Sean left us, love rushed in. Love will be Sean’s legacy at MIT.’’

“During a remembrance ceremony at MIT, Officer Sean Collier is recalled as a young man with a kind heart, an adventurous spirit, spot-on instincts and someone with the willingness to help a stranger,” reports Sharman Sacchetti for FOX 25.

More than 1,600 people gathered at MIT for a remembrance ceremony in honor of Sean Collier on April 18, reports Daniel Lovering of Reuters.

“On Friday, friends, family and residents of greater Boston came together to insist that Sean Collier, remembered as an outgoing and friendly MIT campus police officer, will not be forgotten,” writes Washington Post reporter Wesley Lowery of the memorial ceremony held for Sean Collier.

Josh Brogadir reports on the ceremony held to honor the life and legacy of Officer Sean Collier and MIT’s plans to honor Collier’s memory going forward for NECN. “The intersection of Vassar and Main will forever be Sean Collier Square, a way to remind generations of MIT students and the Cambridge community of this 27 year old who contributed so much,” Brogadir reports.

39 members of the MIT Strong team continue training — and fundraising